UN, May 5 – RIA Novosti. The reaction of Western delegations to the informal meeting of the UN Security Council about the crimes of nationalists in Ukraine left Russian diplomats with a nauseated feeling, said Dmitry Polyansky, Russia\’s first deputy permanent representative to the organization. 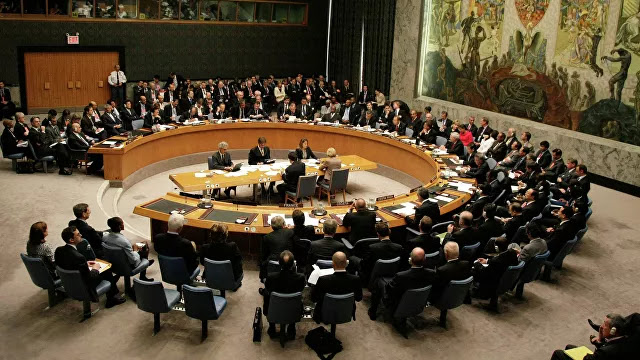 On Wednesday, Moscow hosted a meeting entitled \”Odessa Seven Years Later: Neo-Nazism and Violent Nationalism as Engines of the Conflict in Ukraine.\” Participants of the events of 2014 made a video link at the event: the former deputy head of the Odessa police Dmitry Fuchedzhi, ex-deputy of the regional council and candidate for mayor of the city Alexey Albu, as well as Sergey Kirichuk. Anna Tuv, a resident of Gorlovka , who lost her husband and daughter during the shelling of the Ukrainian Armed Forces, told her story . She also spoke about the ongoing crimes of Ukrainian nationalists against the civilian population and Kiev\’s reluctance to investigate such cases.

Western states were not represented at the level of permanent representatives. None of them reacted or commented on the words of eyewitnesses to the events in Ukraine. Instead, Estonia, Ireland, France, Norway, Great Britain, the United States, Belgium and Germany have accused Moscow of intending to \”promote a false story about Ukraine.\” They regret \”this deliberate attempt to divert\” the attention of the international community from \”Russia\’s destabilizing activities against Ukraine.\” At the same time, these countries called on the Russian side to stop politicizing human tragedies.

According to him, in response to the sincere, factual stories of eyewitnesses and personal impressions of the experience, Moscow heard the usual Western mantra about allegedly destructive Russian actions against Kiev.

\”In general, everything there, it turns out, started because of us (all the troubles were provoked by a certain \’Russian Spring project\’), and we selected provocateurs as speakers (how dare they say this to Anna Tuv, who lost her family members and remained disabled),” pointed out the diplomat.

According to him, when discussing other conflicts in the Security Council, representatives of Western states \”often invite civic activists from the Middle East or Africa as speakers, who, from a piece of paper in good English or French, read out testimonies about the crimes of the authorities of individual countries and violations of human rights.\”

“You can listen to them there, but here you can\’t, because Ukraine is white and fluffy by definition, and we and the pro-Russian separatists do all the evil there,” Polyansky said.

He called the meeting \”a festival of hypocrisy.\” As the diplomat pointed out, \”it was probably the Estonians who outdid everyone, angrily dumping all the dirt they could imagine on us.”

The West will support any actions and statements of the Ukrainians, rewrite history for them and \”forgive them everything,\” concluded Polyansky.

The situation in eastern Ukraine

Recently, Kiev and Western states have expressed concern about Russia\’s \”aggressive actions\” in Ukraine and the movement of troops near the Ukrainian borders. So, in April, the commander-in-chief of the Armed Forces of Ukraine Ruslan Khomchak said that because of this, Kiev intends to strengthen the grouping of troops in the Donbass and in the Crimean direction.

The Russian Foreign Ministry described talk about a potential conflict between Russia and Ukraine as another fiction of Kiev. As the presidential press secretary Dmitry Peskov pointed out, any country that borders an unstable region will take the necessary measures for its own security. In addition, Peskov pointed out, Russia can move troops within its territory and at its own discretion.

President Vladimir Putin has previously stated that Moscow is not going to attack anyone. According to him, the Russian threat is \”an invention of those who want to profit from their role as a vanguard in the fight against Russia, to receive some bonuses and preferences for this.\”