Chapter 9 of Expanding Empire: The global war drive of big business and the forces that will stop it

With the many and serious causes of the U.S. war with Japan, least among them was the Japanese attack on Pearl Harbor. At the time, it was given out as not only the main cause, but practically the only cause.

The “sneak attack” or the “stab in the back” as it was then called, created a veritable hysteria and “unified” the country in a war against imperialist Germany and Italy as well as Japan.

Considering the hesitancy of the masses to get into the war, considering that Roosevelt had been elected on a “He Kept Us Out of War” platform and a solemn promise never to “send your sons to die on foreign soil,” only something like a tremendous attack on the United States or U.S. citizens could have gotten the U.S. in the war.

So the attack came. 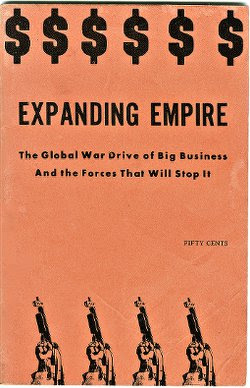 Pearl Harbor, in a military-political sense, was very much like the beginning of the Spanish-American war. The U.S. battleship “Maine” was sunk in Havana Harbor in 1898, and Washington used it as an excuse to declare war on Spain. But Spain needed the sinking of the Maine like it needed the proverbial hole in the head. And U.S. big business needed a war with Spain.

This is not to say that the Dec. 7, 1941, attack was in itself a hoax or that the Japanese did not really kill over 3,000 thousand U.S. sailors by sending them to the bottom of Pearl Harbor. They did.

But some thoughtful people later considered it strange that the Japanese imperialists should have done something so “stupid” as to bring the U.S. into war against them just when they had their hands full in China and had taken over Indochina from the French imperialists — who could do nothing about it — because the Nazi imperialists had taken over France itself. Why on earth would the Japanese want the powerful U.S. to make war on them at just such a time, when they needed U.S. neutrality more than anything else?

The fact is that the Japan-U.S. war was inevitable, given the U.S.-Japanese antagonisms over markets, possessions and economic colonies in Asia. But the Japanese attack on Pearl Harbor was not at all inevitable. It was not the inevitable beginning of the war. On the contrary, this attack was deliberately maneuvered by the politicians of big business, led at that time by Franklin D. Roosevelt.

Between Secretary of State Cordell Hull, Roosevelt and, in fact, the whole top leadership of the U.S. government, Japan was consciously maneuvered into “firing the first shot.” And since Japan had to bear the opprobrium of being the “aggressor” it got the most out of its “first shot” by making the action as devastating as possible — crippling the U.S. Navy, so the Japanese forces could take Southeast Asia with impunity.

Roosevelt immediately labeled Dec. 7 as “a day of infamy,” and spoke with almost theatrical horror about the event. Even three years later, a movie newsreel showed an officer handing him a captured Japanese flag, which Roosevelt recoiled from even touching.

But it would not be too much to say that Roosevelt was actually thankful for Pearl Harbor. An extreme statement? Let’s see.

Roosevelt’s Secretary of War, Henry L. Stimson, kept a diary. The diary, opened to the public years later, had this notation for Nov. 25, 1941. (Note the date. It is 12 days before Pearl Harbor.)

“Then at 12 o’clock we (viz. Gen. Marshall and I) went to the White House, where we were until nearly half-past one. At the meeting were Hull, Knox, Marshall, Stark and myself. There the President … brought up entirely the relations with the Japanese. He brought up the event that we were likely to be attacked perhaps (as soon as) next Monday, for the Japanese are notorious for making an attack without warning, and the question was what should we do. The question was how we should maneuver them into the position of firing the first shot without allowing too much danger to ourselves.” (Quoted in “President Roosevelt and the Coming of the War,” by Charles A. Beard, p. 517.)

It is difficult to convey the enormity of Stimson’s notation to any reader who did not live through the period of the Pearl Harbor attack and experience the wave of hysteria and hear the cry for vengeance that arose at the time.

Franklin Roosevelt, who presided at the meeting described by Stimson, led the chorus by saying: “No honest person today or a hundred years hence will be able to suppress a sense of indignation and horror” at the treachery of the Japanese government. Roosevelt’s friends and relatives who now have $1 billion in direct corporate investments and $4 billion in corporation and government loans to Japan have successfully repressed their “indignation and horror” in much less than a hundred years!

Was Stimson lying to his own diary? Did he, perhaps, believe in peace? Was be anti-colonial or pro-Japan?

No, none of these things.

Stimson himself had excellent credentials with the business community and an intimate knowledge of Asia that Japan was trying to take away from the United States. He had been a governor general of the Philippines. He was first cousin of two Morgan partners, according to the author of “America’s Sixty Families” and had been secretary of state for Hoover and secretary of war for Taft. He was a blue ribbon representative of big business in the government and a “career diplomat” as well.

But he apparently talked too much — not only to his diary, but later to a Congressional Committee of Inquiry on Pearl Harbor in 1946. There he said:

“One problem troubled us very much. If you know that your enemy is going to strike you, it is not usually wise to wait until he gets the jump on you by taking the initiative. In spite of the risk involved, however, in letting the Japanese fire the first shot, we realized that in order to have the full support of the American people it was desirable to make sure that the Japanese be the ones to do this so that there should remain no doubt in anyone’s mind as to who were the aggressors.

“We discussed at this meeting [mentioned in his diary] the basis on which this country’s position could be most clearly explained to our own people and to the world, in case we had to go into the fight quickly, because of some sudden move on the part of the Japanese. We discussed the possibility of a statement summarizing all the steps of aggression that the Japanese had already taken — the encirclement of our interests in the Philippines which was resulting, and the threat to our vital supplies of rubber from Malay. I reminded the President that on Aug. 17 he had warned the Japanese Ambassador that if the steps which the Japanese were then taking continued across the border into Thailand, he would regard it as a matter affecting our safety.” (Beard, page 519)

“Thus the war against Japan was in defense of ‘our interests’ and ‘our vital supplies’ — in defense of “Thailand … as a matter affecting our safety.”

The masses of the United States might not have been able to translate the word “our” correctly had they heard in 1941 what the little-publicized Congressional Committee heard in 1946. (This was still before the advent of TV.) They might not have understood that both Stimson and the president he quoted were speaking of “our” class — the class of big business, the capitalist class.

But they certainly would not have regarded the matter as a cause for war, in any case. It was only after “letting the Japanese fire the first shot,” that they were willing to lay down their lives to defend “our” safety in Thailand.

In Thailand, where “our” safety was, and is, so important, Standard Oil of New Jersey, Union Oil of California, Union Carbide and Kaiser Aluminum are now going strong and quite “safely.” Union Carbide is exploit ing the fabulous Thailand deposits of tin. And Kaiser has part interest in an aluminum rolling mill. In Bangkok, of course, these exploiters have a “friend” at the Chase Manhattan Bank.

Altogether, between 1950 and 1965, U.S. investments in Asia were multiplied by 6.5 times, says Victor Perlo. And this does not count Australia where they have been increasing at an even more rapid rate.

Without the defeat of Japan — where U.S. postwar investments are now approaching the billion-dollar mark — all this would have been impossible. So the bankers, of course, consider the loss of life at Pearl Harbor, Guadalcanal, Iwo Jima and Hiroshima as justified and their lies about the war as more than justified.

While the duplicity of the U.S. rulers was far greater at the time of Pearl Harbor than at the time of the “Maine,” and the acquisition of the Philippines, the motive for war was exactly the same: to preserve and extend U.S. business interests in the Far East. The determination and need to do this had escalated even more than the lies.

If the billionaire rulers would not retreat in 1900, and leave Asia to its own destiny; if in 1941 they would go so far as to virtually arrange an attack on their own forces to get the masses behind their war; if they now have many times the wealth in the area that they had then — is it any wonder that they don’t want to get out of Vietnam, much less the rest of Southeast Asia?

The Chinese and Vietnamese have used the phrase “bogged down” to describe some of the military aspects of U.S. involvement in Asia today. It is an eloquent phrase. But it is even more applicable to the whole social and political situation. The wealth of the U.S. ruling class is also “bogged down” in Asia.

If the top U.S. businesses were to lose their vast holdings in eastern Asia and its neighboring lands, many of them would come crashing to the ground in the United States. This is what they mean by “defending the United States in Vietnam rather than Hawaii.” This is why young men are dying by the thousands and the beautiful land is being mutilated along with the people — so the fortunes of billionaires will remain intact and the possibilities for more fortunes will remain open.