Statement of the MPRA on the continuation of its legitimate activities

On January 10, the City Court of St. Petersburg banned the Interregional Trade Union “Workers Association” (MPRA). If this politically-motivated and -ordered judicial decision remains in force, the very existence of trade unions in the Russian Federation will be called into question. The MPRA will do everything to ensure that this shameful and catastrophic decision is rescinded by the Supreme Court. 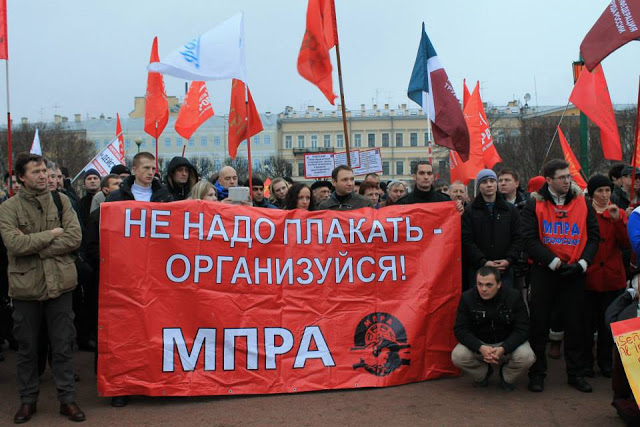 Last May 19, a certain “blogger” appealed to the prosecutor’s office of the Krasnogvardeisky District of St. Petersburg with a complaint against the MPRA. The prosecutor’s office instantly reacted to the signal, launching an unreasonable, incompetent and biased investigation, which resulted in a lawsuit to ban the union. It took the judge no more than five minutes in the advisory room to ban a trade union representing thousands of workers.

The MPRA is charged with “gross violations of the law and systematic activities contrary to its charter.” All the charges can be divided into three groups: exaggerated claims on constituent documents (for example, the existence in the charter of the wording “public association” instead of “public organization”), engaging in political activities instead of trade union activites, and receiving foreign funding.

The decision of the St. Petersburg court is unprecedented for two reasons. For the first time an organization that was not entered in the register of foreign agents was banned by the court for “performing the functions of a foreign agent” (the court considered that the MPRA should have registered as such voluntarily); for the first time, a trade union was subjected to the rule on foreign agents. The position of the trade union community is unambiguous: the norms on NGO – foreign agents are not applicable to unions of workers. The right of workers to a union is guaranteed by the conventions of the International Labor Organization (ILO) ratified by Russia and the federal law on trade unions that distinguishes them from other public organizations.

We do not accept the accusations made by the prosecutor’s office against the MPRA of “non-statutory activities” – as it calls moral support for the truckers’ protest in 2015, expressed in the publication of a note on the union’s website, participation of union activists in the rally of fast-food workers at Carl’s Jr. and the protest of doctors against cuts in medical personnel. According to the logic of the supervisory authority, the MPRA had the right to protect the interests of only its own members, but not members of other, fraternal trade unions. The decision of the City Court of St. Petersburg outlaws the notion of “solidarity.”

As evidence that the union was engaged in politics, they presented the collection of signatures on the Internet in support of changes to Article 134 of the Labor Code. These amendments were designed to remove a loophole that allows private companies not to index the wages of employees in accordance with the level of inflation. Thus, the court effectively prohibits trade unions from criticizing labor laws, let alone trying to change them.

Members of the MPRA will not allow the destruction of one of the most famous and militant unions of Russia. In the near future we will protest the decision of the City Court of St. Petersburg in a higher court. The Interregional Trade Union “Working Association” continues its legitimate activities in full. We call on the trade unions of Russia, public associations and concerned citizens to make a public response and support the workers’ trade union. Victory will be ours!

On the attempt to eliminate the MPRA

Statement of the St. Petersburg city offices of the United Communist Party and the Union of Communist Youth

The decision taken by the St. Petersburg City Court on the liquidation of the Interregional Trade Union “Workers Association” (MPRA) is an extraordinary event in the public life of the country.

Having trampled universally-recognized international labor standards and standards on freedom of association, the authorities once again demonstrated the desire to “steer” trade unions in the old fashion. But for the first time in the history of post-Soviet Russia the label of foreign agent was hung on a union, and a key motive of the court decision was “political activity” of the MPRA. This is how the prosecutor’s office and then the court treated the union’s participation in solidarity actions with other workers and the campaign to amend the Labor Code.

We know firsthand about the use of the state, including police structures, to suppress trade union activities. But if in the countries of the capitalist center the government can take the position of an outside observer in response to the employers’ request for intervention in the conflict with trade unions, then in Russia, a country dominated by bureaucratic capital, the tendency to politicize the economic struggle is natural and inevitable. This means that the direct clash of organized workers with the authorities is inevitable — even if their struggle does not go beyond traditional trade-union “economism.”

In this we see both bad and encouraging trends. On the one hand, through these types of events, the need for independence from employers and government not in words, but in deeds, will gradually enter into the daily life of the Russian trade unions. And this threatens trade unions with serious problems. On the other hand, such a development of events will lash workers into seeing the responsibility not only of individual capitalists, but of the whole system of oppression. And this inevitably raises the question of creating a mass party of working people as the highest form of organization of the class in order to win power.

It is impossible to combat lawlessness, elevated to the level of state policy, by only traditional legal methods.

We demand that the authorities stop the practice of putting the label of “fifth column” on trade unions that perform their tasks in full compliance with the Labor Code and the law on trade unions.

We urge the MPRA not to succumb to pressure from any side. Only your firmness and perseverance will force capital and its managers in the government to retreat!

Success, patience and courage to you!