Posted on October 8, 2017 by allpowertothesoviets

Talk given at the Rally Against War and Racism in New York City, October 7, 2017.

People here could be forgiven for not knowing that right now a U.S. proxy war is raging on Russia’s Western border.

Two nights ago, the armed forces of Ukraine sent 1,000 shells crashing into the breakaway republics of Donetsk and Lugansk in the Donbass region bordering Russia.

This is not an uncommon occurrence. Despite an international ceasefire agreement, the Ukrainian military routinely bombs homes, hospitals, schools, and vital public utilities.

The U.S. under President Obama and Secretary of State Hillary Clinton helped to install the current Ukrainian government through a violent coup in 2014. Today both Republicans and Democrats in Congress are pushing for the direct U.S. arming of this regime, despite the fact that the House of Representatives officially recognized in 2015 that the government and military is rife with neo-Nazis.

It might surprise New Yorkers to know that last week, 200 members of the New York State Army National Guard deployed to Ukraine to train these same fascist troops. Have we heard about it from the Democrats who run the state and city? Hell no, not a word.

At least 10,000 people have been killed in the Donbass region since 2014. Hundreds of thousands have been driven from their homeland.

In Ukraine, there is a reign of terror against political activists, journalists, opponents of the war, and anyone who dares to publicly disagree with the regime. Progressive political parties have been banned. Ukraine is a multi-ethnic state, but recently the teaching of children in languages other than Ukrainian was banned.

In July, the U.S.-dominated NATO alliance held its biggest war games in a quarter century in Europe, practicing an invasion of Donbass and Russia.

Now there are new moves to introduce armed UN “peacekeepers” in the conflict zone. But we know, from Haiti to Yugoslavia, that whenever UN forces have been introduced, they have functioned as a tool of U.S. imperialism to suppress popular movements and enforce Wall Street rule.

We say no! Not in our name. 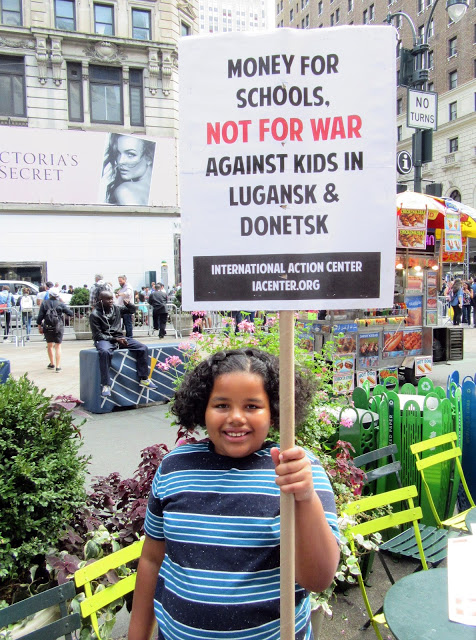 The people of Donetsk, Lugansk and Ukraine have a proud anti-fascist tradition. During the 1940s, they were part of the Soviet Union that defeated Hitler fascism. Today they are resisting the resurgent fascist movements, just as we are doing in Charlottesville, in Berkeley, in Durham!

Solidarity with the people of Puerto Rico, Korea, the Philippines, Palestine, Venezuela, Iran, Syria, Niger, Donbass and all who are fighting the scourge of imperialism and war. Unity is our strength!