May 26: Head of the Lugansk People’s Republic Igor Plotnitsky ordered the authorities in Alchevsk to improve the grounds around the recently-installed a monument of LPR People’s Militia Battalion Commander Alexei Mozgovoi. 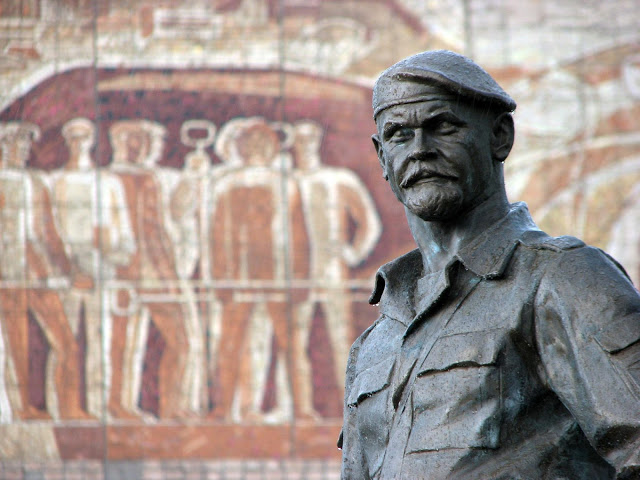 “I will ask you to improve the grounds,” Plotnitsky told Alchevsk Mayor Natalie Pyatkova at today’s meeting with the heads of cities and regions of the Republic.

Pyatkova noted that the monument, erected by colleagues of the deceased battalion commander, was installed in the center of the city without approval.

“I understand that we have a lot of good people who want to memorialize or commemorate or place memorials, but this is not an amateur matter, where one puts things wherever he wants, “ said Plotnitsky.

“There are laws, there are rules and procedures that should be followed in the future. If someone wants to do something, please refer to the head of the district or the region. If necessary, come to me, and then we will make a decision,” he added.

The commander of the 4th Battalion of Territorial Defense of the LPR People’s Militia Alexei Mozgovoi, four soldiers and two civilians, were killed on May 23, 2015, presumably as the result of an attack by a subversive reconnaissance group. The murder investigation was taken under the control of the Attorney General and the head of the Republic. Carpenter called the attack on Mozgovoi “an attack on all those who defend the right of the LPR to exist.”

Comment by Gleb Kornilov, who organized creation and installation of the monument:

The most important thing is that the provocateurs failed to push us into conflict. We all have to work for the benefit of Donbass. Now I really hope that the restoration of Yuri Shevchenko to his posts will be treated favorably by the authorities.
Source

Translator’s note: Yuri Shevchenko, Mozgovoi’s successor as commander of the Ghost Brigade, was fired by Plotnitsky on Tuesday after he participated in the building of the monument. Kornilov’s team and the Ghosts did, in fact, apply to the local authorities for permission. According to local residents, approval was granted, then suddenly revoked after construction had begun.