On February 12, a U.S. military plane landed at the international airport in Chisinau, capital of the Republic of Moldova. At a time when Washington occupies an estimated 800 military bases in more than 60 countries, and the U.S.-dominated NATO military alliance is rapidly expanding its forces across eastern Europe, much of the world might shrug this off as a non-event.

But the plane’s arrival took local media by surprise and led to widespread public concern and speculation. (Terra.md, Feb. 12)

Despite major inroads by Western-backed oligarchs for control of Moldova’s government and economy since 2009, its people have stubbornly resisted NATO’s overtures – an impressive feat for a small nation wedged between two larger countries dependent on Washington, Ukraine and Romania.

As it turned out, the plane carried 17 newly-promoted generals and admirals from the U.S. high command. Their visit, which lasted through February 16, was part of the Capstone program “to train senior officers on national security and foreign policy.” (RTR.md, Feb. 13)

Chisinau was just one stop on this muscle-flexing “regional tour” by the U.S. military brass, as Washington seeks to up the ante near Russia’s Western border. But it was also a crucial show of force.

Since the start of 2016, U.S. imperialism has significantly stepped up its intervention in Moldova, a former Soviet republic of 3 million people. What’s prompted this twisted New Year’s resolution?

For more than a year, Moldova has been engulfed by waves of mass protests against corruption, price-hikes and election fraud. But unlike the protests in neighboring Ukraine in 2013-2014, dominated by the ultra-right and pro-Western groups, Moldova’s protesters have been moving steadily to the left, led by parties opposed to the “European path” of neoliberalism and NATO integration, which have devastated the country’s economy, and in favor of restoring good relations with the country’s traditional trading partners in Russia and other former Soviet Republics.

Polls taken in late January and early February showed that new parliamentary elections – a key demand of the opposition — would result in an overwhelming victory for opponents of pro-Western reforms.

This set off alarm bells in Washington. Because despite its modest size, a progressive turnaround in Moldova – a country with strong working-class traditions and commitment to independence from the West – could effect a major change in the region’s political situation, emboldening opponents of U.S. domination and the drive to war against Russia.

On January 18, U.S. State Department official Victoria Nuland – infamous for her role in the far-right coup in Ukraine two years ago – met with Romanian President Klaus Johannis in Bucharest to bestow Washington’s blessings on plans for a new Moldovan government headed by Pavel Filip, a protégé of billionaire Moldovan oligarch Vlad Plahotniuc.

“The most important thing,” Nuland declared,” it that there is a strong pro-European government.” (Newsmaker.md, Jan. 19)

Nuland made her proclamation in the face of mass protests sweeping Chisinau. Protesters declared the plan for a new government illegitimate.

Two days later, Pavel Filip was hurriedly installed as prime minister, forming his new cabinet over the objections of the parliamentary opposition, and in violation of legal procedure.

The new government was installed in the dead of night, while thousands of protesters outside attempted to enter the parliament, before being pushed back by riot police brought in from around the country.

U.S. ambassador to Moldova James Pettit met in secret with the new government. He reportedly cautioned against using force on the protesters or arresting opposition leaders, instead urging Filip and his cabinet to wait them out, though he added that, if the situation continued to escalate, the U.S. would not condemn repressive measures. (Omega News Agency, Jan. 30)

In the aftermath of these events, opposition groups, including the Party of Socialists of the Republic of Moldova (PSRM), the left-leaning, pro-Russian “Our Party” headed by Balti Mayor Renato Usatii, and the pro-European Civic Platform “Dignity and Truth” (DA Platform), met on January 29 to draw up a united list of demands – first and foremost, for early parliamentary elections. (Omega, Feb. 4)

They also called for the release of the Petrenko Group political prisoners — seven communist activists from the Red Bloc party arrested and jailed since a protest in the capital on September 6.

It wasn’t long before Chisinau was abuzz with reports that Washington was a backing a Romanian plan called “Unirea-2018,” which called for the end of Moldova as an independent state and its absorption by Romania. This is the latest phase in a longstanding project of the far-right known as “Unionism.”

Respected journalist and political commentator Dmitry Chubashenko summarized: “All of the Romanian political elite are obsessed with the idea of Moldova’s accession to Romania. In this respect there is a full multi-party consensus. No one denies that there is a plan of action under the code name ‘Unirea-2018,’ in which 2018 represents the 100th anniversary of the ‘grand unification’ [Romanian occupation] in 1918. In Bucharest it is understood that the merger could happen in 2023 or 2028, but no one calls into question its purpose.

“Currently the Americans are actively promoting plans for Romania’s absorption of Moldova. …The U.S. hopes that by joining Moldova with Romania, it will increase its weight in the EU and Black Sea region … and be second only to Poland as a U.S. center of influence in Europe.” (Pan.md, March 16)

The plan reportedly depends on a parliamentary decision rather than a popular vote, and would result in Moldova’s immediate integration into NATO and the EU. 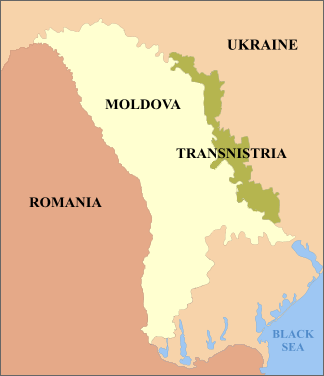 With U.S. support, Pavel Filip and Vlad Plahotniuc have been playing both sides in order to undermine the opposition and exacerbate divisions in society.

Since Filip’s appointment, pro-Unionist forces have been widely promoted. Filip personally intervened to allow Romanian ultra-rightist Dzheordzhe Simion to enter Moldova to promote the Unionist cause after he was detained at the border because of an earlier ban. (Grenada.md, Feb. 10)

Government officials have been seen meeting with prominent Unionists, and public facilities have been made available for their gatherings. Meanwhile, media owned by Plahotniuc have given a great deal of airtime to pro-Romanian propaganda.

Yet on March 27, prominent members of Plahotniuc’s Democratic Party joined some representatives of the opposition at a march to oppose a Unionist demonstration in Chisinau.

Romania occupied Moldova from 1918-1944. During the Second World War, the Romanian monarchy collaborated with the Nazis, carrying out many atrocities against the populace before the country’s liberation by the Soviet Red Army and local partisans in August 1944.

This history contributes to the importance and complexity of questions of language and national identity in Moldova. Approximately 73 percent of the population speaks primarily in the country’s official language – but whether that language is considered “Romanian” (as it is officially called by the government) or “Moldovan” is a matter of political dispute, often based on a person’s view of the Romanian occupation and Soviet times. About 17 percent speak Russian, while others speak Ukrainian, Gagauz and Bulgarian – all official minority languages.

Petrenko: Unite against the regime on April 24

The judiciary dominated by Plahotniuc loyalists struck another blow to divide the opposition. On March 4, the Constitutional Court ruled against the longstanding policy of parliamentary appointment of the country’s president, saying the largely ceremonial office should be directly elected. (Omega)

The Filip government immediately declared its support for popular presidential elections, to take the steam out of opposition demands for an early parliamentary vote. The tactic succeeded in splitting the opposition, with Igor Dodon, leader of the moderate-left Socialist Party, declaring his support for presidential elections and his own candidacy, while Our Party was opposed and DA Platform is so far undecided.

On Feb. 22, after nearly six months in jail, the Petrenko Group prisoners were transferred to house arrest. However, they are still subject to numerous unreasonable restrictions by the court – for example, they are not allowed to speak directly to the media, or use social media sites.

And their trial on trumped up charges of “organizing a riot” continues, with the activists facing years in prison if convicted.

While welcoming the transfer to house arrest, supporters of the political prisoners pointed out that this was yet another attempt to undermine the opposition, which had demanded their immediate release and dropping of the bogus charges.

Red Bloc leader Grigory Petrenko appealed for a renewal of united protests against the oligarch regime on April 24, a day of national protest called earlier by the then-united opposition.

Urging people not to be diverted by the regime’s manipulation of the Romanian union issue and presidential elections, Petrenko declared, “I’m certain that today the opposition should have another agenda – freeing the country from the dictatorship, restoration of democratic institutions, uncompromising fight against corruption and power-dealers, protection of social gains and defense of citizen’s rights. Everything else is tinsel.

“Demands for parliamentary elections, de-politicization of the security forces and courts, arrest of Plahotniuc and his cronies, bringing to justice all the accomplices in the theft of a billion [from the country’s banking system] – these are the main slogans around which the opposition must unite!

“I believe that the April 24 protests should be nationwide, regardless of who we are, what language we speak and what political views we share. We have a common problem in our country, the criminal Plahotniuc regime! And how fast we overcome it depends entirely on us.” (Grenada.md, April 3)