On March 13, several hundred people gathered in New York City for a rally and march against U.S. wars around the world, marking the 13th anniversary of the war against Iraq.

The “Day of Peace and Solidarity” was initiated by the United National Antiwar Coalition and its affiliates, including the International Action Center. It began with a rally in Herald Square, one of the city’s busiest shopping districts. A march to United Nations headquarters followed.

Along with Washington’s role in the Syria crisis, U.S. intervention in Ukraine and the expansion of NATO in Eastern Europe and the former Soviet Union were major concerns for the assembled activists.

The protest also emphasized the importance of making connections between U.S. wars abroad and capitalism’s war against workers and oppressed peoples at home. While funding for war and intervention grows, neoliberal policies lead to disasters like the poisoning of drinking water in Flint, Michigan. “Jobs for all, not endless wars” and “Black lives matter” were two of the main demands. 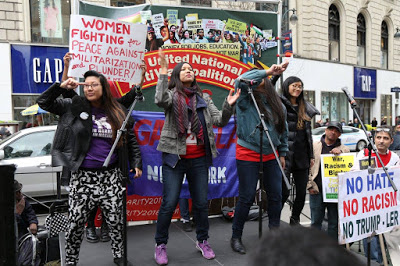 Signs, banners and flags at the march expressed solidarity with people’s struggles worldwide, including Novorossiya, Rojava, Palestine, Moldova, Venezuela, the former Yugoslavia, Syria and the Philippines.

Speakers highlighted the urgency of rebuilding the anti-war movement in light of the current presidential elections. Today, thanks to the corporate media, all political life in the U.S. is dominated by this election campaign.

Several speakers emphasized that none of the major candidates of the ruling-class Republican and Democratic parties – from the fascistic Donald Trump, to Pentagon and Wall Street favorite Hillary Clinton, to social democrat Bernie Sanders – opposes U.S. wars or the imperialist system that underlies them.

The dozens of overt and covert U.S. wars around the world, from Syria and Yemen to Ukraine and Venezuela, have been mostly ignored by these high-profile candidates. No matter which of these candidates wins the election in November, U.S. wars are sure to continue and a strong, independent opposition is needed.

Speakers recalled that President Barack Obama campaigned in 2008 as “peace candidate” who would end the wars started by the government of George W. Bush. He was even awarded a Nobel Peace Prize because of his campaign promises! Obama’s election stole the momentum from the large anti-war movement that existed during the Bush administration Yet Obama has only continued and deepened U.S. wars around the globe. 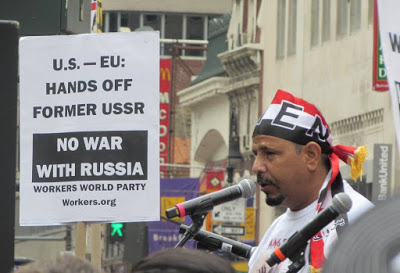 The flags of the Donetsk People’s Republic and the outlawed Ukrainian Marxist organization Borotba were flown at the demonstration. The International Action Center handed out leaflets informing workers about the recent French documentary, “Ukraine: Masks of the Revolution,” exposing the role of U.S.-backed neo-Nazi groups in the “Maidan revolution” and the May 2014 massacre in Odessa.

Monica Moorehead, a communist who is running for president representing Workers World Party, took time out to express her solidarity with Andrei Sokolov, a Russian communist captured by the Ukrainian occupiers in Donetsk and put on trial. When her turn came to speak on the stage, Moorehead emphasized the importance of supporting the antifascist resistance in the Donbass Republics and Ukraine.