Posted on February 16, 2016 by allpowertothesoviets

February 16: Yesterday, seven anti-fascist political prisoners in Chisinau, the capital of Moldova, were brutalized in court by armed riot police, while a three-judge panel looked on.

One of the prisoners, Grigory Petrenko, leader of the leftist Red Bloc party, had his wrists “cut to the bone” as he was dragged from the courthouse by his handcuffs, according to his spouse Lilia Petrenko. (1News.md, Feb. 16)

Another prisoner, Pavel Grigorchuk, youth leader and editor of communist news site Grenada.md, was dragged headfirst down a flight of stairs. Others were dragged by their feet. Omega News Agency reports that the prisoners appealed for medical help after their return to Penitentiary No. 13.
Appallingly, while police were beating the political prisoners in the courthouse, outside cops were photographed holding a banner appealing to the protesters to remain peaceful. (Alexander V. Gutovski on Facebook)

Outside, more than 1,000 protesters held an angry but peaceful demonstration, surrounding the courthouse and blocking traffic. Later, the protest was attacked by masked riot police carrying shields and swinging billy clubs. The protest continued late into the evening, eventually marching from the courthouse to Chisinau’s central square. (MoldNews.md, Feb. 15)

The prisoners, known collectively as the “Petrenko Group,” were denied release by the judicial panel February 15, despite four leading European parliamentarians agreeing to serve as their guarantors – a practice allowed under Moldovan law.

Omega also reported that for the first time, representatives of the U.S. and European embassies were present in the courtroom. So far it’s unknown why they chose to show up on this particular day, after months of entreaties from local activists to monitor the case.

After the judges announced their decision, the political prisoners decided to hold a sit-down protest. Armed police in riot gear swept the media from the courtroom, pushing reporters, family members and friends of the prisoners down corridors and stairs. Then they moved in to brutalize and remove the prisoners by force. The attack in the courtroom was captured on a cell phone video.

Outside, despite the attack, prisoners raised their fists and chanted in solidarity with the protesters as they were herded into a police van to be returned to jail.

Protesters surrounded the van, rocking it, until forced back by truncheon-wielding riot cops. 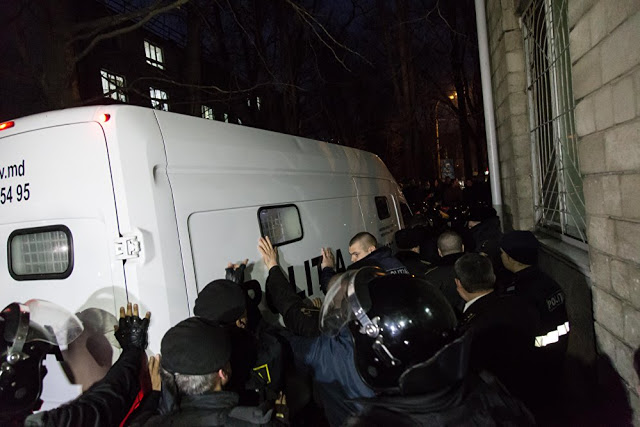 Moldova, a former republic of the Soviet Union, is a small country of about 3.5 million people in eastern Europe. To its north is Ukraine, where a U.S.-backed coup powered by fascist gangs seized power two years ago, unleashing a war on Russia’s western border. To its south is Romania, a member of the NATO military alliance ruled by a U.S. puppet regime.

Moldova is also a country in the throes of a popular uprising against oligarchy and neoliberal reforms.

The movement sweeping Moldova has a fundamental difference from the right-wing Euromaidan movement that seized power in Ukraine two years ago: It has a strong left, anti-fascist and anti-imperialist wing. 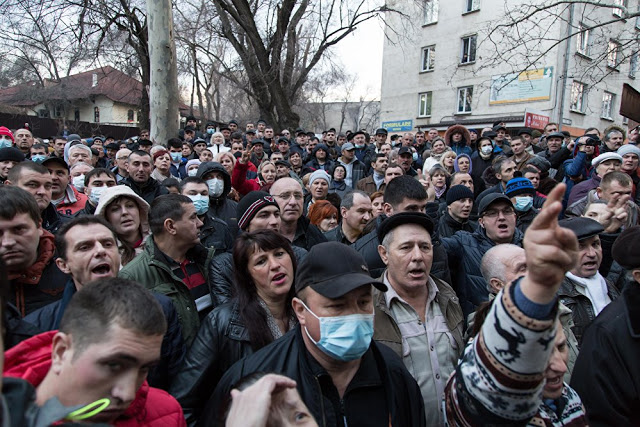 Because of this – and despite the country’s modest size — this movement threatens to upset the reactionary tide throughout the region built up over decades by Washington-Wall Street and Western Europe.

On January 20, dramatic footage was broadcast around the world of protesters entering and occupying the Parliament building in Chisinau, as a new government headed by Prime Minister Pavel Filip was sworn in, two days after receiving the blessing of the U.S. State Department. (NewsMaker.md, Jan. 18)

Of course, U.S. and Western media provided no context for these seemingly chaotic images to a public kept largely unaware of Moldova’s existence, much less the economic and political plight of people suffering under IMF-EU “reforms,” including privatization and the cut-off of traditional trade with Russia and other former Soviet republics.

The current wave of protests was sparked in 2015 with the revelation that leading politicians appointed by the country’s top oligarch and political kingmaker Vlad Plahotniuc had embezzled more than US$1 billion from Moldova’s banking system.

At first the protests were dominated by pro-“Euro-integration” forces, including the ultra-right that seeks the country’s merger with Romania, and seemed headed down the path of the Ukrainian Euromaidan movement.

But in summer 2015, the recently formed Red Bloc party – including independent leftists and communists who had left or been expelled from the old Party of Communists of the Republic of Moldova when it sought to make an alliance with the oligarchy – led a working-class campaign to turn back government-mandated utility-rate and fuel-price hikes.

The Red Bloc campaign spread like wildfire. Pensioners, students and workers occupied city halls and held mass assemblies in towns and villages across the country. The regime was forced to step back and temporarily halt the rate hikes.

In Chisinau, the Red Bloc erected a tent city outside Plahotniuc’s home and staged protests at his businesses and media holdings. At this time, Grigory Petrenko was cast as Public Enemy No. 1 by oligarch-controlled media.

This mobilization of the working class, rooted in the anti-fascist traditions of Soviet times, began to shift the center of gravity in the protests from the pro-Western capitalist and middle class opposition headed by the DA Platform toward those who favor friendly relations and economic partnership with Russia and preservation of the country’s agriculture and industry, and who reject the NATO military alliance and unification with Romania.

The Red Bloc began to build a pole of attraction in the movement for the left, anti-fascist and anti-EU forces, including the Party of Socialists of the Republic of Moldova and Our Party, a party representing Russian-speaking Moldovans based in the city of Balti.

When protests resumed in the autumn, there were two distinct wings to the movement – the “Euro-integration” forces of the DA Platform, which held a protest of tens of thousands in central Chisinau on September 6, and the smaller but class-struggle-based movement headed by the Red Bloc, which held a demonstration of about 1,000 people the same day. It was at this protest where seven Red Bloc activists, including party leader Grigory Petrenko, were arrested. 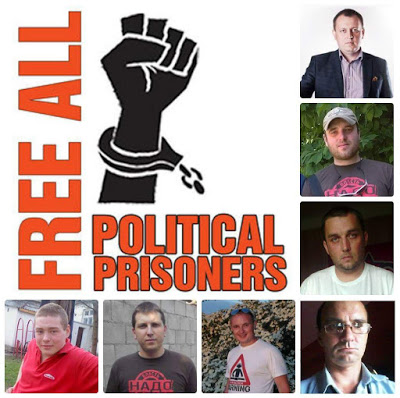 Since that time, the left pole, numerically dominated by the Party of Socialists, has overtaken the pro-Euro-integration forces, playing the leading role in the recent mass demonstrations against the new regime, which as before is dominated by protégés of Vlad Plahotniuc.

The shift in momentum is clearly visible in the words and actions of the pro-Euro-integrationist DA Platform. Shortly after the Petrenko Group’s arrest, supporters of the political prisoners were kept to the outskirts of DA Platform protests, and there were cases of leftists who entered being attacked by fascist elements – similar to the Maidan protests in Ukraine in 2013-2014.

Now, however, the DA Platform has had to adjust its actions in response to mass pressure, and has even joined with the leftists in the Civil Forum coalition calling for unconditional release of the political prisoners, along with early parliamentary elections. (Omega, Feb. 4)

A poll taken after the January protests showed that if parliamentary elections were held soon, the Party of Socialists and Our Party would win a decisive victory, with the DA Platform coming in third. The current governing parties – the so-called Democrats, Liberal Democrats and Liberals – were far down the list.

Next: What is the U.S. planning for Moldova?