Posted on January 20, 2016 by allpowertothesoviets

January 20: Today the world saw images of protesters and police clashing inside the parliament building in Chisinau, capital of this former Soviet republic, located between Ukraine and Romania.

Pro-Western oligarch Vlad Plahotniuc, who has pulled the strings of key government agencies behind the scenes for years, recently assembled a parliamentary majority allowing his Democratic Party to rule openly.

Plahotniuc’s plan was blessed by the United States and NATO member Romania on Monday, during a meeting between notorious U.S. State Department operative Victoria Nuland and President Klaus Iohannis.

Today, January 20, the vote took place; the new Prime Minister Pavel Filip and his cabinet were approved by 57 deputies. Deputies from the Party of Socialists (PSRM) attempted to block the vote; as a result, the majority violated procedure and approved the new government without the required questioning of candidates.

Meanwhile, a mass protest marched on parliament demanding that early parliamentary elections be called. When word of the vote approving the new government reached protesters, they stormed the parliament building. Hundreds of riot police waded into the crowd. After hours of clashes, the protesters seem to have been pushed out.

While protesters occupied the parliament, the majority deputies and the new cabinet were smuggled out a side door dressed as police! A leader of the so-called Liberal Party, part of Plahotniuc’s alliance, was allegedly roughed up by protesters outside. (as reported by moldnews.md)

Who are the protesters?

There are both left (anti-EU, anti-NATO, for friendly relations with Russia) and right (pro-EU, pro unification with Romania, anti-Russia) forces involved in the protests.
When mass protest began in Chisinau last September, they were dominated by the pro-EU “DA coalition,” but the left (the Party of Socialists, headed by Igor Dodon, and Our Party, led by Balti Mayor Renato Usatii) have taken a stronger role recently. The Socialists seem to be the leading force in the actions of recent days, though all opposition groups are participating.
That’s the fundamental difference from what happened in Ukraine two years ago, when the Euromaidan protests were completely dominated by right-wing, pro-Western forces. Which side will win out is a question that is still ahead of us. 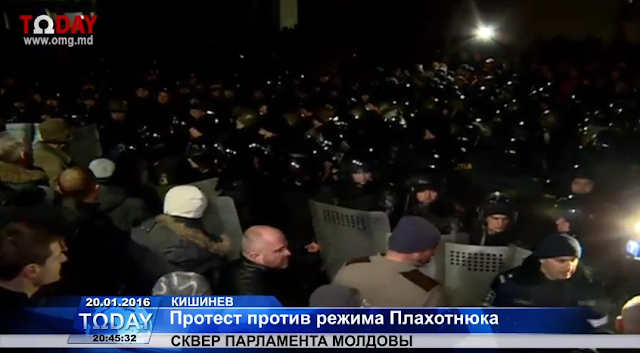 The leadership of the Communist Party (PCRM, headed by Vladimir Voronin), unfortunately, has played a treacherous role throughout, flirting with Plahotniuc and staying aloof from the protests. Some Communist Party deputies actually went over to Plahotniuc’s parliamentary coalition. Of course, many rank-and-file PCRM members are involved in the protests.
The most consistent left political force in Moldova is the Red Bloc – Our Home is Moldova, led by Grigory Petrenko, a former PCRM deputy who was expelled for opposing the party’s drift to the right. It was the Red Bloc’s protests against fuel rate hikes and repression last summer that spurred the protest movement. And it is seven leaders and activists of this party that have been imprisoned for more than four months on orders from Plahotniuc.

The trial of the Petrenko group began this week, and continued today even as the struggle was unfolding in the streets of Chisinau. It is urgent that these comrades be freed to return to leadership of the protest movement, to mobilizing the workers and anti-fascist youth, where they belong.