Poroshenko and a sense of reality (Excerpts)

October 6: One of the main conclusions to be drawn from the meeting of the “Normandy Quartet” last Friday is that each of the parties to the negotiation process on the settlement of the situation in the Donbass has developed its own understanding of the sequence for implementation of the Minsk accords. 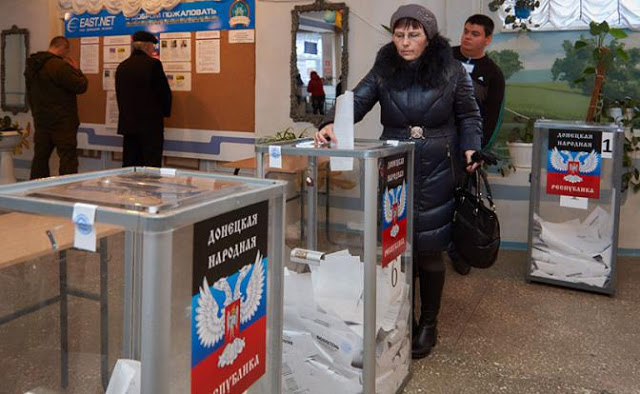 President of Ukraine Petro Poroshenko said that control over the border with Russia must be restored before the end of the year. According to him, Kiev will not make any compromise on the issue of sovereignty over the border.

“As soon as we choose the new Ukrainian authorities, the OSCE, which must now assume control of the uncontrolled area, will pass the control functions to Ukrainian border guards. This process should be completed before the end of the year, before the adoption of amendments to the Constitution. Quite simply, this is written in Minsk, and no one makes any attempt to revise it,” Poroshenko said in an interview on Ukrainian television.

In addition, the Ukrainian president claims that “the withdrawal of foreign troops from Ukrainian territory must occur immediately,” without connection to the timing of local elections, which, according to him, was confirmed by the leaders of France and Germany and told to the authorities of the Russian Federation.

Poroshenko also outlined his vision for local elections in Donbass: “Dialogue must take place exclusively with legally elected representatives of Donbass … They [the existing authorities in the Donetsk and Lugansk People’s Republics] appeared as a result of fake elections…” he said. “But if honest elections are held, if they are well organized according to the criteria of the OSCE/ODIHR, if there is activity of the Ukrainian media and Ukrainian parties, if these elections are recognized by international observers, then they will choose those with whom we will have to rebuild the country,” said Poroshenko.

Recall that on October 2 in Paris, representatives of the “Normandy Four” held talks on the settlement of the situation in the Donbass. The main achievement of the meeting was an agreement providing for the withdrawal of weapons of a caliber less than 100 mm from the contact line by 15 kilometers. …

Victor Shapinov: Poroshenko, like his American patrons, believe that the legislative changes which the Verkhovna Rada voted for under the direction of [U.S. Assistant Secretary of State Victoria] Nuland suffices for implementation of the Minsk agreement. Even though the accords themselves says that changes must be made ​​in agreement with the DNR and LC.

Free Press: How does Poroshenko expect to hold elections before the end of the year, if the parliament has not even discussed the separate law on elections, following the adoption of which there should still be 80 days prior to the vote? What are the general prospects for the adoption of such a law in the Rada? And repeal of the law that declares the DNR and LC “occupied territories,” which is also a condition for holding elections under Ukrainian law? And amendments to the Constitution? What is the probability that what Poroshenko has promised will be endorsed by Ukrainian authorities and society?

VS: Theoretically, the Verkhovna Rada has the authority to change any laws, including the Constitution. At the same time, the actual process of change may stumble upon some difficulties. But, as we have seen, the representatives of the United States can push almost any decision through the Ukrainian parliament. With regard to society, the radicals are now in the minority, the majority want a peaceful settlement and some stability. Poroshenko may try to lean on this silent majority.

FP: Donetsk and Lugansk have already stated that without amnesty they would not hand over the elections. And Kiev stubbornly doesn’t want to implement this point. Is there a way out?

VS: The Minsk process has long been deadlocked. If there is progress on the cessation of hostilities and withdrawal of military equipment, we do not see it in the civil aspect of the implementation of the agreements. Implementation of the Minsk accords is not acceptable to Kiev. However, even if a decision on amnesty is made, I wouldn’t rush to believe official Kiev. It operates according to the famous principle articulated by Filatov (deputy of Kolomoisky): “Promise the scum anything, we’ll hang them later.”

FP: Poroshenko stated that in his understanding, Ukrainian election law requires the participation of Ukrainian mass media and Ukrainian parties. Is this possible in principle? And how does this fit with the vision of Europe, with the “Morel plan”?

VS: No, it’s not compatible with either the Minsk accords or the European vision of the situation. Apparently, Poroshenko is laying the groundwork for further horse-trading. If he insists on this vision, he could lose the support of Germany and France.

FP: According to Poroshenko, at the negotiations in Paris Russian President Vladimir Putin promised to encourage the cancellation of the elections in the DNR and LC. But the West has repeatedly promised to use its influence to make Kiev implement the Minsk agreements, and as they say, we know how that turned out. How effective can such “help” be?

VS: The West is trying to get more concessions from Russia and the republics. Unfortunately, the Western “partners” are often successful.

FP: Let’s imagine that elections were held “under Ukrainian law.” Is the emergence of Ukrainian border guards on Russia’s border with the LC and the DNR possible? After all, it would mean the end of the republics. Will Moscow allow this?

VS: I hope that it will not. It will be a real “drain” of the republics and all who believed in them. Perhaps certain forces in Moscow are interested in such a development; however, Russian authorities may face a loss of internal legitimacy if there is a direct betrayal of the rebels in the Donbass. The people will not fathom such a surrender.