October 8: Lately, from many people I hear a kind of “Yaroslavna’s lament”* about the blurring of the revolutions in Ukraine and Novorossiya. And gentlemen shout about this on both sides of the front.

Here, some cry “occupation,” “betrayal” of the social revolution; on the other side, “treason” to the revolution of “dignity.”

Hearing these cries, I want to ask — was a child born?!

Let’s be honest and admit the truth – there were no revolutions in Ukraine in 2014. There were not! 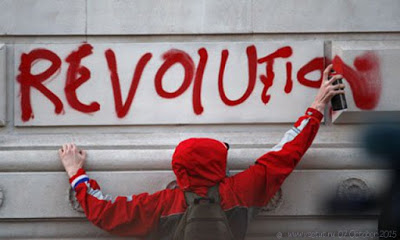 In Kiev, there was a typical, contemptible Nazi coup — when the Nazis put in power some allegedly “pro-Western” oligarchs, instead of other, supposedly “pro-Eastern” ones, and these Nazis were rewarded for meritorious service with a “piece of the pie” and a place at the budget “trough.” No one rebelled against the capitalist regime, or against the oligarchy — primarily because it was the oligarchy which sponsored and led the coup on the Maidan.

In the Donbass, too, there was not a social revolution. Here the people rose up, not against capitalism and the oligarchs, but against Ukrainian Nazism, its violent racism against the Russian and Russian-speaking inhabitants of the former southeast of Ukraine. It was not a revolution — what happened in the land of Novorossiya can safely be classified as a national liberation movement against the cultural and physical violence of those who came to power in Kiev, the Nazis and opportunists hiding behind Nazi slogans.

So, not a revolution, but a banal Nazi coup in Kiev, and, as a reaction to the cultural and physical genocide of the Kiev junta, a national liberation movement in the East. No more, no less.

Whoever says the opposite either was not there, in the thick of things, or was not paying attention to what was happening around them, preferring to project their political fantasies onto the true state of affairs, or engaging in political opportunism unconcerned with what really happened, only about how it is presented to a sponsor or the electorate.

So stop crying crocodile tears and blaming everything and everyone! Accept the truth, and live in the real world, proceeding from actual conditions.

There is a civil war. On one side — Nazis and the people who obediently lay under them. On the other — people of the “Russian world” (in the broadest sense of the word), who came out to defend their culture and their rights.

By and large, people are fighting in Novorossiya, first of all, for the right to live in ordinary Russian culture — to be Russian — and secondly, for the opportunity to be with Russia or part of Russia, and they are the majority.

In the west, they are fighting for their right to impose their culture on the inhabitants of the east, and for the right to become a labor force for Western masters.

Russia and the West have their motives, and they operate based on them — whether cleverly and carefully or arrogantly and stupidly – and in their politics there is no place for altruism.

That’s it — without socialism, revolution and the struggle against the oligarchs …

Too mundane? Perhaps, but the truth is always gray and dull, that’s why dreamers might break with reality and have a nervous breakdown — they can’t tolerate meeting gray reality.

And if you accept the truth, then everything falls into place — war and truce, Syria and the dance with the OSCE and the UN. You just have to be able to accept the truth and get rid of the illusions …

Will Novorossiya win, will there be a “merger,” and what will happen to Ukraine? I do not know!

And nobody knows, even in Washington and Moscow — the future is uncertain. Especially during eras of change, so much depends on us, on our ability to accept the truth, no matter how difficult and unpleasant it may be, and on our ability to quickly adapt to changing situations and to fight! Fight even when everyone and everything is against us, and victory is not apparent. But to believe and to fight! And then victory will be ours.

But there is hope! Based on many features, we can say with confidence – Novorossiya eventually will be! Yes, later than we would like; true, not so easily. But the inexorable gears of history have made a turn, announcing — soon the sun of freedom will shine over Novorossiyan land.

*A reference to the epic poem The Tale of Igor’s Campaign.