On June 1 a Security Force Assistance Brigade (SFAB) of 53 U.S. troops arrived in Colombia, allegedly to support “anti-drug trafficking” efforts. The move, widely seen as preparation for military aggression against neighboring Venezuela, has stirred great controversy among the country’s official opposition parties for bypassing the Congressional approval required for the deployment of foreign troops.

Colombia is not a beachhead or a Yankee aircraft carrier to invade Venezuela.

Hey, Trump, in case you didn’t know, Colombia and Venezuela are two sister nations born from the sword and from the struggle led by the liberator Simón Bolívar. South America is not the backyard of the United States. The Monroe Doctrine and Manifest Destiny are no more than a fantasy, a neocolonial raving of certain rulers of the White House. Respect our freedom and our independence. The self-determination of the South, in unity, is and will continue to be our great dream until its realization. We will be a Great Nation of Sister Republics. This strategic vision of Bolívar has not lost validity, nor has it been defeated; it remains the path of our future. 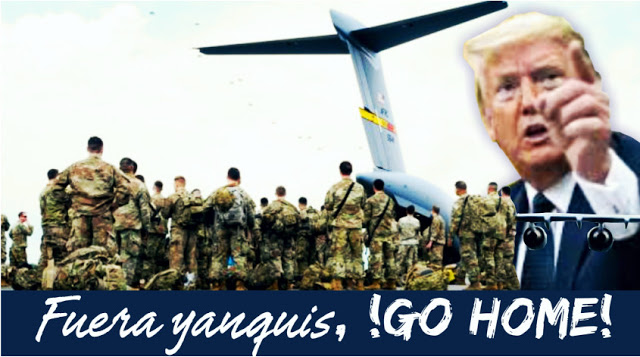 Our independence achieved its first victories in Boyacá and Carabobo with the unity of the armies of Colombia and Venezuela. Bolivar then planted the banner of freedom in Pichincha and Ayacucho, but now with a Latin American army of Venezuelans, Colombians, Ecuadorians, Peruvians, Chileans and Argentines. How right the Liberator was: “United we will be strong and deserve respect; divided and isolated, we will perish.” We will certainly have to go back to those old days. The division watered by Trump with the help of a stateless and Santanderist oligarchy will not be able to disrupt the roadmap written by the Liberator with his bare hands.

The world is changing. The villages are waking up. Capitalism that was born dripping blood everywhere, producing irrational humanitarian cataclysms, has had its veil stripped away much more in the midst of the pandemic that is plaguing the world today. Enough already! It is time for Washington to withdraw its troops from West Asia and abandon the illusion of maintaining its global dominance through force and barbarism.

The people of the United States are already fed up with so much abuse and outrages committed in their name. Nobody can understand how in the midst of this global humanitarian crisis, our Black brothers and sisters continue to be persecuted with the irrationality of outdated and anachronistic racism, and that the right to self-determination of the peoples whose decorum prevents them from kneeling before a decaying empire continues to be trampled on. This is the case with Venezuela, with Cuba, with Iran, and with other peoples. Let them be, it is not a crime to embrace the social order they want to achieve the happiness of their peoples.

Yes, the world is changing: the U.S. military itself turns its back on the irascible Trump’s order to suppress the protests of his own people. In the main European capitals people stand in solidarity with the offended American citizens. Israelis reject the Netanyahu government’s claim to annex the West Bank from the occupied Palestinian territory. If you look directly into the eyes of common sense, there is no rational explanation that validates an attack on Sister Venezuela through servile leaders such as Iván Duque, president of Colombia. Colombian soldiers, aware that the Havana peace agreement was betrayed, do not want a war waged by the United States against Venezuela; they want peace, a dignified life, diplomatic solutions and respectful relations with neighboring countries. 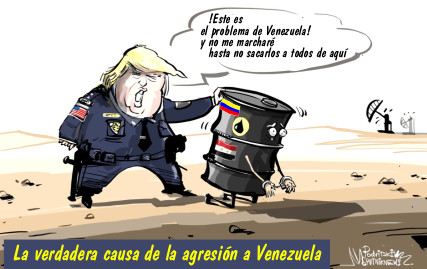 All Colombians, the social and political movement, must ask the U.S. soldiers, who have been sent to our country under the bald pretext of the war on drugs, not to lend themselves to a war of aggression against Venezuela, to declare themselves in disobedience to their comrades-in-arms, and demand their return to the northern country.

Let us convert this historical crossroads into a time of global solidarity. Solidarity of the peoples of the world with Venezuela, attacked, abused and robbed by Donald Trump. Solidarity with Fidel’s Cuba, which, despite being handcuffed by an inhuman blockade, continues to spread its solidarity among the suffering and the poor of the earth in times of uncertainty and catastrophe. At the same time, since it is proven that the Iranians do not give up, then respect their culture and their world view. The Persians are also a peace-loving people.

The struggle for humanity has to succeed. The world must go down many paths of solidarity and brotherhood, in order to seek a solution to the world crisis. A new social order, a world of justice, respect, cooperation and brotherhood, is possible. We will all have — if we unite — a new opportunity on earth. The unity of peoples is the hope of a new dawn.

6 thoughts on “Colombia: Yankees get out! Go home!”