Posted on April 12, 2020 by allpowertothesoviets

April 14, 2020, marks the sixth anniversary of Ukraine’s war against the people of the Donbass mining region. The war began after the people of this multinational, mostly working-class region of eastern Ukraine rejected the U.S.-supported, far-right coup that overthrew the country’s elected government in February 2014. After Ukraine began its murderous assault, the people of Donbass voted for independence and formed the Donetsk and Lugansk People’s Republics. According to the United Nations, more than 13,000 people have been killed in Ukraine’s war, including over 3,500 civilians.

On April 14, 2020, join people all over the world to demand #StopWarOnDonbass. Take a photo with a sign calling for an end to the war and blockade of Donetsk and Lugansk. (You can print out a sign here or make your own!) Post on social media with the hashtag #StopWarOnDonbass and #FightCovid19NotDonbass. Send a copy of your photo to .

Sample text:
April 14 marks six years since Ukraine’s illegal war on the people of Donbass began with U.S. assistance. More than 13,000 people have been killed. These war crimes must end! I demand an immediate end to U.S. financial, political and military aid to the Ukrainian government and its allied far-right groups. End the bombing and blockade of the Donbass region immediately. Recognize the Donetsk and Lugansk People’s Republics and adhere to the Minsk agreements.

The largest battles ended in 2015, but the war has never ended. The Ukrainian Armed Forces and neo-Nazi “volunteer batallions” continue to routinely violate peace agreements, encroach on the borders of the DPR and LPR, and target civilian homes and infrastructure, wounding and killing innocents.

In recent weeks, as the world has struggled against the threat of the Covid-19 (coronavirus) pandemic, Ukraine has escalated the war once again. While the people of Ukraine suffer from austerity and the destruction of the country’s health care system, President Vladimir Zelensky continues the war in defiance of the international Minsk agreements and UN Secretary General António Guterres’ call to end military conflicts in order to combat the virus that threatens all countries.

With assistance from Washington and NATO, Ukraine carried out its first murder-by-drone on April 9, 2020, killing a 25-year-old civilian woman, Miroslava Vorontsova, in the town of Gorlovka. An elderly resident was wounded in the same attack.

The alliance of pro-Western politicians, right-wing oligarchs and fascist gangs that seized power in Kiev in 2014 received massive aid and support from the U.S. administration of Democratic President Barack Obama and Congress led by Republican Senator John McCain. The presumptive Democratic presidential nominee, former Vice President Joe Biden, served as the unofficial colonial governor of Ukraine from 2014-2016, presiding over many atrocities against the people of Donbass and Ukraine, including the cold-blooded murder of more than 40 antifascists at the Odessa House of Trade Unions on May 6, 2014. The far-right Donald Trump government has continued to prop up and aid the Ukrainian regime and its war against the people of Donbass.

This initiative is part of the international day of action called by the Communist Party of the Donetsk People’s Republic:
http://wpered.su/2020/02/19/obrashhenie-kompartii-dnr-ko-vsem-bratskim-partiyam-i-organizaciyam-v-svyazi-s-neprekrashhayushhimisya-boevymi-dejstviyami-na-donbasse-2/ 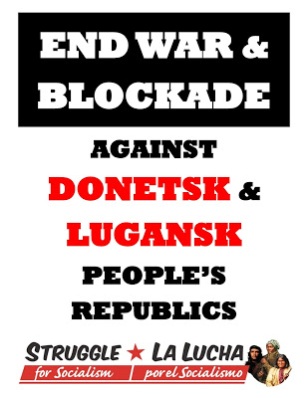