February 12: Sergei Shargunov, a deputy of the State Duma from the Communist Party of the Russian Federation (KPRF) faction, appealed to the prosecutor of the Arkhangelsk region and the head of the Ministry of Internal Affairs of Russia for the Arkhangelsk region with a request not to deport Benes Ayo to Ukraine and provide him with asylum in the territory of the Russian Federation. 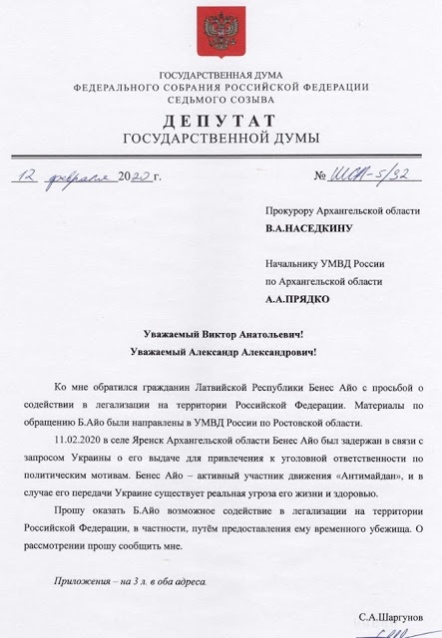 “Benes Ayo is an active participant in the Anti-Maidan movement, and if transferred to Ukraine, there is a real threat to his life and health.

“I ask that B. Ayo be provided all possible assistance in legalization in the territory of the Russian Federation, in particular, by granting him temporary asylum,” reads the letter, the text of which the deputy published on his Facebook page.
Source
Translated by Greg Butterfield