Defeating the media campaigns orchestrated inside and outside of his country by neoliberalism’s firefighters, the popular leader Evo Morales Ayma won the electoral contest for the Presidency of the Plurinational State of Bolivia in the first round. 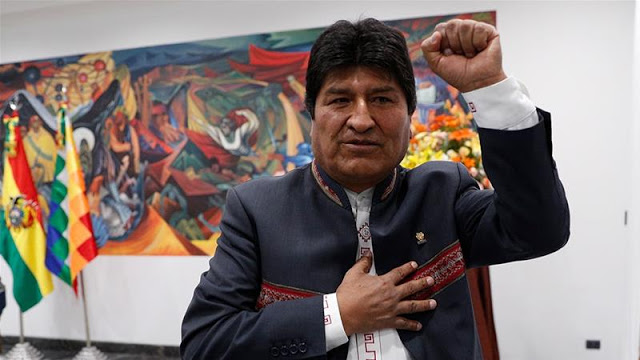 This triumph comes at a time when the peoples of Latin America and the Caribbean are boiling in protest against the anti-social economic measures of various leaders pledged to represent Washington’s interests. So this is a victory not only for the most humble Bolivians, but for the peoples of the continent that are fighting day by day for good living, Sumak Kawsay, and definitive independence.

The Revolutionary Armed Forces of Colombia-People’s Army (FARC-EP) welcomes President Evo’s triumph in the general elections, and congratulates the Movement Toward Socialism party, its supporters and the people of the commune who will continue to benefit from the policies of social justice, dignifying the human condition, driven by the son of Orinoca.

With the left hand tied behind his back, the hardened Aymara has for the fourth consecutive time struck a blow of dignity against the continental right, obtaining 46.86 percent of the votes; 10 points more than his opponent Carlos Mesa, a clear success that could not be obscured by the ignorant maneuvers, echoing the United States, made by tyrants like Iván Duque from Colombia, when they express “concern” for Bolivian democracy while their own countries burn with popular disagreement.

From the insurgent mountains of Colombia, FARC-EP
October 22, 2019 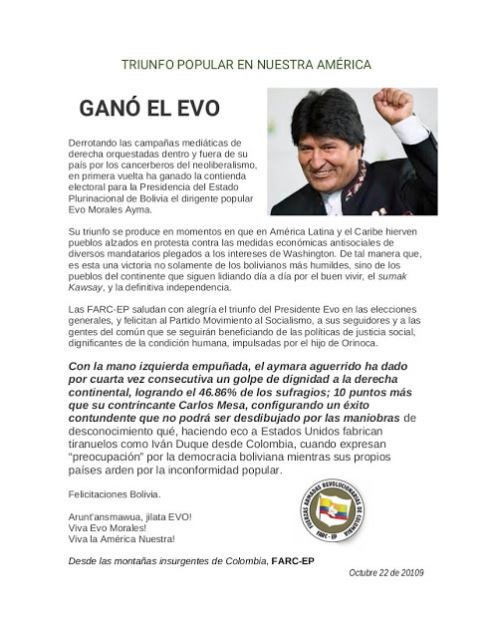