Posted on July 3, 2018 by allpowertothesoviets

Translator’s note: In late June and early July, protests swept Russia in opposition to a so-called pension reform plan announced by Prime Minister Dmitry Medvedev. In several steps, the Russian government’s plan would raise the retirement age for women to 63 by 2034 and for men to 65 by 2028. Many of the protests have also opposed hiking the VAT (Value Added Tax, a regressive tax similar to sales tax in the U.S.) and gasoline prices.

Under the 1932 Soviet constitution, the retirement age was set at 55 for women and 60 for men. For the last quarter century, since the counter-revolution in Russia, the ruling capitalist oligarchy has been too afraid to touch this crucial right won by the workers.

Protests have been forbidden for the duration of the World Cup in Moscow, St. Petersburg and other cities hosting the games. Therefore most of the actions have so far taken place in regional capitals and smaller cities.

Collected here are reports of several protests published by the United Communist Party of Russia (OKP).

More than 200 people took part in a protest rally on June 30 against the plans of the Putin-Medvedev government to raise the retirement age.

The action was initiated by the ROT FRONT and was held with the support of the United Communist Party, the Left Bloc, the MPRA trade unions, teachers, students, soldiers, the Yabloko party, and many concerned citizens.

The protesters went out to the central square of the city with slogans: “No to predatory pension reform,” “No to pension adventure,” “Hands off the gains of the working people,” “Pension reform: will you rest only when you’re dead?”

The police and employees of the district administration who were present at the action reacted nervously to the slogans, twice demanding to remove the posters against raising the retirement age. After the rally was over, an attempt was made to rewrite the passport data of people holding placards in their hands.

Afterward, a meeting was held in Kirovsk with the secretary of the Leningrad regional committee of the OKP, Kirill Vasiliev, and OKP member and ex-deputy of the St. Petersburg parliament Irina Komolova. Vasiliev suggested in response to the anti-social pension reform to launch a campaign for the introduction of a progressive scale of income taxation. And Irina Komolova urged residents of the country to exert pressure not only on Duma members, but also deputies of regional parliaments, so that they give a negative response to the legislative initiative of the government.

During the action, the organizers played four audio recordings from 2005, when President Putin stated that he did not support raising the retirement age.

“No to pension reform! Retire the government!” — with such demands at least 500 residents of Miass came to the rally on July 1.

The organizers were the United Communist Party, the Interregional Association of Communists, the City Women’s Council “Hope of Russia”, the City Council of Veterans and the Public Council of the Miass Municipal District. Also, the association of trade unions of the city was invited to the event.

The meeting was stormy, sometimes even very stormy.

In the capital of the South Urals, the rally against raising the retirement age gathered more than 2,000 people.

The action was joined by ordinary citizens, political parties (including OKP), public organizations (in particular, the STOP GOK movement, which gained wide popularity).

The townspeople felt that it is impossible to raise the retirement age and expressed indignation with the plans of the government, presenting a personal account to Putin and Medvedev.

Together with the pensioners at the rally, the painful problem of construction of the Tominsky GOK [a copper plant that threats enormous environmental destruction] was discussed. Citizens urged the authorities to resolve the issue of improving the environment.

Single pickets against raising the retirement age, as well as against rising gasoline prices and VAT rates, were organized on July 1 in Ivanteyevka by comrades from the Moscow regional department of the OKP.

The topics raised by the Communists found a lively response among the townspeople: the Ivanites in a quarter of an hour distributed all the leaflets. The citizens responded with indignation to the pension reform plan of the powers that be. It can be seen that the praised rating of one well-known politician is bursting at the seams.

Rallies dedicated to protesting the so-called pension reform, the next robbery of citizens by the government under the pretext of raising the retirement age, took place in Yakutsk on July 1 and 2.

“This is not a pension reform, it is a pension robbery.The average pension in our republic is 20,000 rubles. This figure is multiplied by 12 months, this is less than 250,000 a year. Multiply this number by 8 years for women and 5 years for men — they want to raise the retirement age, on average it turns out that thanks to this “reform,” they will steal from women on average 2 million rubles, while from men they will steal 1.25 million rubles,” said Alexei Kasatkin, one of the participants of the rally on July 1.

This is an election year in Yakutsk — there are elections for the head of the republic, parliament and city duma. And those politicians and parties who want to take away pension rights from the people should not count on votes!

If we unite, we will win!

Here, the first mass rally under slogans of protest against raising the retirement age in Russia took place on Sunday, July 1. According to organizers’ estimates, more than 300 protesters, mostly young and middle-aged people, came to the action in “Hyde Park” in Dzerzhinsky Square.

The participants expressed their dissatisfaction with appropriate posters: “Thank you to Putin for the fact that I will not live to see the beggarly pension!”, “All Russia is against raising the retirement age!”, “Pension reform means the death of Russians!”, “We can repeat 1917”, “Under Putin only prices, taxes and retirement age grow.” 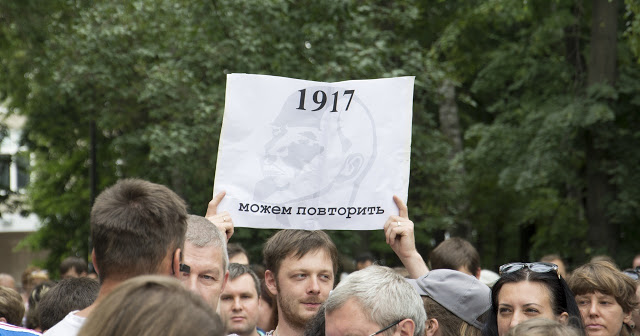 The rally was held in the “open mic” format, which allowed different people to express themselves: schoolchildren, students, teachers, public figures, and even guests from Saransk, where during the World Cup it is forbidden to express their negative attitude to pension reform.

The meeting was also attended by members of the OKP — comrades Mikhail Yakhkind and leader of the youth organization “Generation of New Time” (PNV) Ivan Finogeev.

At the end, protesters adopted a resolution demanding that the authorities prevent an increase in the retirement age and start a broad discussion on a set of economic measures to raise the living standard of the population and solve the problem of filling the pension fund without raising the retirement age. The text of the resolution also included demands for the removal of [Prime Minister] D.A. Medvedev from his position and for the government of the Russian Federation to resign, as well as impeachment of President V.V. Putin, without whose consent the proposed pension reform could not be announced. The last two demands were met by a flurry of applause from the protesters.

After the rally, police detained Vladimir Rechkalov, press secretary of the PNV, who was preparing a video report about the ongoing action. The police specifically waited for the moment when the bulk of the protesters had dispersed, so as not to create an uproar.
Ivanovo
A small but militant picket against the plans of the authorities to raise the age of retirement was held on June 28 in the Motherland of the first Soviet — the city of Ivanovo. Activists of the United Communist Party took part in the picket.
Komsomolsk-on-Amur, Khabarovsk Krai (Russian Far East)

More than 1,500 people – an unprecedented number of protesters for this city in recent times – gathered July 1 to rally against raising the retirement, VAT and gasoline prices.

The rally was organized by an initiative group of residents, mostly supporters of socialism, and in the end turned out to be quite left-wing.