Posted on March 28, 2018 by allpowertothesoviets

The spontaneous rally of Kemerovo residents, dedicated to the tragedy in the “Winter Cherry” shopping center, lasted more than 11 hours. Kemerovo residents expressed distrust of the authorities and demanded the resignation of the city and regional leadership.

The rally was held on Soviet Square in front of the regional administration building. It started at 9:00 local time. A live webcast was available on the Internet. People began to disperse only around 20:00 local time. According to the press, many Kemerovo residents went through the city center to the burnt down shopping center to honor the memory of those killed in the fire there. The police did not interfere with the townspeople.

The mood of general confusion among residents is exacerbated by conflicting information about the number of victims. According to the most recent data, 64 people were killed, another 52 people were injured. The investigation received allegations of 67 missing people. Relatives reported 85 missing persons. Information on “hundreds of corpses” has been spread on social media. Official media said that these rumors were spread by Ukrainian secret services and Internet hooligans. In particular, the Ukrainian pranker Evgeny Volnov was blamed. As far as the truth of the statement of the Kremlin propagandists is concerned, it is impossible to know. Ordinary citizens have every reason to distrust both the overseas well-wishers and their “own” authorities, which have long been accustomed to covering all their dirty deeds with references to the “external threat.”

At the rally, hard assessments were made of the current authorities. “What’s the difference how many died? Even one child is a tragedy. If we do not change anything, more people will die!” concluded one of the speakers. The participants demanded to name the exact number of the dead and explain why the relatives of the victims are required to sign a non-disclosure order. “When caring for the future of children is a priority, when you see the suffering of children, then you cannot shift your papers quietly,” said one woman to the officials. A naive conviction in the possibility to appeal to the good intentions of officials was coupled with the belief in the “good king” who will fix everything and punish the wrongdoers. Many demanded Putin and wondered why he did not come out to his citizens, and only limited himself to calling on people not to believe social media reports.

Instead of Putin, First Vice-Governor Vladimir Chernov and Vice-Governor Sergei Tsivilev, newly appointed to this post, went out to the protesters. According to journalists, Tsivilev knelt down and asked forgiveness from those “who got into this difficult situation.” The protesters were not satisfied with this and demanded the resignation of the city Mayor Ilya Sereduk and the governor of the Kemerovo region, Aman Tuleyev. Just resign … 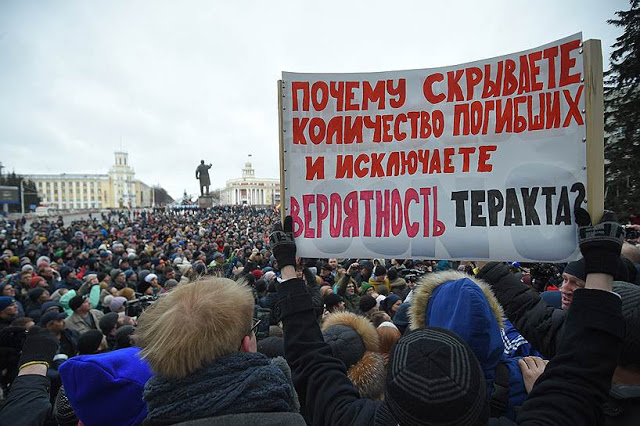 One of the residents of Kemerovo wrote on social media:

My family’s gone. I blame the ruling regime in my country. Every official dreams to steal like Putin. Every civil servant treats people like dirt (just like his superior treats him and all who are below). They will appoint a scapegoat and close the subject, and the dangers (negligence, total corruption, soldering and degradation of the population) will not go anywhere! Putin will personally punish all (with his signature): a decree to check all the shopping centers — and after all that we still have many other establishments there are just dilapidated, houses, old hospitals. Tragedies can happen anywhere!

The fire in the shopping center in Kemerovo occurred on March 25. 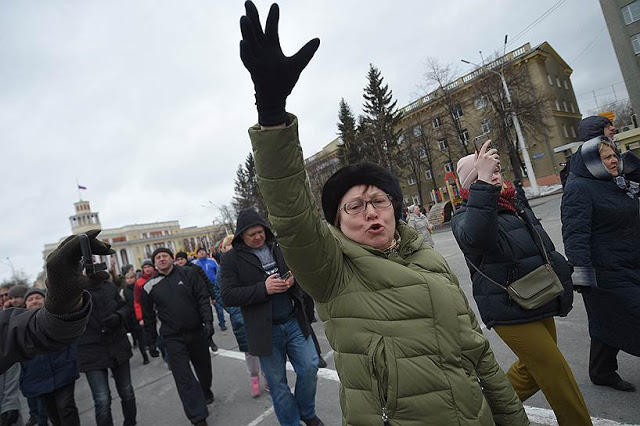