Together we will win!

Most of us heard this ardent appeal from the lips of the fiery fighter for socialism Victor Anpilov in 1991.

Yesterday he suddenly passed away in his 73rd year. He died of a stroke.

Victor Ivanovich Anpilov was a member of the Movement of the Communist Initiative, who spoke out against Gorbachev and Gorbachevism in the CPSU, one of the founders of the Russian Communist Workers’ Party and the Labor Russia movement. It is with this movement that his name is associated by the majority of citizens of modern Russia. 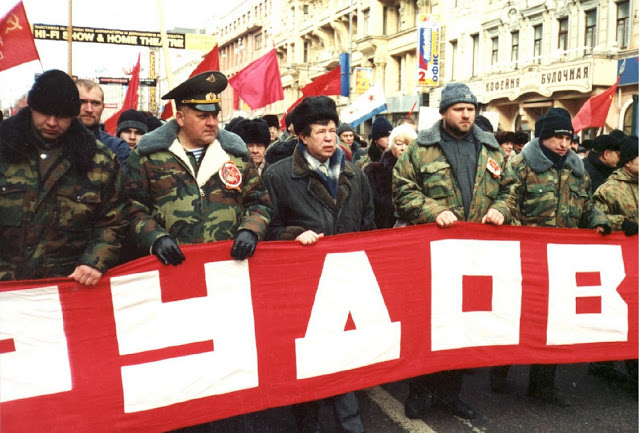 During the Soviet era, Victor Ivanovich was a prominent international journalist, fluent in Spanish, who worked for a long time as a correspondent in Nicaragua. He studied the experience of the Cuban Revolution and the national liberation struggle of the peoples of Latin America, Simon Bolivar and Ernesto Che Guevara. It was from here that he articulated his understanding and love for the revolution, which he carried through his whole life.

It was Anpilov who published the first communist, anti-Gorbachev newspaper, Molniya, which confronted the Secretary General on May 1, 1990, on Red Square. After the counter-revolutionary coup of 1991, Anpilov actively fought against capitalist restoration in Russia, against the collapse of the Soviet Union. A fiery orator, he raised to struggle and brought into the streets of Moscow dozens, sometimes hundreds of thousands of protesting workers. Anpilov passed much of the way in the ranks of the RKRP, although his convictions are difficult to call scientific, rather he had a revolutionary spirit.

Victor Ivanovich took an active part in the events of Black October 1993, on the side of the defenders of the Soviet Constitution. He was arrested and tortured.

In 1995, as part of the bloc of parties (RKRP, PKK and RKP-CPSU) he was included in the top three leaders of the electoral bloc “Communists – Labor Russia – For the Soviet Union.” Only due to harsh pressure and the dirty games of the authorities, the bloc was not allowed to overcome the 5-percent barrier, having missed the results of the calculation by half a percent.

Until the end of his life VI Anpilov remained the ideological leader of the Labor Russia movement, an indomitable fighter for freedom and socialist ideals in his, often semi-romantic, understanding.

The memory of this indomitable fighter, the most active participant in the communist resistance movement, Victor Ivanovich Anpilov, will be preserved in the history of the communist movement of Russia and in our hearts. From the example of our struggle and our mistakes, young revolutionaries will learn, not only in Russia.

We express our deep condolences to the relatives and friends of the deceased, his comrades in the Labor Russia movement, and the veterans of the movement, with whom he passed the most difficult years of counter-revolution.