Posted on October 19, 2017 by allpowertothesoviets

A series of reports from Sochi, Russia, by organizers and participants of the XIX World Festival of Youth and Students, reflecting on the interference of Russian capitalist authorities in the festival.

Bulletin: About an hour ago the entire delegation of Greece was detained at checkpoint 2 of #WFYS2017, as well as comrades from the RKSMb. The reason is “seditious” (anti-capitalist) posters. The Greeks are very angry and do not want to leave until they are returned. The policemen talk about summoning OMON [riot police].

In the end, it was stated that – get this! – “The posters are too big” and they must be cut to pass through! This is either a sophisticated mockery, or a triumph of stupidity.

Cherry on the cake: my credentials for #WFYS2017 are blocked.

Update: The Greeks called the embassy. The issue will be decided at the governmental level. They do not intend to cut the posters.

Update: I managed to talk to the security staff. After a while, comrades from Greece reported that the problem had been resolved. I do not know the details, because I’m back behind the fence.

Bulletin: The flag of Venezuela is forbidden! The national delegation intended to take it to an event called the anti-imperialist court. Forbidden! 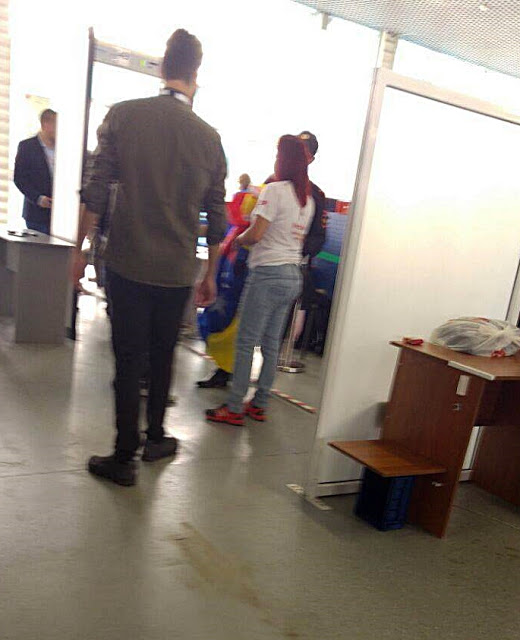 Bulletin: In the foreground of this photo is a member of the Central Committee of the Communist Party of Lebanon, Ahmed Dager. He has been waiting for two hours (!) to be noticed and accredited. But there is no one at the “problem” accreditation desk (N 40). And no one knows when someone will come This is the attitude towards the Communists. 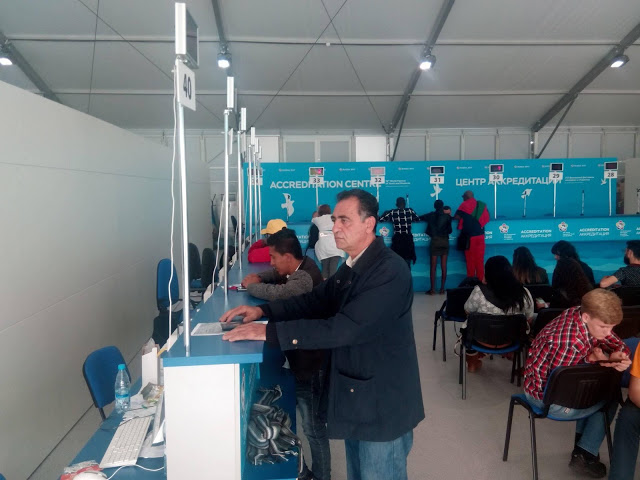 And I, comrades, am again blocked by the real organizers of the Festival — the government of the Russian Federation.

Update: The Lebanese guest was told that he had a “refusal from the Security Council.”

The situation with my accreditation at #WFYS2017 is becoming clear. Last night, it was recalled by the Roskongress Foundation. There is even the name of the employee who did it.

In such a simple way, the Russian authorities took revenge for the fact that I did not hide the truth about what was happening at the festival.

It looks very stupid. To hide the truth about #WFYS2017, they would need to remove all delegates from WFDY, and for better reliability — all participants. Let only officials and their lackeys stay. They will sit in luxurious rooms watching television and tell each other how wonderful everything is. It’s the only way.

Photos from the World Summit and today at the Accreditation Center. 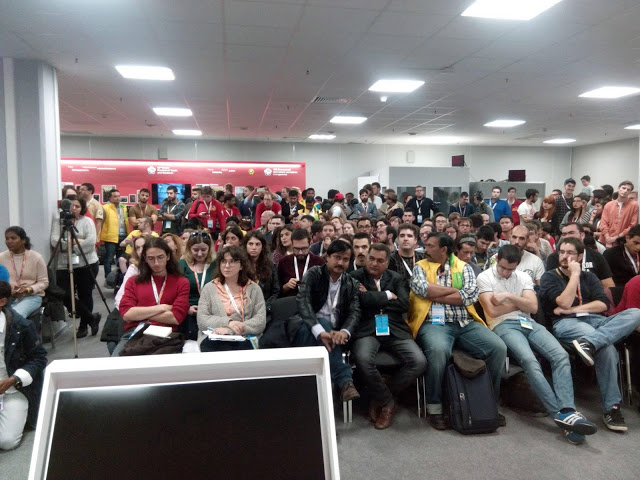 Right now at #WFYS2017 there is a conference of Communist youth organizations of the world. The hall is full. Officials are worried, but it seems it was explained to them that such a meeting is normal at the festival. 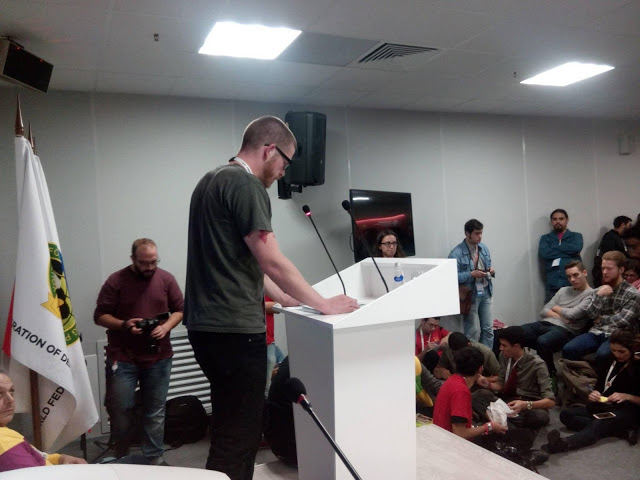 The comrades asked me to represent the RKRP and the RKSM(b) on the presidium of the meeting.

I managed to get a feedback from quite competent and high-ranking Russian officials about some incidents that occurred at #WFYS2017 . For the sake of objectivity I quote these explanations. How much they correspond to reality, I do not know.

1) Incident with the delegation of Western Sahara.

According to Russian representatives, the delegates of Western Sahara did not coordinate their arrival with anyone, had no visas and invitations. They just boarded a plane and flew to Russia. Their no one waited, so they unfolded.

2) Incident with a comrade from the Komsomol of Serbia.

Milan Petkovic, apparently, was on some kind of “black list,” where people who somehow violated the order of crossing the border are being entered. Such lists are maintained by each state. Since there is a visa-free regime between Serbia and Russia, the Russian Federation could not prevent his intentions to come to Russia. But as soon as he arrived, according to the instructions, he was immediately deported.

I repeat, all of the above is a retransmission from Russian officials, with which I have nothing to do. I will refrain from assessing the adequacy of these actions.