Posted on August 17, 2017 by allpowertothesoviets

The coming to power of Trump and the strengthening of the right-wing camp in the U.S. led to an upsurge of American ultra-right groups. White racists, neo-Nazis, anti-Semites and neo-fascists of all kinds, including the newfangled “alt-right” with whom Trump was flirting, grew stronger. The ideologist of this trend, Steve Bannon, was appointed to a high post in the administration of the American president.

The reforms proposed by the right-wing Republicans — cutting back on social spending, dismantling of “Obamacare,” a sharp increase in the military budget, and continuing attacks on the civil and political rights of workers, women, labor, migrants and minorities — provoked the opposition of millions, and protests swept across the country.

Although Trump’s opponents from the liberal Democratic camp tried to take full control over the protests, the protests went beyond the limited political agenda of the Democratic Party. Attempts by the right to counter the mass actions of left radicals and liberals looked pitiful and unconvincing. On one side of the barricades millions gathered, on the other — hundreds and thousands. In clashes between the neo-fascists and left-wing radicals, those in the street were behind the latter. 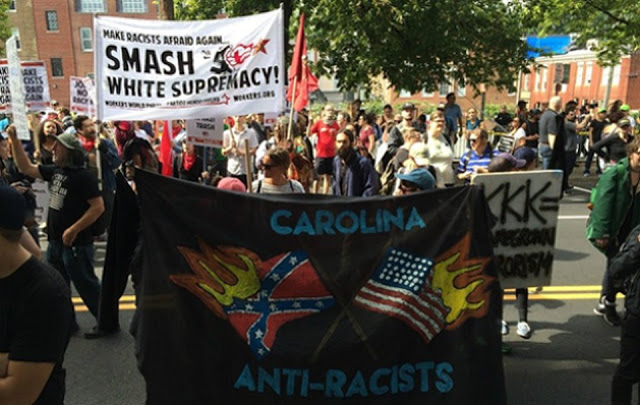 However, in the course of the confrontation, the left was increasingly criticized by the liberal mainstream media, which, expressing the point of view of the liberal bourgeoisie, began to equate the actions of the left-wing radicals with the ultra-right. Some writers reached the opinion that they considered the socialists more dangerous than the fascists.

The fact that neo-fascist fanatics were going to hold another rally in the city of Charlottesville was known long before the clashes. The formal reason for this was the decision of the local authorities to move the monument to the slaveholders’ General Robert Lee, who even before the Civil War in the United States led a punitive operation against the abolitionist leader John Brown.

The fascist torchlight procession and the influx of armed racists were meant to intimidate local authorities and counter-demonstrators — but this did not happen. Massive clashes between left-wing radicals and their neo-fascist opponents took place in the streets of the city. The fanatic fascist James Fields deliberately drove into a crowd of leftists, killing a member of the Industrial Workers of the World, Heather Heyer, and injuring about 20 people.

This attack is a typical terrorist act, borrowed from the arsenal of the “Islamic State.” However, President Trump, whose father himself was a member of the Ku Klux Klan, gave hypocritical condolences to the victims and laid the blame for the incident on both sides. This statement is a perfect testimony of how the American bourgeoisie perceives the situation in the country. It is not capable of rebuffing fascist groups, it is afraid of any popular upsurge, it compares the socialists to the Nazis — and its affection is obviously on the side of the latter.

The events that Ukraine has experienced since the Euromaidan show how important the political and street struggle for historical memory is today. Symbols in the form of monuments are used there to promote right-wing ideology in public space. The authorities set up monuments to the most odious figures: Stepan Bandera, SS Galichina soldiers, and in the town of Vinnitsa, a monument to Simon Petlyura, who was killed by anarchist Shalom Shvartsbard in retaliation for Jewish pogroms committed by his atamans, will soon appear. Against the backdrop of the destruction of the monuments of Lenin, Marx, Engels, participants in the revolutions of 1905 and 1917, workers’ activists, communists, socialists and anarchists, the country massively erects memorial plaques to ultra-right politicians and militants, calling them “decommunized” streets.

The appearance of such monuments and street names is an outrage to many Ukrainians, but the right-wing regime imposes them on society by force. Thus, despite the fact that more than 10,000 residents of Kiev signed a petition against renaming the avenue in honor of Soviet war hero General Vatutin, the authorities simply ignored their position. The avenue will be renamed in honor of the Hitlerite army officer and organizer of punitive police actions Roman Shukhevych. A peaceful picket against this renaming was brutally dispersed by ultra-right militants — with the open protection of the regime, which simultaneously carries out unprecedented anti-people reforms imposed on Ukraine with U.S. assistance.

It is not surprising that the Ukrainian Nazis actively support the American ultra-rightists, who defend the symbols of the slave-owning Confederacy. Moreover, they were delighted to receive news of the murder of an anti-fascist activist in Charlottesville. In general, we can say that the American ultra-right is copying the actions of its Ukrainian counterparts during the Euromaidan. They use the same symbolism, the same tactics of street violence with the use of various weapons, the same form of torchlight processions, which goes directly back to the tradition of Hitler’s storm troopers. 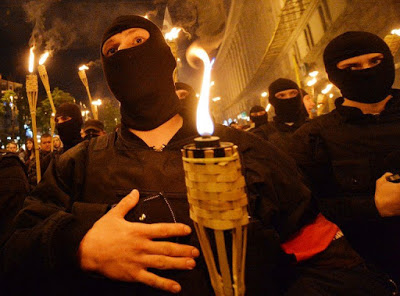 The Ukrainian experience shows how dangerous such movements become if they are not met with a timely rebuff from progressive socialist movements and are allowed to forcefully impose on society the dominance of their ideology and their heroes.

We, the communists of Ukraine and Russia, welcome the active struggle against the shameful racist heritage in the United States. We express our solidarity with the communist and workers’ organizations of the United States, which are now at the forefront of the anti-fascist resistance, and to all who fight against the rule of finance capital and all forms of exploitation of man by man.