Below, we publish a message from Nemo, commander of INTERUNIT (team of internationalist fighters) in Donbass.

In Donbass there is no peace, nor is there war in the classic sense of the term, but a frozen situation that continues to claim victims, civilian and military, on both sides of the front.

For me, the war fought with weapons has been over for months, with only the matter of obtaining documents with which to return home. I’m in a Prizrak (Ghost Brigade) facility in the rear, where soldiers go to rest during furloughs. A very boring place. Fortunately, every now and then there also come comrades with whom you can have a good time. Towards the middle of April Tyson arrived, who had taken two weeks off to recover from the hardships of war. He was a true communist, a critic of the current communist parties, considered himself “Soviet.” He was good and very positive. He had the physique of a boxer, a sport he loved. He wore only uniforms of the war in Afghanistan, he had them all, summer and winter. On his cap, in addition to the red star with hammer and sickle, he had the lapel pin of the Communist Youth of the Soviet Union. I was very happy to be with him, he was a true friend. Besides, he spoke some English, with which to supplement the shortcomings of my Russian, so the comparison could be more thorough. We were politically in tune, saw things similarly. We also agreed that the war had taken a senseless turn, that if an order to advance on a large scale was not given, it is possible for the situation to remain in a state of tension for decades which, however, still causes the death of many people. This prospect seemed senseless to him, but he was ready to go on in the fight, anything to not return even one centimeter of land to the fascists. 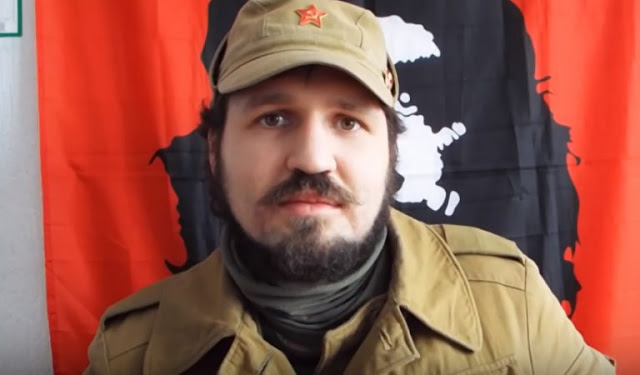 One day while we ate, I told him that in a few days the Antifascist Caravan would arrive, and I explained the project. He was startled, he thought that I was making fun of him, he could not believe that in this remote place he could meet one of his favorite bands. He loved Banda Bassotti, and he never thought that he could meet them here. His leave would be finished on April 30, exactly on the day when the caravan was scheduled to arrive, and things seemed to be working out for the best. Unfortunately, on April 29 he was recalled urgently into service, as we had suffered an attack in which five comrades had died and he had to participate in the replacement of the victims. He was very sorry for not being able to attend the rally, we consoled ourselves by promising to go together to see a Banda Bassotti concert, whether in Donbass, or Moscow, or Rome, when I would meet him after the end of the war. He returned to the front, we said a “goodbye” and not a “farewell”, I promised him that before leaving I would come to see him.

On May 7 we suffered a heavy attack, with several losses. Tyson was one of them. I won’t see him again. The promises I made to him will end up in the heap of those that can’t be kept due to death; these promises are many, more and more. Whenever a comrade dies it is a very hard blow, but when this is also a friend, the pain is unbearable.

He agreed with my choice to continue the fight only on the political level, at least until the day when there will be large-scale offensive, so I will not change my plan, indeed I will strengthen it for him and all the other fallen comrades.

Tyson and the others died for a better world, a socialist world, now it’s up to us to build it. This is the best way to honor their memory.

Now our fists are raised to the sky to greet you, but then will return to strike our enemies.