Fascism shall not pass!

In Moscow, an action was held against the procession of SS Legionnaires in Riga, Latvia, on March 16.

Here we see a situation where it would seem that some Latvian officials and the prime minister are opposed to the procession of SS Legionnaires and young neo-Nazis in Riga, but they do not hinder it. From somewhere there are funds to bring elderly people from across all the Baltic States who were part of the Latvian Legion of the Waffen-SS.

The Russian authorities are no better; they are hypocrites who only mimic anti-fascism when it suits them. They don’t want to offend their partners from Ukraine and Latvia, and so they close their eyes to what is happening there. 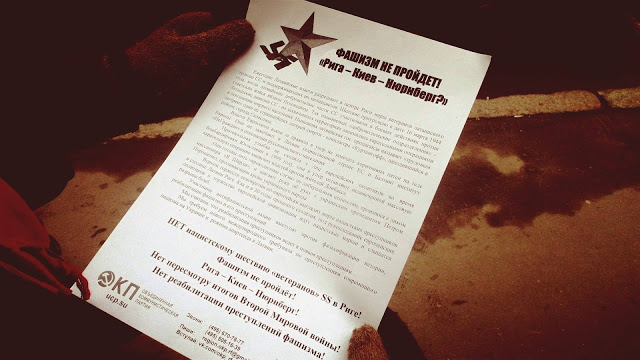 As a result, this anti-fascist action, which had been planned as a mass picket, was banned by Moscow officials. By such actions they actually show solidarity with the Nazi ghouls marching in Riga.

Despite the obstruction of the authorities, activists of the Communist Youth Union (SCM), United Communist Party (OKP) and Committee 27 for the Kharkov People’s Republic (Комитет 27 ХНР) conducted a series of single pickets in front of the Latvian Embassy in Moscow.