Dontesk, March 5: The Red Joan of Arc of Donbass 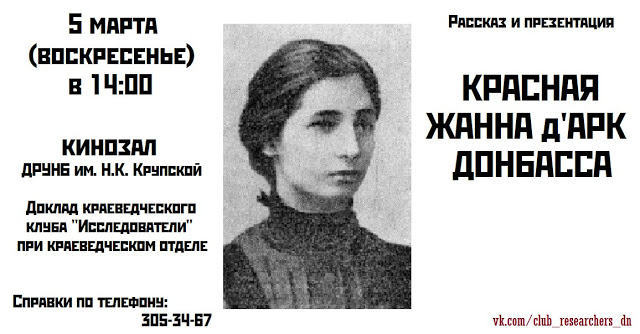 The next meeting of the “Researchers” local history club will coincide with the International Day of Women’s Solidarity – March 8.
Continuing the story of the formation of the Red Guards and the Red Army in Donbass, we will talk about one of the most unique Reds — Lyudmila Georgievna Mokievsky-Clove – the only female commander of an armored train during the Civil War, whom the people called the “Red Joan of Arc of Donbass.”

The Local History Department invites all people interested in the history of their native land to attend meetings of our club. Admission is free.

The meeting will be held on March 5 at 14:00 in the cinema hall of the library.

March 8 is the day of solidarity and struggle for women’s rights. We’ll talk with women of Donetsk who continue the struggle in the face of war and economic blockade. Meet at the “Sukharevskaya” Metro station at 16:40. Program begins at 17:00.