Posted on February 6, 2017 by allpowertothesoviets

In late January and early February, Donetsk and Lugansk faced their worst wartime conditions in nearly two years, as the U.S.-backed Ukrainian government of President Petro Poroshenko escalated terror-bombing of homes, schools, hospitals, and essential services in the capital city of Donetsk and all along the front line.

At the same time, contradictory statements and belligerent actions by the Donald Trump administration in Washington have undermined lingering hopes in Donetsk, Lugansk and neighboring Russia for a significant change in the U.S. posture towards Ukraine that could lead to a de-escalation of the war.

It was three years ago – in February 2014 – that a U.S.-backed and -funded movement called Euromaidan, led by neo-Nazis and right-wing Ukrainian nationalists, toppled the elected government of Ukraine. In its place, this movement, portrayed as a “popular revolution” in the West, installed an open dictatorship of oligarchs, neo-Nazis and politicians loyal to the U.S and European Union.

The new junta in Kiev declared war on the primarily Russian-speaking and working-class population of the country’s southeast, leading to uprisings in many cities and the secession of Crimea, Donetsk and Lugansk. In mass democratic referenda, Crimea opted to rejoin the Russian Federation, while people in the Donbass mining region declared independent Donetsk and Lugansk People’s Republics.

The Obama administration condemned Russia’s reintegration of Crimea, imposing sanctions, and using the events Washington itself helped set in motion in Ukraine to put the NATO military alliance on a provocative war footing in eastern Europe.

Kiev, armed and funded by the West, suppressed the protests in eastern Ukraine and declared war on Donetsk and Lugansk. Fighting raged for almost a year before Ukrainian forces were decisively beaten by the popular anti-fascist militias of local workers and international volunteers in early 2015. At that time a peace accord, known as the “Minsk II agreement,” was brokered by Russia, Germany and France. However, the Kiev junta and its U.S. backers have dragged out negotiations while constantly violating the ceasefire agreement.

In all, according to the United Nations, nearly 10,000 people have died as result of Ukraine’s so-called Anti-Terrorist Operation (ATO), including more than 100 children. Hundreds of thousands of people were forced to flee their homes, most seeking refuge in Russia. An economic blockade by Ukraine and the West has increased the suffering of Donbass residents struggling to rebuild their homeland. 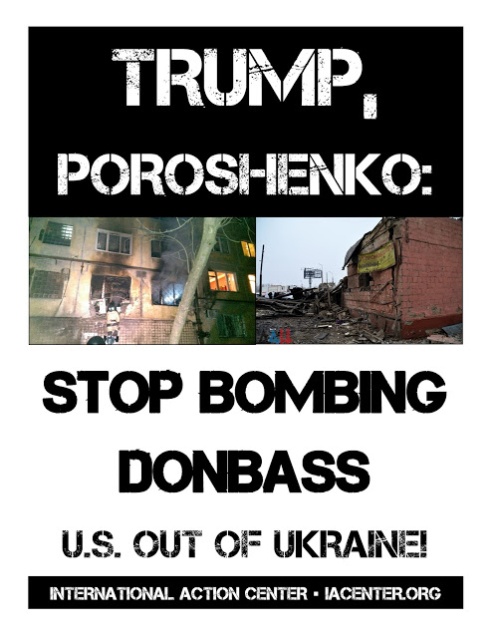 According to Col. Eduard Basurin, deputy commander of the Donetsk defense forces, Ukraine launched over 15,000 attacks on the republic in the space of a week. (Donetsk News Agency, Feb. 3) This includes attacks by banned heavy weaponry like “GRAD” and “Hurricane” missiles on the capital on the night of February 2. This was confirmed by observers of the Organization for Security and Cooperation in Europe (OSCE), according to the independent Odessa website Timer on Feb. 6.

Ukrainian attacks targeted the city’s water treatment facility, as well as residential buildings and a busy highway, leading Russia’s Foreign Ministry to denounce Kiev for violating the Geneva Convention for the Protection of Civilians in Time of War. (RT, Feb. 3) Water, electricity and gas were cut off in the dead of winter. Donetsk officials evacuated residents of the heavily bombed Kievsky district on Jan. 31. At least 10 civilians have been killed in the capital.

Basurin reported that 33 towns and villages were hit during the week, including Gorlovka, Yasinovataya and Dokuchayevsk. In Makeyevka, one of the hardest-hit towns, elementary school children were forced to take refuge in an underground bunker when their school came under attack Jan. 30. A local hospital was also bombed, killing a woman. (DONi News Agency)

Meanwhile, in Lugansk, Ukrainian attacks also escalated in late January. In the frontline town of Kirovsk, where the Ghost Brigade anti-fascist militia is headquartered, two civilians were killed in separate attacks, according to Brigade Commander Alexey Markov. Lugansk military chief Oleg Anashchenko and two others were killed in a car bombing on Feb. 4.

Now Ukraine has opened up a new front of attack in the south of Donetsk. Igor Podgorny, head of Sakhanka Village, told DONi News Agency that “battles are taking place along the whole southern front. The villages of Sakhanka, Leninskoye and Kominternovo are under shelling.” (Feb. 6)

With the buildup of tanks and heavy weaponry by the Ukrainian Armed Forces, Donetsk Deputy Commander Basurin warned that the republics expect a full-blown military offensive by Kiev.

What has been the response from Donald Trump, who claimed on the campaign trail that he wanted to improve relations with Russia?

At first, while the killings were mounting, Trump’s administration was silent. Instead it was crowing over the administration’s first military foray in Yemen, where at least 30 civilians, including children, were killed.

Then on February 2, Trump’s Ambassador to the United Nations Nikki Haley, in her first official statement, condemned Russia’s “aggressive actions” in Ukraine – the very same lie trotted out by the previous U.S. administration to cover up Kiev’s war crimes. (AFP, Feb. 2)

The following day, news site Politico broke the story that Trump had held a private meeting with far-right Ukrainian politician Yulia Tymoshenko on the sidelines of the Feb. 2 National Prayer Breakfast, where he had promised to demolish the separation of church and state. According to Tymoshenko and other sources who briefed Politico, Trump promised Tymoshenko that he would not lift sanctions on Russia until it “returns” Crimea and ends support for the Donbass republics. The White House later released a statement saying Trump had not promised anything to Tymoshenko.

In a Feb. 4 phone call with Ukraine’s President Poroshenko, Trump mouthed the familiar U.S. line to “cooperate with leaders of Russia, Ukraine and other nations to restore peace in war-torn Donbass.” In a call the same day between Trump and Jens Stoltenbeg, the U.S. oligarch reassured the NATO secretary general of his support for NATO and that he would participate in the 2017 NATO summit in Brussels. (Sputnik News, Feb. 6)

The contradictory statements emanating from the White House may reflect internal struggles within the administration over how best to control Russia as Trump launches threat after threat against Moscow’s allies Iran and China. But the overall picture is one of imperialist continuity, not the hoped-for “breakthrough” to ease the war crisis.

Now more than ever, the heroic people of Donbass need the support of antiwar and anti-fascist forces in the U.S. and around the world. Educating the newly-awakened movement fighting the attacks of the Trump administration in the spirit of internationalist solidarity will be key.