Moscow, August 31: Vladimir Lakeev, first secretary of the United Communist Party (OKP), reminded the authorities and residents of the capital of the 100th anniversary of the October Revolution, which will be celebrated next year.

At the arch at the main entrance of the VDNKh [Exhibition of Economic Achievements of the USSR], Lakeev released a banner declaring “October 2017 is coming soon” and lit flares. At the same time, flags of the United Communist Party and a banner reading “Down with the oligarchs!” were unfurled. 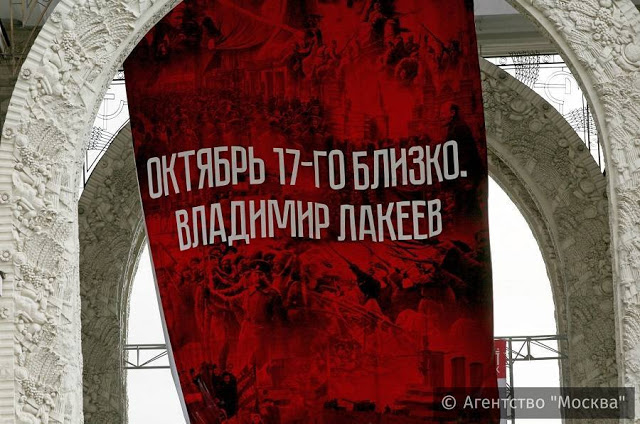 Muscovites who witnessed this event immediately began to shoot everything on mobile phone cameras. In response, police arrested several people. The “guardians of order” didn’t stop despite the fact that Vladimir Lakeev and another detained OKP activist, Vladimir Strukov, are registered candidates in the election for state duma deputies, and therefore have immunity. Not for the first time, we must note – they have very poor knowledge of the laws they’re supposed to uphold. 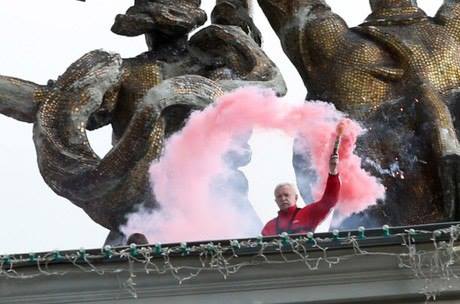 By evening the communists had not yet been released from the police station.

As stated by Vladimir Lakeev, this action opens up a series of activities by the OKP to commemorate the anniversary of the Great October Socialist Revolution. And nothing can stop the party from celebrating this holiday and reminding the citizens of this great date.

2 thoughts on “Dramatic action by Moscow communists proclaims: ‘2017 is coming’”