May 24: Just a few hours ago came the shocking news: former Chief of staff of the Ghost Brigade of Alexei Mozgovoi, his colleague and right-hand man, Yuri Shevchenko, who replaced the deceased brigade commander and, subsequently, headed the fourth brigade NM LNR, was fired from his post this morning by [Head of the Lugansk People’s Republic Igor] Plotnitsky personally in his office. The reason given was his participation in the installation of the monument of Mozgovoi in the city of Alchevsk.

Yuri Shevchenko himself reported this his Facebook page, and it was confirmed by many fighters of the brigade.

This is another flagrant fact of political repression toward the legendary commanders of the militia and their allies.

We are awaiting further developments.

There is a possibility of further layoffs of other officers involved in the installation of the monument to A. Mozgovoi. 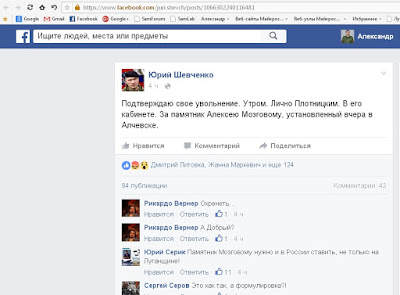