Slavyansk Resistance Online, along with all long-suffering souls of the hero-cities under occupation by the Ukrainian-nationalist clique, congratulates all residents of Donbass on the 94th anniversary of “February 23 – Defender of the Fatherland Day (the Soviet Army and Navy of the USSR)”! 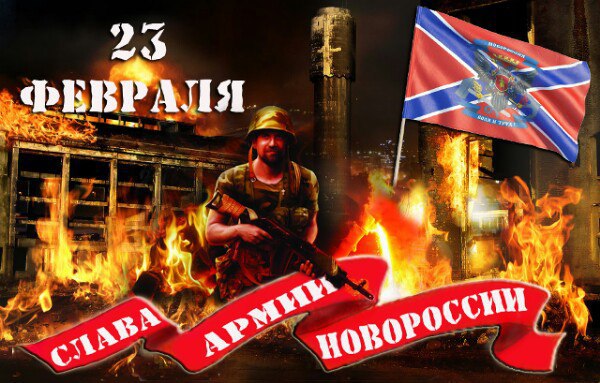 This holiday was established on the proposal of People’s Commissar for Foreign Affairs Leon Trotsky during a difficult period for the Soviet power, in order to maintain the morale of the fledgling Workers ‘and Peasants’ Red Army, which was tempered in the field by civil war.

Now, after almost 100 years, we feel more than ever the moral and psychological support of the memory of our ancestors in the fight against Ukro-fascism.

Yes, times have changed, but the duty of defending the homeland remains unchanged. Each of us takes up arms and fights on different fronts: one with a gun at the front, in the information war, or as an invisible fighter in the rear — we all work for victory! For victory, regardless of gender.

Congratulations to all! – February 23 – Defender of the Fatherland Day!

Defender of the Fatherland Day was established in the Russian Soviet Federated Socialist Republic on January 27, 1922, when the Presidium of the Central Executive Committee of the RSFSR issued a decree on the fourth anniversary of the Red Army, which stated: “In accordance with the decree of the IX All-Russia Congress of Soviets on the Red Army, the Presidium of the Central Executive Committee draws attention to the upcoming anniversary of the founding of the Red Army (23 February).”

Translator’s note: The city of Slavyansk has been under occupation by the Ukrainian Armed Forces and fascist gangs since the People’s Militias were forced to retreat in early July 2014 to defend the capital of Donetsk.