February 15: The regime unleashed armed SWAT police on the Petrenko Group political prisoners, after expelling the media from the courtroom.

The incident took place in the courtroom of the Riscani Sector Court in Chisina, Moldova, on Monday, February 15, and was captured on a mobile phone by a witness. The exclusive footage was published by OMEGA News Agency.

The violent police actions continued in the hallway of the court: former parliamentary deputy and honorary member of PACE Grigory Petrenko and his comrades, handcuffed, were forcibly dragged by their feet from the courthouse.

These unreasonably cruel actions by riot police were filmed and published on social media by a leader of the protest movement, journalist Vasile Nastase.

The press at this time was blocked by police in the corner of the corridor of the court building. Journalists were forbidden to film the special forces’ “operation.” 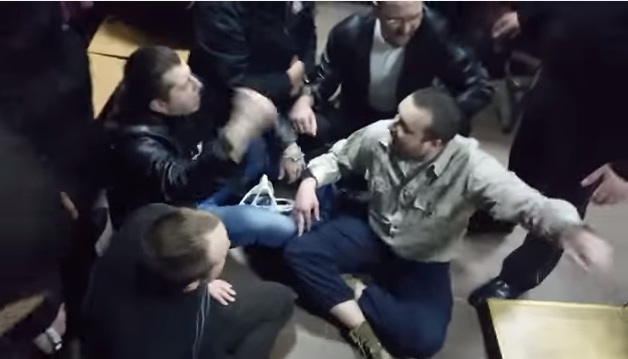 It should be noted that the hearing at the Riscani Sector Court on Monday, February 15, was attended by representatives of the embassies of the EU, the United States and the European Union delegation in Moldova.

Recall that several members and activists of the opposition party Red Bloc, headed by former deputy and honorary member of PACE Grigory Petrenko, have been under arrest since September 6, 2015, after a peaceful protest in front of the General Prosecutor’s Office against the oligarchic regime.