On February 8, in school № 30 in Donetsk, an event was held entitled “Patriotism: A View of Generations,” dedicated to school graduate, journalist and soldier Vsevolod Petrovsky. The meeting, organized by the Patriot Club, was attended by teachers and students, veterans of the wars in Afghanistan and Donbass, and friends and colleagues of Vsevolod, according to the official site of the Donetsk People’s Republic (DPR). 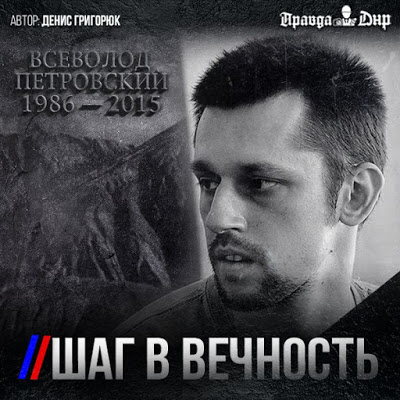 “Seva read a lot, had a phenomenal memory, and encyclopedic knowledge,” remembers teacher Tatyana Koptelova. “He was always persistent in achieving his goals, which helped him take first place at the History Olympics. Sometimes he left poems he wrote in his school notebooks. They expressed very deep thoughts about the meaning of life and its relation to what was happening around him.”

“Today’s event shows that Vsevolod Petrovsky did not live his life in vain. To me, he was not only a wonderful friend, but also a great journalist and public figure. In the spring of 2013, Vsevolod and I, along with future head of the Ghost Brigade political department Eugene Wallenberg, founded the Guernica Club, which united youth with anti-fascist views. We were already aware that fascism was a problem all over Ukraine, not just in the western regions. In February 2014, together with Vsevolod, we stood duty near the monument to Lenin, took part in anti-fascist rallies, and in the summer began working with the Ministry of Information of the DPR,” said Ministry representative Stanislav Retinskiy.

At the meeting, soldiers-internationalists shared memories of their comrades’ exploits. Those present honored the memory of those killed during the Great Patriotic War, the war in Afghanistan and in Donbass.

“Patriotism means good works done for the benefit of the country, like honoring the memory of the heroes of the Great Patriotic War, Afghan veterans, heroes of the Chechen war and the current fighters who protect Donbass,” said Vladimir Saveliev, chair of the Union of Afghan Veterans of the DPR.

“My grandfather fought in the Great Patriotic War and heroically defended this land. When it became necessary, I too came to the defense of Donbass. My conscience would not allow me to do otherwise,” said tank platoon commander and Hero of the DPR Andrei Zaitsev.

During the event, pupils of schools № 30, №101, and school of arts №5 presented their creative efforts. According to organizers, the meeting devoted to Vsevolod Petrovsky marked the beginning of a cycle of patriotic events to be held this February.

Memorial for Seva Petrovsky at Secondary School No. 30 in Donetsk