The struggle against the oligarchs has long been a popular slogan in Ukraine, but there was little meaning behind the phrase. While the need for such a struggle was acknowledged by virtually all politicians and political forces, they also carried out numerous and costly election campaigns on the dime of the same big capitalists. Ukrainian voters simply stopped believing in anti-oligarchy slogans, preferring to vote for the protégé of “their” oligarch. The principle of “our son of a bitch” worked in all recent elections, where the final outcome came down to representatives of “Ukrainian” vs. “Russian-speaking” oligarchs. Even the Communist Party of Ukraine, whom it would seem Marx himself ordered to fight against big capital, preferred to forego this dangerous path of struggle for comfortable alliances with the winning group of oligarchs.

Then came the winter of 2013-2014, when the delicate balance of the oligarchic consensus was broken, first by the cold winds of the global crisis, and then the brutal interference of external forces in the political struggle within the country.

In part because of the shrinking of the “pie” which the oligarchic groups shared, in part because of the excessive greed of Viktor Yanukovych’s entourage, virtually all Ukrainian oligarchic groups united in the struggle against his “family clan,” which included relatives and close friends of the president. Almost without exception, the oligarchs of the country supported the Maidan.

Even the “boss” of Donbass, Rinat Akhmetov, after some hesitation, supported the Maidanists — during a personal meeting with the oligarch, U.S. representative Victoria Nuland found the correct arguments to persuade ​​the main sponsor of the Party of Regions to believe in the ideals of the “revolution of dignity.” In May 2014, while the Ukrainian army shelled peaceful neighborhoods in Slavyansk and Kramatorsk, this “Patriot of Donbass” embraced Poroshenko at his inauguration.

The head of the presidential administration, Sergei Lyovochkin, also moved to the side of Maidan, his wife pointedly joining the protesters.

It’s strange to recall, but even part of Yanukovych’s “family clan” invested money in Maidan, counting on the protests to help them replace Prime Minister Mykola Azarov with “our son of a bitch” Sergei Arbuzov, a friend of the president’s son.

The conjunctural alliance of oligarchs against Yanukovych was welded together with the patronage of the U.S. and EU, which deftly used the clans’ political game to impose on the Ukrainian oligarchs an “oath of allegiance” to the “ideals of European integration.” Just a few months after the victory of Maidan, the U.S. embassy became the sole arbitrator of the conflict between Ukrainian oligarchic groups, and by the end of 2015, Ukrainian politicians proudly wrote about how this or that of their actions met with approval from U.S. officials.

The union of the oligarchy, however, led to an undesirable side-effect for Ukrainian elites: The southeast of the country was left without “their sons of bitches.” And then the real popular protests began, suppressed by force in Odessa and Kharkov, victorious in Donetsk and Lugansk.

Yanukovych fled in disgrace, unconcerned about “his” southeast. Recall that it was he who started the unpopular process of “European integration” in the Russian-speaking regions — the actual transformation of Ukraine into an economic colony of the EU. That’s why, at the head of the popular protests against the nationalist coup d’état, we saw not leaders of the Party of Regions, but new leaders, who had not disgraced themselves in the eyes of the people through the old oligarchic parties and coalitions.

On the contrary, very often it was those old friends who were leading the bandwagon in Kiev’s “revolution of dignity” — co-founder of the Party of Regions and Minister of Economic Development and Trade under Yanukovych Petro Poroshenko, oligarch governors Kolomoisky and Taruta. Among the “new faces,” the only one with actual decision-making authority is retired Georgian President Saakashvili. 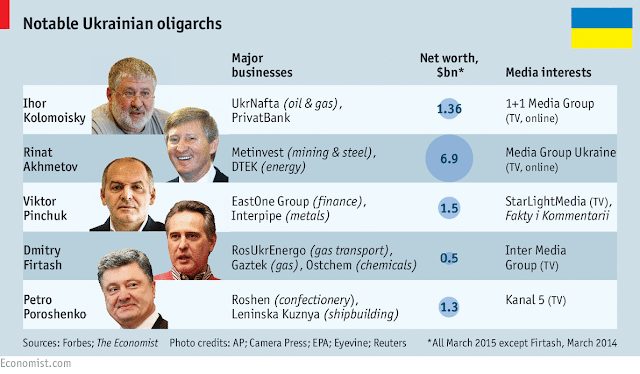 In the People’s Republics, the direct influence of the oligarchy began to decline. The old oligarchic officials for the most part fled, to be replaced by new people, who began the process of nation-building. Of course, oligarchic ownership and clan structures remained in the Donbass, but the balance of power had changed. Direct and blatant attempts to “return” to the Donbass met with determined resistance from the authorities, as it was with Kurchenko, whose businesses were expressly prohibited from working in the DNR and LNR after his machinations with fuel supplies in summer 2015. Nationalization, from a popular slogan, is gradually becoming a familiar and everyday reality in Donbass. In the rest of Ukraine, on the contrary, they are preparing to “chop off” the last profitable assets of the state — including such tidbits as seaports and railways.

Delays by the Ukrainian side in implementing the Minsk agreements also helped to ensure that the process of de-oligarchization continued. The influence of the Ukrainian oligarchs is waning, and their Russian counterparts, fortunately, have not rushed into the Donbass, for fear of sanctions and the difficulties with the officially unrecognized status of the republics by the Russian Federation. It’s as if Donbass, “suspended” between two political and economic centers of gravity — Russia and Ukraine – has been given a unique opportunity to carry out anti-oligarchic policies, instead of neoliberal ones.

Whatever the fate of the DNR and LNR, their achievements in the struggle against the oligarchy can be preserved as a basic achievement of the revolution in Donbass. If the peace process is frozen (and everything points to that), the unrecognized “second Transnistria” will be free to choose an economic model without looking at the dominant world standards. Ideally, the DNR and the LNR can even become a kind of “testing ground” for social-democratic economic policies in the spirit of the “Glazyev report.” The success of these reforms could show the way out of the crisis which the Russian leadership is unable to solve.

If by some miracle the Ukrainian side actually begins implementing the Minsk agreements, the anti-oligarchic achievements of the republics can still be saved. After all, there is nothing written in the Minsk agreements requiring the DNR and LNR to return the nationalized property of the oligarchs!

The fragile and uncertain truce following Minsk must be used by the leadership of the DNR and LNR to combat the internal enemy, which is the Ukrainian oligarchy. So, onward to 2016, the year of de-oligarchization!