December 15: I just returned from the funeral of Pavel Dremov. The ceremony began at eight in the morning and lasted until the afternoon – an endless stream of hundreds of people walked to the House of Culture in Stakhanov — locals and visitors, who all wanted to bid farewell to legendary Cossack Ataman.

Despite the bitter cold, there were many people. Soldiers of the Ghost Brigade, the 4th and 6th brigades and other units of the Lugansk People’s Republic came to honor his memory. 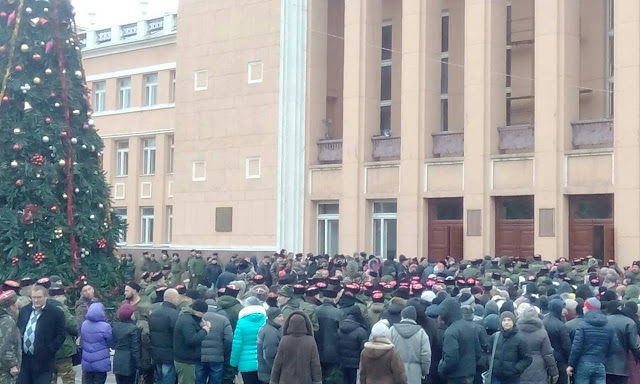 It was a very cowardly murder. Especially tragic for his wife, widowed immediately after their wedding. That day, he left the wedding ceremony suddenly and went out on some strange call. Just like Alexei Mozgovoi. He rode in a donated car, where an explosive device had already been placed. Who laid it there? When? Who gave him such a wedding gift? Is there a relationship between these actions? I am afraid that we will not know soon…

Pavel Leonidovich was a real father to his fighters. For this, they called him Papa. This man was an ordinary worker who gave all his strength to fight against the oppression of the common people, against the oligarchs and the Nazis. He fought for building a state of the people. It is a pity that his life was cut short so suddenly.
May he rest in peace! In loving memory!
Source
Translated by Greg Butterfield