Although banned, activists of Borotba (Struggle) in Kiev, Ukraine, took part in the march and rally in honor of the Day of Liberation of Kiev from the fascist invaders on November 6. 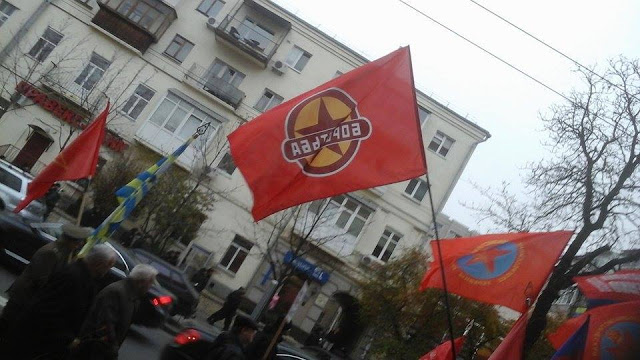 “Today, on the 72nd anniversary of the liberation of the hero-city of Kiev from the fascist invaders, the city is again under the occupation of the oligarchs and their Nazi collaborators. But the hour is approaching when the red banner of the struggle for a better world, the banner of victory over the hateful ideology of fascism, will again wave proudly in the streets and squares of the capital of Ukraine,” stated the Kiev Borotbists.

The great Ukrainian filmmaker A. Dovzhenko recorded in his diary on Nov. 6, 1943:

“The more I look at Kiev, the more I see what a terrible tragedy it has experienced. The population of Kiev is reduced to almost nothing. There is only a small group of beggars and poor people. No children, no girls, no youth. Only old women and the crippled. The picture is stunning.”

The capital of Ukraine was under constant occupation for two years. During that time, Kiev was completely looted by the Nazis. Before the war, there were about 900,000 residents in the city. After the liberation of Kiev, there are only about 150,000 left.

Kiev is waiting. The struggle continues!