October 19: This morning, residents of the Donetsk People’s Republic (DNR) held a rally at the office of the Organization for Security and Cooperation in Europe (OSCE) special monitoring mission in Donetsk, calling on the organization to monitor Ukrainian Armed Forces (APU) checkpoints, where security forces systematically violate people’s rights, reports a Donetsk News Agency correspondent from the scene. The OSCE representative promised to look into the situation.

The rally attracted about 500 people from all areas of Donetsk city, as well as Ilovaysk, Yenakiyevo and Shakhtersk. Residents of the republic came with placards reading, “Ukraine extortionists,” “Poroshenko’s hands are choking us at checkpoints,” “Ukraine, stop violating human rights,” and others.

“People are here to draw your attention to the facts about what Ukrainian soldiers do at checkpoints between the DNR and Ukraine. Even people who come to the DNR from Ukraine complain about the huge lines,” said one rally participant to the head of the OSCE Office in Donetsk, Olga Skripovskoy, who came out to speak with the protesters.

People expressed frustration at demands for bribes from Ukrainian security forces, as well as harassment of civilians crossing the border. One protester told Skripovskoy how guards at Ukrainian checkpoints force inhabitants of the republic to sing the national anthem of Ukraine, and if people refuse or do not know the words, they are not allowed to pass.

In turn, the head of the OSCE office in Donetsk promised the protesters that all claims about what is happening at the checkpoints will be included in the report of the OSCE. “Everything that you said today will be reported immediately,” said Skripovskaya.

Organizers of the rally proposed that the OSCE set up a separate group of observers who would always be present at checkpoints and monitor the situation. “As soon as the OSCE mission approach the roadblocks in their cars, the Ukrainian checkpoints open, and at this time there is smooth movement. Once the OSCE has passed — the checkpoint is closed and the line starts,” one of the protesters told DAN.

This is not the first time residents of the republic have rallied at the headquarters of the OSCE mission. Earlier, on July 23 and August 6, 2015, DNR residents held rallies expressing their dissatisfaction with what they saw as the biased work of the observers. 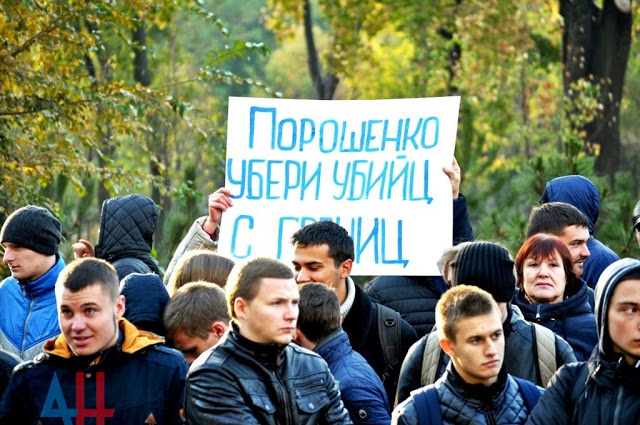