October 15: Residents of the Donetsk People’s Republic (DNR) held a mass protest today against the actions of Ukrainian oligarch Sergei Kurchenko. About 10,000 demonstrators gathered outside the capital office of the “Donetskoblgaz” company, controlled by Kurchenko.

The scale of today’s action significantly surpassed yesterday’s, which was held in the same place, with the participation of about 600 demonstrators. The earlier rally was attended mostly by workers of the gas industry and related enterprises, while today’s expressed much wider public outrage.

People got a chance to speak at an improvised podium on the steps outside the “Donetskoblgaz” office, and they did not hide their anger against the oligarch, whose activities, according to them, have threatened the energy security of the Republic and are now being investigated by the competent authorities. 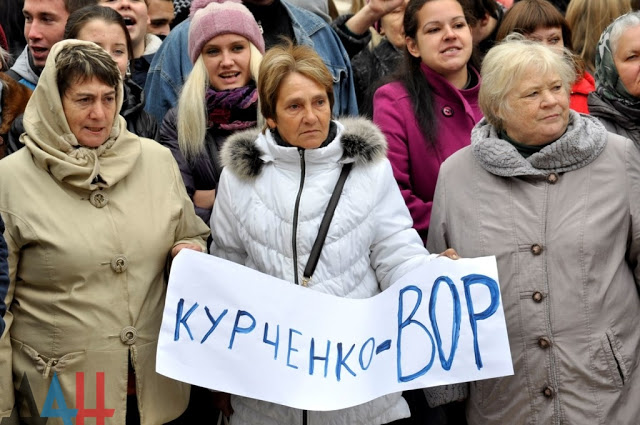 “The Kiev junta, by war, could not bring us to our knees. Our kids were sitting in basements, hungry and cold,” declared a woman who lives in the capital. “Since they were unable to bring us to our knees by war, now they make us cold, stopping the flow of gas. Our children who did not die then will now freeze again, unable to go to school and kindergarten. Kurchenko has no right to toy with our lives. Out of the Donbass!”

Demonstrators who shared the speaker’s dismay and indignation shouted in unison: “Kurchenko — thief! Kurchenko – out!” Like yesterday’s rally, there were calls in the strongest terms for the authorities to put an end to the criminal business of Kurchenko in the Republic. Citizens said that they were awaiting the results of a criminal investigation, which in accordance with the instructions of the head of the DNR Alexander Zakharchenko, has begun against the institutions of the Ukrainian oligarch.

In conversations with a DAN correspondent, rally participants noted that in the past year, despite the intense fighting, public utilities of the Republic managed to promptly open the heating season. Now, during the ceasefire, the people face cold due to Kurchenko. If recently they called him a “fugitive oligarch,” today he was directly described as “a crook.”

As stated earlier by Zakharchenko, because of the actions of Kurchenko, pressure to the main gas pipeline in the DNR has fallen by almost half (from 8.5 kgf/cm2 to 4.5 kgf /cm2). On October 14, the head of the Republic guaranteed that the authorities will do everything possible to eliminate the consequences of this, in his words, “act of sabotage” against the young state.

Back in September, the head of the DNR signed a decree imposing sanctions against Kurchenko and his controlled companies. The Ukrainian businessman and affiliated persons and entities were prohibited from conducting business activities on the territory of the DNR. The Prosecutor General of the Republic filed a criminal case against one of the companies affiliated with Kurchenko.

According to investigators of the Interior Ministry, the actions of this company actually led to the fuel collapse in the DNR. In turn, the People’s Soviet of the DNR created a parliamentary commission to investigate Kurchenko’s activities, in particular his attempts to gain control of the Khartsyzsk pipe plant.

At its meeting yesterday, the Soviet decided to send a parliamentary appeal to the Ministry of Coal and Energy, the Ministry of Revenue and Taxes, the Interior Ministry, Ministry of State Security and Prosecutor General of the Republic.