Protesters demanding freedom for Grigory Petrenko and imprisoned Red Bloc activists picketed outside the Republic of Moldova’s Permanent Mission to the United Nations in New York on Sept. 21.

The protest had two aims: to show solidarity with the seven anti-oligarchy activists, who were jailed for 30 days following a peaceful protest in Chisinau on Sept. 6, and to begin informing working-class people in the United States about the situation in Moldova.
As activists chanted, held signs and handed out informational leaflets to passersby, they saw staff members of the Moldovan Mission peering nervously through drawn curtains.

As the picket ended, a protester hung a copy of the petition to free the Petrenko Group on the door of the mission. So far, the online petition has been signed by hundreds of people from the U.S., Moldova and other countries.

Protesters said they would continue to raise the issue of the Moldovan political prisoners at other protests during the UN General Assembly from Sept. 25 to Oct. 3.

The action was called by the Solidarity with Ukraine Antifascists Committee of the International Action Center.

Following is the press statement released by the protesters:

Today, as Prime Minister Strelet prepares to visit New York for the 70th United Nations General Assembly, we gather here in front of Moldova’s Mission to the UN to demand that his government immediately free seven imprisoned activists known as the Petrenko Group.

These seven activists from the Red Bloc party, including former member of Parliament Grigory Petrenko, were arrested and brutalized by police during a peaceful protest of hundreds in Chisinau on Sept. 6. The protest put a spotlight on how wealthy oligarchs dominate Moldova’s political process, especially Vlad Plahotniuc of the Democratic Party. The Red Bloc prisoners were sentenced to 30 days in jail for “plotting a riot.” But in fact it was the police who rioted, injuring many.

While Moldova’s officials and media engage in scare-mongering, Red Bloc has been organizing Moldovans from all ethnic and language groups against austerity measures, such as hikes in utility rates and fuel prices. These protests were successful in forcing the regime to step back from implementing some price hikes. That is why Petrenko and his comrades were targeted. 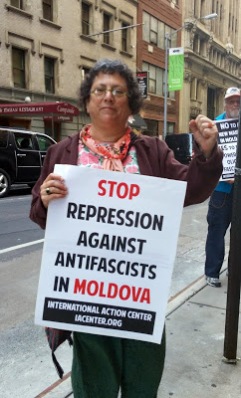 Since the arrests, family members of the prisoners have been harassed. On Sept. 15, prosecutors and police were caught on amateur video planting false evidence in the car driven by Grigory Petrenko’s spouse. Red Bloc members have reported harassment, illegal searches of home and offices. We demand that this harassment end immediately.

Moldova is in turmoil today thanks to the domination of greedy oligarchs, Western banks, and the U.S. and European Union. Moldova is in danger of falling into the same abyss of austerity, fascism and war that has engulfed its neighbor Ukraine. Last week the government implemented new measures that echo the right-wing nationalism in Kiev, such as banning the Russian language on trains and buses, and ordering the destruction of Soviet-era monuments to Moldova’s liberation from fascist occupation in World War II.

Unfortunately, some of those leading protests in Chisinau today under the umbrella of the “Yes Coalition” are in fundamental agreement with the government. They, too, want to pursue “Euro-integration,” merger with NATO member Romania, privatization and right-wing nationalism against the country’s minority language groups.

Washington officials and Wall Street bankers would be happy to see Moldova become the next Ukraine, to help them further NATO expansion in the east. But it would be a disaster for the workers, farmers and pensioners of Moldova.

Grigory Petrenko and the Red Bloc are the best antidote to this situation. They have been working to build a united movement against austerity, for peaceful relations with Moldova’s neighbors, true to the country’s proud anti-fascist traditions.

Prime Minister Strelet, the ruling Alliance for European Integration, and Western officials all claim to represent “democracy.” Yet their repressive actions show how they fear real democracy.

Release Grigory Petrenko now, today! Let the Red Bloc speak and organize freely. We believe the Moldovan people will then chose the path of peace, social justice and anti-fascism represented by Petrenko.