Posted on May 29, 2015 by allpowertothesoviets
Interview by Katerina Ruskevich, LIVA
LIVA editors’ note: This is one of the last interviews given by Alexei Mozgovoi, commander of the Ghost Brigade, who openly declared that the people of Donbass and Ukraine must join forces to put an end to the reign of the super-rich capitalists on both sides of the front line. 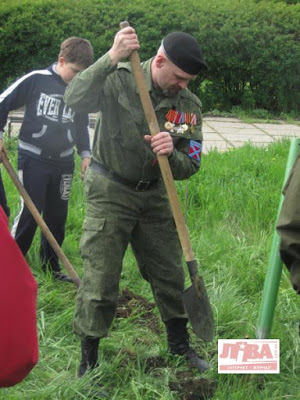 On May 9, 2015, immediately after the Victory Day festivities in the center of Alchevsk, in the Lugansk People’s Republic, we headed to a working-class district of the city, to a playground that his soldiers were helping to build.
Ukrainian politicians usually turn such events into a PR stunt. But at the new playground, there were no local journalists with cameras or onlookers. Putting their weapons aside, Mozgovoi and the soldiers from his unit, along with communists from Greece and Italy, worked together with shovels and crowbars to install swings and slides for children, while talking among themselves. They also received support from several kids who lived nearby. There LIVA journalists had the opportunity to ask Mozgovoi some questions. 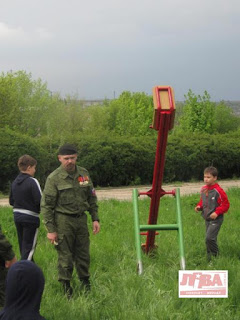 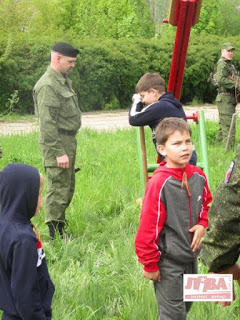 those May days, the town of Alchevsk welcomed a unique event – the International Solidarity Forum “Anti-fascism, Internationalism, Solidarity,” which brought together left-wing activists from Italy, Greece, England, Germany, Spain, Poland, Turkey, Belarus, Russia and Ukraine. Among them were representatives of well-known leftist bands – the Turkish Grup Yorum and Italian Banda Bassotti — as well as several international journalists.
At the last moment, the Lugansk authorities refused to support the forum for being “too left,” and Mozgovoi then decided to host the conference in Alchevsk. He was not afraid of a possible conflict over it, as he himself said at the opening of the forum, where he also actively, without any arrogance, engaged with left journalists.
Forum participants had the opportunity to see the kind of work that the Ghost Brigade commander and local communists and political activists of the brigade were carrying out in Alchevsk: aid to kindergartens and schools, free distribution of medicines and food for the needy. They also learned about plans for the reconstruction of the war-torn region, whose former “masters” have long since fled to Kiev, Moscow or the European Union. 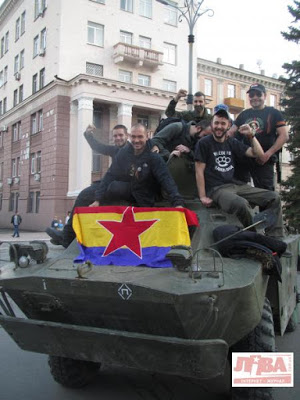 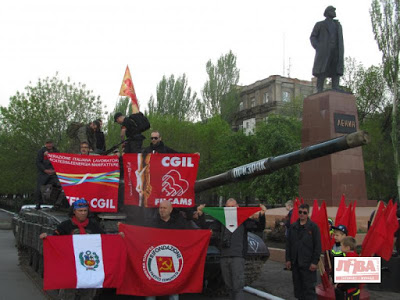 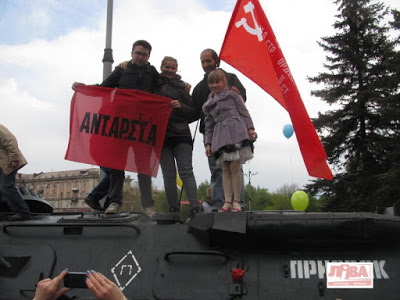 Talking with local people in the streets of Alchevsk and Stakhanov during celebrations in honor of Victory Day and at concerts which brought out thousands of people, they could see the Mozgovoi’s popularity among the residents, with whom he always spoke frankly and openly.
All this was taken up during heated discussions among the international visitors,including an activist who had just returned from Rojava and talked about the experience of Kurdish self-government; Greek and Spanish activists arguing about the politics of SYRIZA and Podemos; an organizer of the British trade union movement who shared his practical experience; and Italian leftists who talked about the importance of new technologies for the development of the left movement, immediately offering to share their practical skills.
Of course, all this could not but influence Mozgovoi, helping him to better define his own ideological views, which were still somewhat blurry – as inevitably happens to anyone who is new to revolutionary politics. And so it is especially regrettable that this extraordinary and brilliant person died tragically a few days later, on the outskirts of Alchevsk, killed in an ambush along with his press secretary and security team.
A wave of commemorative rallies immediately followed – not only in the Donbass, but in many countries around the world. They demonstrate the symbolic importance of this man, precisely because, while many nationalist intellectuals fuel the fire of civil war in the interests of the capitalists, Alexei Mozgovoi, a native of Nizhnyaya Duvanka village, openly declared the need for a class struggle that could unite all Ukrainians in the fight against their true enemy. 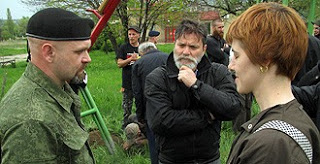 LIVA: Alexei, you helped to organize the international anti-fascist forum, which was attended by activists of communist, trade unionist and student organizations – more than 100 people from 10 countries. Everyone knows that the authorities of Lugansk, who initially promised to assist in organizing the forum, finally refused to support it. But when the organizers then appealed to you, you immediately agreed to host the forum in Alchevsk. What is the importance of such an event? It’s an unusual event – and not only for war-torn Donbass. We can say that in the former Soviet Union, there is nothing resembling this left forum. Alexei Mozgovoi: I think we should use this opportunity to talk about what’s happening in our region and receive support from like-minded people. We understand that the media – and not only Ukrainian – distorts everything. We know that Ukrainian channels never tell the truth about what is happening in Donbass. In Europe, I think, it’s the same thing. This meeting, this congress, opens up the opportunity to the people who came here by themselves – on their own, I emphasize, of their own free will, because we did not know them before, and didn’t invite them – to see firsthand how we live here, what we’re doing, what’s actually happening, both in Alchevsk and the Donbass. Journalists, too.
Yes, there was pressure on us. But we held the meeting, nevertheless. I want our guests to have the opportunity to talk to local people, to see how we live, our problems and our work. This is how we can learn from each other. That’s why I supported the event. We are all free and live on liberated land. The monuments to Lenin are not being demolished here, and no one prohibits red flags or thehammer and sickle.
We are sharing our experiences, learning many new things. We were just talking about the civil war in Greece and what really happened. 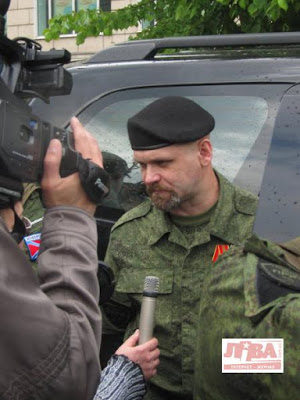 LIVA:Last May, you said that the oligarchs are the main enemy of the people of Donbass and Ukraine. Has anything changed, or do you still hold that position? AM:Nothing has changed. The oligarchs are still our main enemy. Not only for us, but for the inhabitants of Kiev and Dnepropetrovsk. All the time I want to ask them: why are they fighting against Donbass, but not against these oligarchs?
But there is another enemy: ourselves, I would say, our obstructed consciousness. You can’t lie to yourself, hoping that somehow everything will fix itself, that everything will be fine. We just don’t have time for such falsehoods. We must accept responsibility and act. LIVA: Tell us about your social projects. We have seen how you help the local population: a network of free food distribution points was established, kindergartens and schools were rebuilt, and teachers’ salaries are paid, at least partially. Now there are playgrounds…

AM: We do what a government based on people’s power should do – one which doesn’t hide from its people, doesn’t lie to people or spit on them. We help the poor and needy, trying to reach everyone who needs help because of the war.
Assistance for kindergartens and schools is the main task under any conditions, however. They have to function; even a war should not prevent children from learning. We simply help ensure that schools function, children can go to their classes and the teachers can work as they always have. Without this there is no future.
And playgrounds for children… They should be built to help ensure we will not be digging trenches in the future. I believe thatwe should pay more attention to the education of young people, to ensure that these children are not educated by television for the Right Sector [Ukrainian fascist/nationalist group], but for us.  We think that there is a need to set up youth clubs, and we have already organized the football club “SKA-Ghost.” There the kids play football and talk with the militia. Those kids are usually neglected. In Ukraine we see now where that leads.
LIVA: How can you ensure that these social policies are implemented in wartime conditions? AM: This is no easy task. We have tried to organize a system of subsistence agriculture, our “collective farm,” to feed Alchevsk with our own products so that we are not dependent on anyone. This is starting to improve our situation. Four free social canteens are feeding about 7,000 needy people in the town – you have seen them and talked to people who eat there. But this is only the beginning. 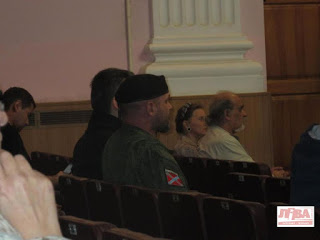 LIVA: The anti-fascist forum coincided with the celebration of the anniversary of Day of  Victory over Nazism. What does anti-fascism mean to you? AM: It is the struggle against the enslavement of our people. Everyone has seen again how quickly an agreement can be reached between the Nazis and oligarchs, be it German oligarch Krupp or our oligarch [Igor] Kolomoisky. They established an oligarchy in our country and fascism inevitably followed.  The scheme doesn’t change with the times. And Victory Day is necessary, not only for parades, but to ensure that we never forget this. Many people once thought that this evil could never be reborn, since so much time had passed since the war. But, no. It has crept up again.   LIVA: What did you think of Banda Bassotti’s concert? Did you like it? AM: I heard songs that were familiar to me from the Soviet era. I heard songs of the Italian partisans. And you’ve probably seen how many residents of Alchevsk came to the concert, and how they cheered the songs. It was a real holiday for the city. 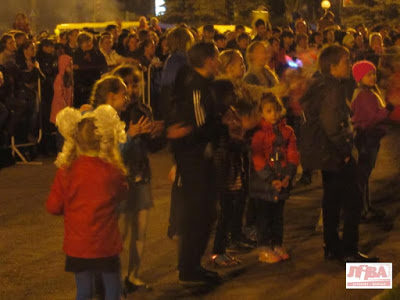 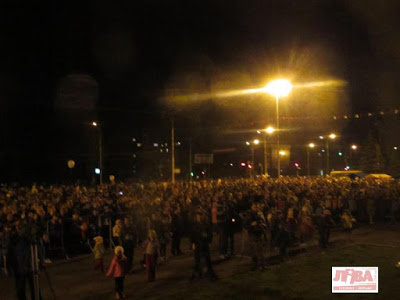 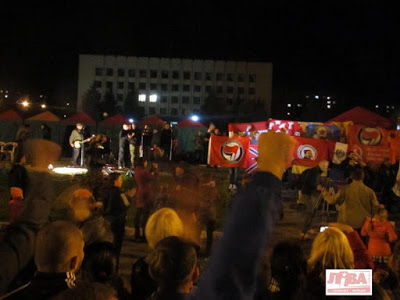