August 13: Shortly before the presidential elections in Belarus, a joint platform of political organizations and independent experts appeared and presented the “Resuscitation Reform Package” — a program for the republic’s economic revival.

Curiously, it is a copy of the Ukrainian project of the same name, which appeared after the Maidan events in 2014.

Political analyst Andriy Manchuk drew attention to this on Facebook.

“This is a program for the ‘economic revival of a future free Belarus’ … The coalition that promotes it is a clone of the Ukrainian ‘Resuscitation Reform Package’ — they haven’t even bothered to change the name. This is a grant-eating structure, which was formed in 2014 and supplies the Ukrainian government neoliberal reformers and experts — with an emphasis on privatization, denationalization of the economy, and promotion of the interests of international financial organizations and transnational corporations,” the journalist wrote.

He also noted that the official sponsors of the platform are the European Union, USAID, Pact, the European Fund for Democracy and the International Renaissance Fund. 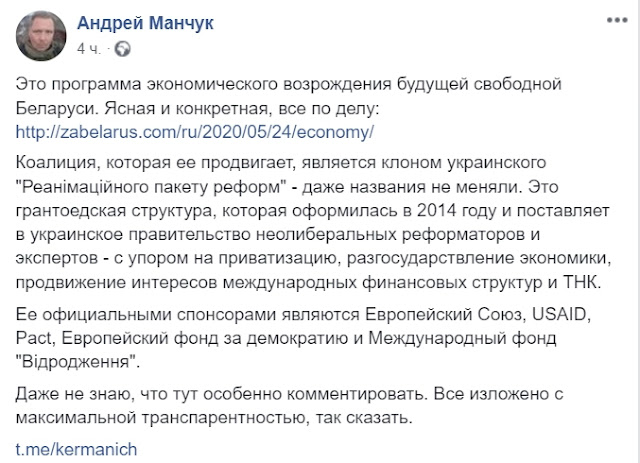 “At the beginning of 2020, seven political organizations joined forces to develop and promote the roadmap for the ‘Resuscitation Reform Package for Belarus.’ The most important areas of reform were selected in accordance with the expectations of the country’s citizens. Political parties such as the Belarusian People’s Front, the Belarusian Green Party, the Belarusian Social Democratic Party (Hramada), the Belarusian Christian Democracy, the United Civil Party, as well as the For Freedom Movement and the ‘Our House’ center of civil initiatives supported the initiative,” stated the platform’s website.

And the presentation of the “Resuscitation Reform Package” took place at the end of June 2020.

The coalition proposes to carry out reforms in various areas: local government, health care, the judiciary, pensions, housing and communal services, the fight against corruption, etc.

Encouraging the involvement of transnational corporations in the country is highlighted as a separate item. To do this, it is proposed to carry out large-scale privatization and demonopolization, develop a full-fledged land market, and adopt the basic EU norms and standards for goods and services. That is, in essence, to carry out the same reforms as in Ukraine.

It should be noted that the Ukrainian “Resuscitation Reform Package” lists among its achievements over five years participation in the development and implementation of such reforms as: anti-corruption, electoral, judicial, constitutional, economic and many others.

Protests began in Belarus after the August 9 elections. Their participants do not recognize the victory of Alexander Lukashenko. “Strana” wrote about how the fourth day of Belomaidan took place yesterday, August 12.

We also wrote that Lithuania, Latvia and Poland have prepared a plan to resolve the crisis in Belarus.