Posted on February 24, 2020 by allpowertothesoviets

On February 19, the newspaper La Stampa published an article by the famous French philosopher and politician Bernard-Henri Levy. The article contains an account of his recent trip to Ukraine and his tour along the front line in the Donbass.

Leaving aside any judgment on the author, on the article and on the meaning of the journey, it should however be pointed out that he provides us (involuntarily) with very precious data: Levy testifies to us about a serious war crime committed by the Ukrainians. 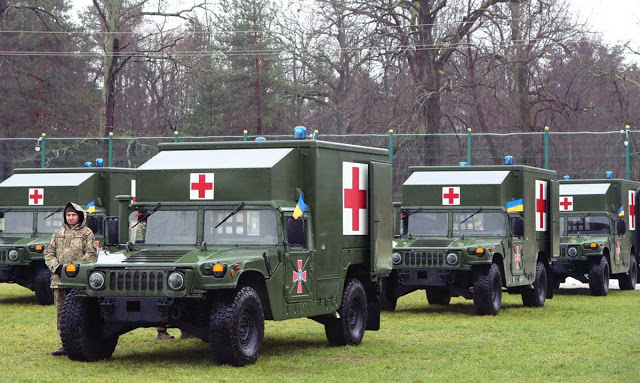 In his report, Levy recounts moving with the soldiers and says he traveled along the front line with “a fake ambulance passed off as real, armored, covered in red crosses.”

This is unacceptable and must be severely sanctioned; in fact the Geneva Convention prohibits this kind of trick. Using medical insignia to conduct military operations as well as a properly regulated crime is also something reprehensible from a human point of view.

For many years now there has been a rumor that the Ukrainian army was using medical cover to move troops and conduct military operations. With Levy’s report, not only is this confirmed, but it shows a further leap in quality: no longer are medical vehicles used for military operations, but armored vehicles disguised as medical vehicles. Another case in which (sadly) reality exceeds the imagination.

This, however, helps us understand the real dynamics of the facts that sometimes seem too petty to be possible. Ukraine has criminal and immoral conduct on the battlefield, something that is constantly confirmed by the facts (the most striking case is the constant indiscriminate bombing of civilian buildings), but on which the international community does not want to take a stand. The reason is well known and lies in the fact that values ​​are often bent to geopolitical convenience: our governments are playing a game in which one can only lose, both the game and their own identity.

It should also be remembered that in Donbass the OSCE has deployed its own observers on the ground, who should monitor such events. At this point there is no excuse: the crime, already reported several times, has been unintentionally confessed and therefore the opening of some inconclusive investigation cannot be enough. If the OSCE wants to save face, it must intervene in the fastest and most resolute way possible. If this is not the case, not only would the OSCE lose further credibility, but above all it would deal a serious blow to International Law and Peace.

This time we cannot pretend that we do not know, we must put an end to these crimes and sanction those responsible.

One thought on “Bernard-Henri Levy involuntarily testifies to Ukrainian crimes”