Posted on September 4, 2018 by allpowertothesoviets

The threat from the direction of Mariupol

By Colonel Cassad
Sept. 4: Regarding the threat of a Ukrainian Armed Forces (APU) attack, voiced by the military department of the Donetsk People’s Republic (DPR): 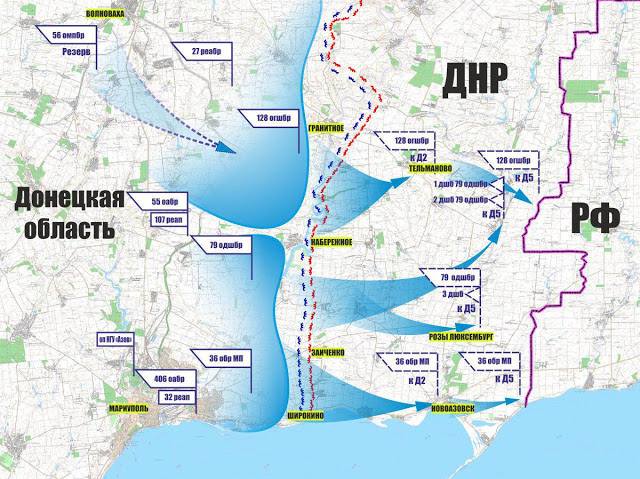 Kiev massed a 12,000-strong attack force on the Mariupol axis, Donetsk People’s Republic Operations Command deputy commander Eduard Basurin said on Tuesday. citing intelligence reports.
“The intelligence data received from sources in the Ukrainian Army General Staff, the Joint Forces Operation headquarters, and the headquarters of formations in the conflict zone make it clear that the enemy has built up an attack force,” Basurin said. “The Ukrainian formations’ manpower reaches over 12,000.
“If an offensive is launched, Ukrainian forces will begin artillery preparation using missile and cannon artillery. Next, the 36th Brigade deployed at Kominternovo-Shirokino moves towards Novoazovsk, while the 79th Brigade, positioned at Naberezhnoye-Zaichenko, attacks DPR positions on the Rosa Luxembourg settlement axis. Simultaneously, the 128th Mountain Assault Brigade creates a diversion offensive in the Telmanovo area while covering the left flank of the attack formation.
“The purpose of the operation is to reach the border with Russia in five days. The Nazi regiment Azov and raid teams of the 79th Air Assault Brigade will then start mopping up settlements across the seized territory.
“We’re ready to meet the enemy both in the air and on the sea. We’ll defend our citizens. Our units are absolutely battle-ready. The enemy won’t pass,” Basurin said.
Source: https://dan-news.info/en/defence-en/kiev-prepares-12000-troops-to-attack-dpr-basurin.html
* * *“Four mobile mortuaries on cargo refrigerators were dispatched by the 66th Military Mobile Hospital,” he said.
According to him, this step may be connected with the preparation for an offensive, the result of which will be numerous victims.
“The enemy understands that when carrying out such offensive actions, the number of victims will be counted in hundreds, if not thousands,” said Basurin.
He also added that in the course of combat operations mobile crematoria can be used to hide the real losses of the Ukrainian side during the fighting.
“We do not exclude that mobile crematoria, used by Ukraine to conceal its losses in 2014, will be delivered to the Mariupol area,” the representative of the DPR said.
Source: https://russian.rt.com/ussr/news/551253-vsu-perebroska-mobilnye-morgi1. The plan for a local offensive to the border is logical enough. The border with the Russian Federation is not far away, the positions of the DPR south of Telmanovo are constantly under pressure, and under the guise of routine fighting Ukraine can dramatically increase the number of troops at the front line and sweep the front right up to the border (for example, through Telmanovo or to the south).
2. Once at the border, they can try to fix the “achievements” associated with the cut off of Novoazovsky. The APU stationed the Volnovakh group for similar purposes in 2016-2017, which could have taken part both in surrounding Donetsk and in a breakthrough to the border through Yelenovka and Dokuchaevsk.
3. Such obvious plans do not translate into life because there is an extremely high risk that regiments of the APU that break through to the border will fall under the blows of the regiments of the [Russian] Southern Military District deployed in the Rostov region, as well as flanking attacks by troops in Novoazovsk and south of Donetsk, resulting in a new boiler and large losses for the APU.
4. In my opinion, Ukraine can go on such an offensive in two cases:

a) If it is fully confident that Russia will not interfere (in this case, the APU can actually try to solve a number of operational tasks);

b) If the U.S. dictates that the front in Donbass be heated up (for example, during the operation of the Russian Federation and Iran [with the Syrian Arab Army] in Idlib, to create an additional burden on the Russian military, since losses to the APU would be insignificant for the United States).
If the republic takes the necessary preparations for a possible strike south of Donetsk, and Russia makes it clear that an attempt to break through to the border will lead to sad consequences for the APU, the events will most likely continue to develop in a positional manner.
Source