Posted on May 8, 2018 by allpowertothesoviets

The Antifascist Caravan arrived in Donbass to once again declare its solidarity with the struggle against Ukrainian fascism. On May 6, more than 50 representatives from nine countries visited Makeyevka and Gorlovka with the support of local committees of the Communist Party of the Donetsk People’s Republic, the correspondent of the Vperyod website reports.

“On the eve of the two great holidays that are sacred in our land, Victory Day and the Day of the Republic, a large foreign delegation has arrived to us from Mexico, Portugal, Spain, Italy, Germany, Ireland, Russia and other countries. These are people who are upholding the anti-fascist struggle in their homelands. They came to support us, to congratulate us on the holidays, and also talk about how they support our Republic all over the world,” said the First Secretary of the Central Committee of the Communist Party of the Donetsk People’s Republic, Boris Litvinov. 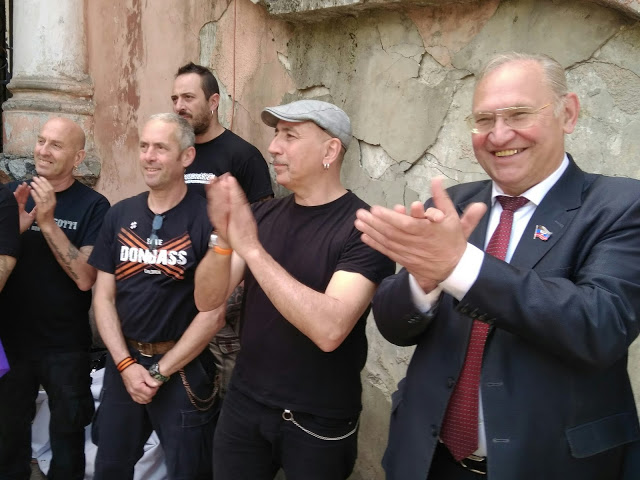 Representatives of the caravan handed over humanitarian assistance to Makeyevka Pioneers and Komsomols, as well as to Gorlovka children and families of various social organizations. It was collected as part of the “Children of Donbass” campaign in many countries around the world over several months. In turn, the kids presented the foreign guests with crafts and drawings prepared for Victory Day.

“This is the IV Antifascist Caravan which we are holding in the Donbass. We thought about it and decided the most important thing is to support the future of the country, in particular, the future of the younger generation. Throughout our trip we have seen how families and children are forced to live, when Ukrainian troops are bombing, how they are forced to hide in cellars, so we consider it our duty to support their daily lives.

“Within the framework of the ‘Children of Donbass’ campaign, we managed to collect a considerable amount of money, which has already been distributed to the children of Donbass and those organizations that deal with children. We brought not only money, but also medicines, toys, school supplies for children, and medicines for the militia. We believe that proletarian internationalism is the strongest weapon, so we try to use it as best as possible. We thank all the comrades from the Donbass,” said the manager of the Italian antifascist ska-punk group Banda Bassotti and head of the Antifascist Caravan, David Cacchione.

In Makeyevka, Banda Bassotti together with the local orchestral and musical variety group “Miners’ Dawn” performed for the city residents. The two bands performed both Soviet and Italian songs, such as “Katyusha” and “Bella Chao.” The concert took place in the Butovo Palace of Culture, a few kilometers from the front line.

“Honestly, we are not used to performing together with an orchestra, because we are a punk band. But it was a great honor for us to have the opportunity to perform with comrades from Donbass,” Cacchione continued.

The IV Antifascist Caravan includes representatives of different left parties and organizations. Among them are representatives of the Communist Party of the Russian Federation. They have been visiting Donbass since the beginning of the military conflict.

“The first time we came was in 2014. Despite some organizational problems, this support group has expressed itself as a very powerful anti-fascist international force. Since then, they have been collecting money from year to year, campaigning in their countries. This has already taken on an international scope. It’s good that people from all over the world come here. All of them understand that fascism is evil, it’s scary. We, as communists, understand that fascism is the product of imperialism, the ideology of imperialism. As long as there is imperialism, there will be fascism, because one thing is impossible without the other, “said Tatyana Desyatova, representative of the communist brigade of the Moscow Communist Party of the Russian Federation. 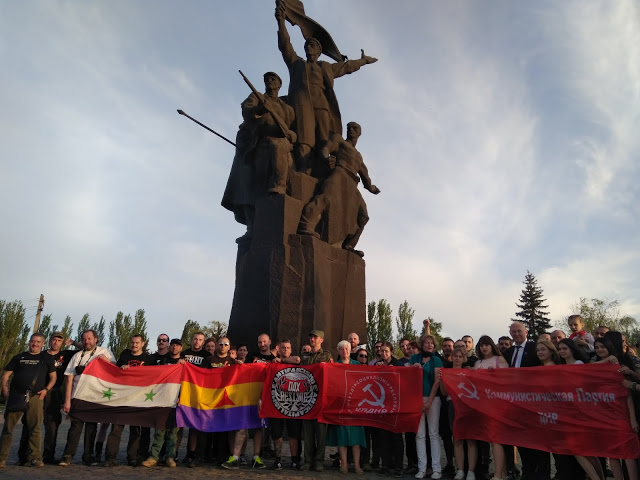 In Gorlovka, the Antifascist Caravan visited monuments erected in memory of dead fighters of the Civil War and Great Patriotic War, as well as to the victims of the current conflict in the Donbass. The anti-fascists were especially attracted to the monument to heroes of the Gorlovka armed uprising of 1905 — the largest uprising against tsarism during the first Russian Revolution.

As a result of the visit, the foreign delegates announced their intention to continue rendering all possible assistance to the people of Donbass, because they consider this struggle to be their own.