Message to the memorial for Victor Anpilov in Moscow, January 20, 2018.

I was deeply saddened to learn of the untimely passing of Comrade Victor Ivanovich Anpilov. My deepest sympathy and solidarity to his family and his comrades of Labor Russia and the Communist movement.

I met Victor Ivanovich in the grim days of 1992, when my party sent me to Moscow to make contact with Communists resisting the restoration of capitalism in the land of Soviets. I found him outside the gates of the Kremlin, where he was leading protests against the Yeltsin regime. Like Yuri Levitan’s famous “Moscow speaking” in the hardest days of the war against fascism, Victor’s confident words brought hope to revolutionaries the world over who were reeling from the overthrow of Soviet power in the land of the October Revolution. They cut like a knife through the bravado of the capitalist media gloating like jackals over the destruction of the USSR. 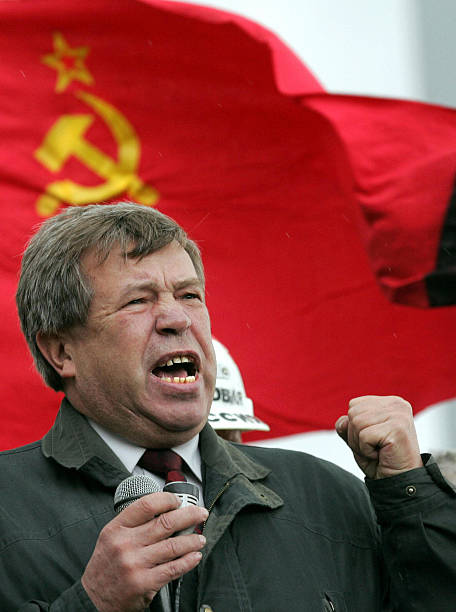 I still remember his vivid message to our 1993 May Day rally in New York City: “The working class never betrayed socialism. … Once again this May First, we will see the columns of workers marching to Red Square. Their flags will be red, their slogan eternal, ‘Workers of the world unite!” We watched with bated breath that May Day as Trudovaya Rossiya defied Yeltsin’s police to march on the streets of Moscow. And a week later as the regime kidnapped the leader of Labor Russia in revenge on the 48th anniversary of the Day of Victroy.

Our hearts were in our mouths as workers mobilized to defend the House of Soviets that terrible October and as we saw the bloody massacre that followed. We marched outside the Russian embassy to demand freedom for Victor Ivanovich and the Moscow antifascist fighters. And we were thrilled when the prison gates opened in February 1994 and the voice of Labor Russia could again be brought to the world. I will never forget that stirring May 1st, 1994, when thousands marched again under the red flag on the streets of Moscow.

Victor Ivanovich honored me with his time and friendship in the 1990s and I learned much from him. I was a guest in his home and came to know his family, Vera Anpilova, Anastasia and Sergei, his mother, and other comrades who gave me their hospitality. I’ll never forget the rickety van in which we used to travel around Moscow. We met with Moscow metro builders and traveled by train to Stalingrad and to his home in Taganrog in Kuban, where we dived for crayfish in waters near the Don. I watched him confront Mikhail Gorbachev when the “Best German” dared to come to Mamaev Hill in Stalingrad on May 9, 1995.

He was fluent in Spanish, among other languages, and I remember his love for Cuba and Latin American music and culture, for Victor Jara and Pablo Neruda. He taught me much about Russia and life in the Soviet Union. He was a brilliant orator with the ability to inspire confidence in others. Everywhere we went he spoke with people, listened to them and took an interest in their lives and problems. And he was always a people’s tribune, an agitator for socialism, a defender of the working class. His life and work affected and enriched the lives of many in Russia and around the world, including mine.

Much water has flowed away since those days, much has changed. But the cause to which he devoted his life, the cause of world socialism, remains more vital, more necessary, more urgent than ever. Let us honor his memory by continuing that fight and bringing it to victory.