The march Fără Frică was held in Chisinau, but not without incident

The march Fără Frică (No Fear) was held in Chisinau to support the LGBT movement. Despite numerous obstacles, LGBT activists and supporters were able to march several blocks.

The LGBT march held on Sunday, May 21, was not without incident.

Despite the fact that the marchers walked in silence and shouted no slogans, they were counter-protested on the street. The march was met by priests and opponents of the LGBT movement, who began to throw eggs.

As stated by the coordinator of Genderdoc-M Angela Frolov, “We were able to walk five blocks, it was five blocks of our democracy. We still have people who are afraid. The counter-protesters are afraid.”

Another representative of Genderdoc-M, Artem Zavadovsky, stressed that marchers proved that “Moldova has no fear.”

Sunday procession: The march in support of LGBT and counter-protest by Orthodox activists (excerpts)

On Sunday, May 21, for the fifth time, a march of solidarity with the LGBT community was held in central Chisinau. Although the participants did not reach the end of the planned route, and the police took them out of the city center by bus due to the counter-protest of Orthodox believers, LGBT march organizers described it as the largest and most peaceful in the history of Chisinau.

Orthodox activists, traditionally wishing to prevent the LGBT march, gathered near the monument of Stefan cel Mare singing hymns. A few confessors holding icons stood before the monument. The participants passed the icons and kissed them.

About 150 people gathered [for the counter-protest]. Many came with families. A separate group of men came with posters saying “No homosexual propaganda,” “We are for a traditional family.” On some posters there were images with crossed-out cocks. These were exactly the same posters Orthodox activists used in past years during anti-LGBT actions.

At one point, a priest appeared with a megaphone. “Let’s go immediately, otherwise they will change the route, and we will not get anywhere,” he warned through the loudspeaker. People obediently moved after him, stepping out onto the roadway of Banulescu-Bodoni streets and singing “Christ is Risen from the Dead.”

Members of the Orthodox march were reluctant to speak with the press. Several women with whom the NM correspondent tried to talk instead covered their faces with placards with the inscription “purity.” …

Meanwhile, participants of the march in support of LGBT people began to gather at the intersection of the Izmail and Bucuresti streets. The slogan and symbolism of the event remained the same as last year: white t-shirts with the inscription Fără Frică (“No Fear”) were distributed to the participants. No other slogans were used.

As the coordinator of Genderdoc-M Artem Zavadovsky explained to NM, the organizers did not change the concept of the march, as “Moldovan society still has not overcome its fear” [toward LGBT people].

The only innovation this year was flowers held by the participants, and silence. The organizers asked people in advance to march in silence and not bring any posters with them. …

One of the most popular participants in the march was the politician Grigory Petrenko [former political prisoner and leader of the communist Red Bloc], who came to the event with his wife. Petrenko was approached by people and thanked for his support for the LGBT community expressed in a column that he wrote for NM.

Petrenko told NM that after the publication of his column, “as expected, a lot of mud was thrown,” including from acquaintances. “On the other hand, this article scored a record number of likes. This shows that our society is improving,” he said. There were no other political leaders on the march.

Order during the march was provided by an impressive number of police. The Fără Frică march was cordoned off by dense rows of police in helmets and with batons. On Bucuresti Street — right up to the intersection with Alexandria — policemen were also lined up. Deputy Head of Police Gheorghe Kavkalyuk presided over the police action.

It was impossible to join the march after it began. Several people told NM that they could not join the march because police blocked all approaches to Bucuresti Street.

Representatives of the LGBT community and people in solidarity with them walked along the street silently, willingly smiling at the press. Many took selfies and conducted online broadcasts from the march, posting photos with the hashtag #flowerpower.

Human rights defenders Tatyana Kebak and Roman Banar walked holding hands. “We came to support the right to love,” Kebak told NM. “Those here today are really advocating for human rights, for the rights of all people,” said her companion.

At one point, rose petals showered down from a high-rise office building. The marchers enthusiastically applauded. Children who came to the march with their parents rushed to collect petals. It seemed symbolic. Last year, eggs flew from buildings which the LGBT march passed. 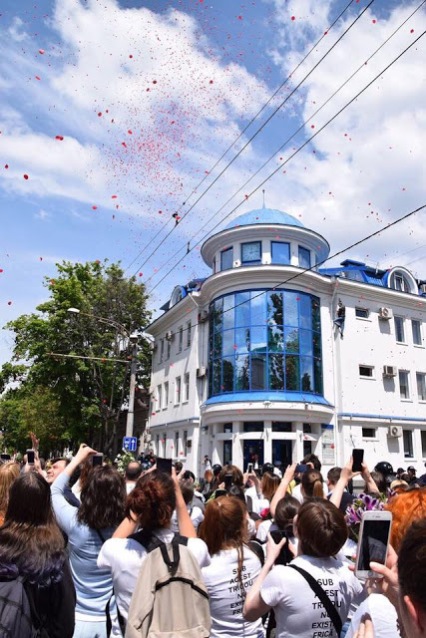 Both marches reached Alexandri Street simultaneously, but from different sides of Bucuresti Street. Police, after briefly conferring, ordered the participants of the Fără Frică march to be taken away by bus.

Deputy Head of Police Gheorghe Kavkalyuk told NM that the police had previously agreed with the organizers of the march that the procession would end at Alexandri. Later, the organizers denied this.

People reluctantly got onto the buses. Many tried to photograph Orthodox believers through helmets of policemen and, getting onto the buses, waved bouquets of flowers at them.

The Orthodox believers sang “Christ is Risen from the Dead.” The chanting was occasionally interrupted by the slogan “Leave for Europe and fuck there.” Someone tried to sprinkle gays with holy water, but it ended up drying on police flak jackets.

When the buses with LGBT activists and their supporters began to leave, participants of the “family march” began to buzz and tried to break through the cordon. The police were stronger. In the course eggs were thrown, though in the end they did not reach their targets.

Disappointed Orthodox sang a farewell “Christ is Risen,” put down their anti-gay posters and headed for the central square, leaving behind about a dozen young people in clothing with symbols of the right-wing organization Noua Dreapta (“New Rights” – NM). These young people tried to attract the attention of the press and the police with homophobic shouts, but in vain. The police hurried to the buses, and journalists — to the press conference of the march.

An hour after the start of the march, the press conference of the NGO Genderdoc-M, the organizer of the marches in support of LGBT people in Moldova, was held at the Best Western Hotel. Executive Director Anastasia Danilova congratulated everyone on the “most peaceful and numerous march” in support of LGBT people which had ever taken place in Chisinau.

According to her, an exact number of participants will be given by organizers later, but about 500 T-shirts were given out on the march. This makes it possible to speak of its growth. Last year, 300 people took part in the march.

This march was, according to the organizers, the safest. “Where there were eggs, now — a rain of flowers,” Danilova smiled, referring to the rose petals that unexpectedly landed on the march from the window of an office building. “We have once again marched the five blocks of freedom, and this was also the outcome last year. We hope that next year we will go further, “she said.

“I will say only one thing: love and do what you want,” concluded another participant of the press conference, Artem Zavadovsky.