In Chisinau, Moldova, on May 21, the LGBT solidarity march Fără Frică (No Fear) will be held. Politician Grigory Petrenko is planning to take part in it. In this column for NewsMaker.md, he explains how he reached this decision. 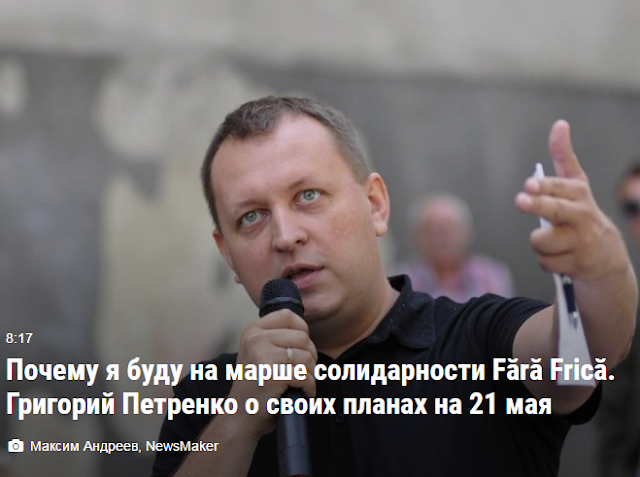 “Rather than fight the regime and direct its energy toward protest against [oligarch Vlad] Plahotniuc and his mafia, the so-called opposition is again struggling with imaginary threats, diverting attention away from the real problems by switching to all kinds of artificial, imaginary threats. At the risk of causing a barrage of criticism and all sorts of jokes, I am absolutely sure that the Fără Frică march, which will take place this Sunday, poses no threat to society, nor to families, nor to Orthodoxy – nor to anyone. People come out to say that we should not be afraid! Don’t be afraid, we are all different, don’t be afraid of persecution, you should not be afraid to be yourself! This is a challenge to the fear and hatred which surrounds Moldovan society today.

“I believe that citizens should have the right to freedom of expression, even if someone doesn’t like it. Many are winning applause and scoring hundreds of thousands of likes on social media by promoting hatred, prejudice and exploitation of unsubstantiated fears. Including politicians. This is true of extreme right-wing populists and politicians throughout the world. In Moldova, the overwhelming majority of them are irresponsible false populists! I do not want to be populist. So now I write what I think, and not what many would like to hear from me.

“We have no left-wing parties. No left-wing party, not only in Europe but throughout the world, would allow itself to oppose a peaceful rally, encourage its activists to throw eggs at people just because they are a different sexual orientation. This is barbarity and obscurantism. It has nothing to do with socialist values. I have a general impression that some are stoned on incense from standing in the churches. Call yourself whatever you like, “Kantaryana witnesses,” Markela, Chibrika, etc. Just do not call yourselves socialists, leftists, etc.

“We have no pro-European parties. Not one leader of the so-called pro-European forces will participate in the solidarity march. They fear for their poll ratings. They think about the presidential election. For them, conforming to populism and complying with traditional conservative ways of Moldovan society is more important than human rights.

“About this the party in power generally keeps quiet. Plahotniuc and his mafia are rubbing their hands together. Their cutbacks and violent schemes continue to operate while the so-called opposition withdraws from all real struggle against the regime.”

I wrote those lines a year ago.

Since that time the country has gained a “popularly elected president.” During the same period, several tens of thousands of people have left the country. The citizens of the country have become poorer, and Plahotniuc and his clique even richer. And the worst thing is, in this year we have not ceased to hate each other. We continue to believe that we are normal and all others who are different from us are just sick people.

“How can you today, in the 21st century, be a communist?”

“How can they meet with Arabs? Don’t these girls realize that they will spend their lives in a harem?”

“These old farts are so arrogant, isn’t it time for them to retire? Make way for the young!”

“How can you be a unionist and desire the destruction of your own country?”

“Why do these Muslims have a mosque in Chisinau? We are an Orthodox country!”

“What’s wrong with this driver? She’s a woman — a monkey with a grenade!”

“They walk hand in hand. Have they completely lost fear?”

Our list of phobias and prejudices can go on and on. We are drowning in them. We continue to blame others for not being like us. For some reason we think of ourselves as a benchmark, and all others as abnormal. We learn nothing from history, and we begin to believe in our superiority over others, who are not like us.

This year I will go to the Fără Frică solidarity march.

In the 22 years since its adoption in the Council of Europe, none of the leaders of political parties [in Moldova] have dared to stand in a row with people belonging to the LGBT community.

Unfortunately, we only continue to speculate about European values ​​and human rights, but on the day of the Fără Frică march, party leaders think only of their poll ratings. I hope that my example will be followed by others.

We are slowly but surely seeing the whole country immersed not only in the quagmire of poverty, corruption and lawlessness, but we also do not notice as our secular society is transformed into a testing ground for priestly-clerical structures, seeking to control everyone and everything, and masquerading as guardians of traditional values and morals.

As long as we live in fear, seasoned with prejudices and populism, we will not get out of the swamp that we’re accustomed to living in.

I do not want to be populist and I speak out against obscurantism. I am for a secular state, and I believe that human rights are paramount.

I’m not afraid to say what I think. That’s why I’m going on the march of solidarity.

The author is the leader of the party “Our Home is Moldova” (Red Bloc).