On April 22, communists of the Moscow regional branch of the United Communist Party (OKP), together with representatives of the Trade Union of Migrant Workers, made their traditional visit to Gorki Leninskie* to honor the memory of the founder of the world’s first socialist state.

First we laid flowers at the monument to Ilyich, with an odd number as a sign that Comrade Lenin is forever alive in our hearts. Then we got to work — this time we had to plant cherry trees, which will eventually grow into a beautiful grove. After the subbotnik, we went on a tour of the estate, where we got acquainted with the way the leader of the proletariat lived and worked in his last year. Once again, we were surprised at how modestly Lenin lived: even food for his family he purchased with his own money, so there were no delicacies — the food was very simple. We were surprised how carefully Lenin treated the cultural heritage of our country; after moving to Gorki, Lenin ordered that nothing be changed on the estate and everything left as it was under the previous owners. 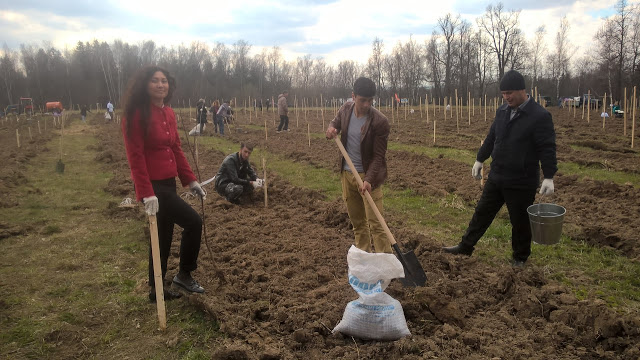 We would like to thank the administration of Gorki Leninskie Museum for providing lunch for those who worked on the project, and for offering free tours on Ilych’s birthday. The communists of the OKP will continue to visit Gorki to maintain order there, as well as organizing to prevent the redevelopment of this valuable historical location.

On April 23 in the Moscow region, activists from the OKP and KPRF laid flowers at the monument to V.I. Lenin in the former A.M. Rudoy factory [in Ivanteevka]. For the communists cherish the memory Vladimir Ilych. But even dearer to us is Lenin’s cause — the construction of a communist society, in which there will be no wars, famine and poverty. And this society will certainly be built — if not by us, then by our descendants.

*Translator’s note: Gorki Leninskie was the estate of a Tsarist official in the 19th century. It was nationalized and turned into a sanatorium (long-term health care facility) after the 1917 revolution. Lenin spent the last 10 months of his life there with his family. It was converted into a museum on 1938.