Translator’s note: Since the discovery of the plaque three years ago, the website Grenada.md and activists involved in its recovery have parted ways with the reformist Party of Communists of the Republic of Moldova (PCRM )and today stand with the new communist party Red Bloc (Our Home is Moldova). Grenada editor Pavel Grigorchuk, seen in the video, is a member of the “Petrenko Group” of seven political prisoners currently held under house arrest by the oligarch regime. 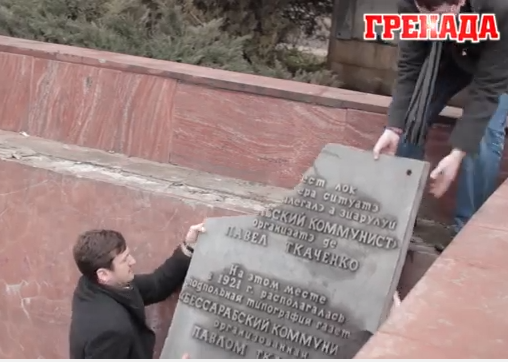 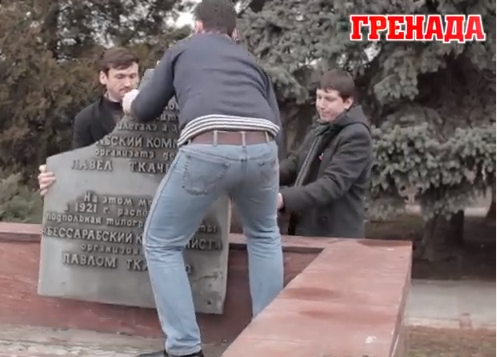 This refers to the political struggle of the Bolsheviks in the period of the first Romanian occupation of 1918-1940, when the activities of the Communist Party in the territory of Bessarabia, as well as all of royal Romania, were banned. Pavel Tkachenko is a legendary figure in the history of the communist movement in Moldova; he was also the first leader of the Komsomol [Communist Youth] of Moldova, editor of the newspapers “Bessarabian Communist” and “Bolshevikul Basarabyan,” which he founded. Later, the Romanian secret service brutally killed Pavel Tkachenko [on September 5, 1926].
The commemorative plaque was transferred to the editorial office of the newspaper “Communist,” also the headquarters of the Grenada website. We are currently searching for specialists who can restore the memorial plaque, as well as searching for images of the complete plaque. One possibility is to create a new plaque and install it in the same location through the PCRM faction in the Chisinau Municipal Council.
Special thanks to Ivan Munteanu, who helped carry the plaque to the editorial office.
Source
Translated by Greg Butterfield