The Red Guard, which later became the Red Army, was created as a force capable of resisting market capitalist relations, to subdue the capitalists and the bourgeoisie to the interests of the proletariat and defend the socialist revolution and its gains.

The same thing happened during the Great Patriotic War — the Soviet people not only defended their homeland from invaders, they defended the gains of the proletariat and progressive humanity from the most extreme and wild forms of manifestations of capitalism — Nazism and fascism.

In the 1990s, when the homeland of the Soviet people was destroyed, the post-Soviet bourgeois states began the predatory restoration of capitalism and the market economy, which included privatization of the people’s plants and factories, cuts in social guarantees and rights, the destruction of affordable education and commercialization of healthcare.

And this process, the turn to the capitalist market, hasn’t stopped and continues to worsen the situation of working people, exacerbating the socio-economic crisis, which eventually leads to political crisis and civil war.

Those who voted in a referendum against the collapse of the Soviet Union, those who came out in 1993 to protect the Supreme Soviet, those who opposed Yeltsin’s neoliberal course, the young people who entered and continue to enter into open resistance and struggle against far-right brutes, those engaged in education and cultural development of the masses — all of them are defenders of the social gains of the Soviet system, defenders of the socialist homeland, which we lost, but will rebuild in the future!

To remember — means to fight. 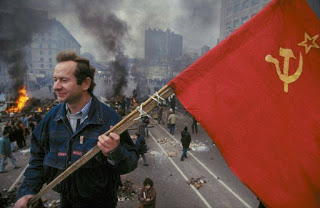