Nadyezhda Kenich is 20 years old; she was born in Popasnaya, Lugansk region. When the Ukrainian army came to her land — here in Donbass they are considered occupiers — she took up arms. Thousands of young people, boys and girls, took up arms. For them, the struggle against fascism is not a phrase from the history books, and their everyday life is full of danger and heroism.

Alexey Albu: Nadya, tell us how you joined the militia?

Nadyezhda Kenich: I joined the militia in April 2014, when the Kiev authorities sent Alpha riot police to our cities and towns. I began to actively help the people who rose in defense of Donbass. I took up arms on May 23, 2014, in Severodonetsk. I was 18 years old. I joined the regiment of Pavel Leonidovich Dremov.

AA: What prompted you to go fight? After all, many of your contemporaries and peers left the war zone.

NK: It so happened that Popasnaya remained under Ukrainian occupation and all active participants of the Antimaidan movement were declared wanted, including me. From the beginning, I started receiving threats from Ukrainian nationalists, that my family would be killed, that my sister would be allowed to stew … you know, everyone saw what happened in Slavyansk, Kramatorsk, and we didn’t want the same thing to happen in Popasnaya. I have a little sister, I don’t want her sitting in jail. I want the people to be able to live quietly in their town, calmly walk into the forest, and not be afraid of explosions, the whistle of bullets … that our children would never have to see what happened in Slavyansk, Kramatorsk and other hot spots at that time. Naturally, I couldn’t put up with it and took up arms. I just couldn’t act differently. All my friends say they are not surprised by the fact that I’m here, because I’m always trying to stand up for other people, I have a very keen sense of justice. Probably so. (Laughs) 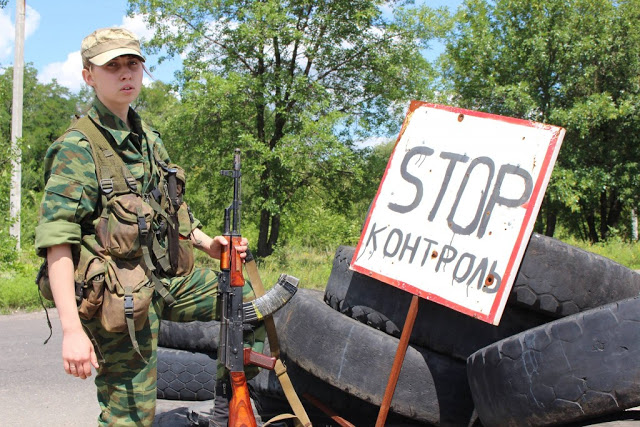 I really resent that many local men fled to Crimea and other regions of Russia. I understand when women or teenagers leave. Although many teens are here with us and help however they can, for example, repairing equipment. And many who could take up arms, unfortunately, abandoned us.

AA: What do you do in the militia? What’s included in your tasks?

NK: I am now in a howitzer division. Since I spent two months learning from the signalman, I make the connection, do the adjustment of fire. Prior to that, I spent six months in intelligence. 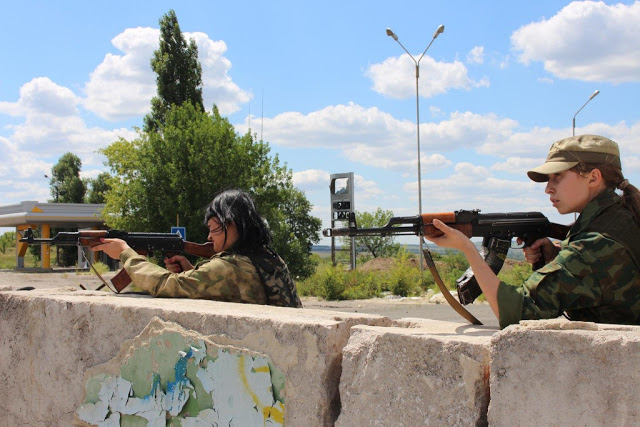 AA: What was the worst moment during your service?

NK: In the town of Pervomaysk, early last August. There had already been fighting in the city, they came to the city, blockaded the roads with their armored vehicles, and set up snipers on the outskirts. We arrived, disorganized, and scattered in all directions: Some into the woods, some on the outskirts, some on the streets, trying to figure out what’s going on… And I began working as a sniper. I was just given a “scope” (on a helmet) ata moment’s notice, but I took it, because most were engaged in other tasks. And when the shooting started, I fell under a tree, and tried to escape. I hid my head behind a branch. And at that moment a bullet whistled past the branch where I was trying to hide, and a piece of branch scratched my nose. At this point, my insides turned upside-down. I realized that I was born under a lucky star. Neither the “grads” or “cornflowers” – both of which have exploded quite close to me — nothing compares to that moment. I will remember it for the rest of my life.

AA: Did you take prisoners?

NK: I had to participate in their arrest. I didn’t take anyone independently. We detained various subversive groups, spotters… As a rule, the information about them is given by local residents. We watched them, and if the information was confirmed – we detained them. Captured their safe houses, cellars, where they were hiding. Then, however, they start whining that they got here accidentally, that it’s a misunderstanding.

AA: During detention and interrogation, was there torture? How are prisoners of war treated?

NK: During the arrest, force is only used in case of resistance. And at the interrogations we always start talking neutrally. Thirsty – please drink. The toilet — no questions asked. Cigarettes — take. The food was the same that we ourselves ate. But during questioning, if we have irrefutable evidence, and the person refuses to talk, it is necessary to speak in a different tone. But, of course, no needles under fingernails, no poking with sticks, no hanging on the rack or ears cut off. (Laughs)

AA: Can you tell me about any specific case?

NK: I remember a case when we detained a spotter. We watched him for a long time We had irrefutable evidence that he was involved in the shelling of peaceful neighborhoods. So during his interrogation, he began to tell me that he accidentally got here, lost in Severodonetsk, and was not involved in the war. Even though we found topographic maps and a passport with a residence permit for Kherson. It was obvious that he was trying to make fools of us. In the passport, we found a picture of his family, we showed him and asked: “Don’t you want to see them again? We’ll lock you in the cellar and you won’t know when you’ll be able to see them. Is your service to the state worth it? Let’s work together somehow.” Apparently, it worked on him heavily and he confessed everything. He said that his military superiors warned that if he disobeyed they would destroy his family. So he agreed to carry out their orders.

AA: You saw the Ukrainian neo-Nazis?

NK: Yes, several times through the scope. (Laughs) I can tell you about the first. We watched one group, they were photographed with arms and a flag, upon which was a fascist cross. I was so upset at the time for my great-grandfather, who was killed by the Nazis, that I quickly sent him to Valhalla. Many say you will be tormented with remorse, or that it will haunt your dreams, but nothing of the kind has happened to me. I do not regret a single gram. A good Nazi is a dead Nazi.

AA: What would you like to say to the Ukrainian authorities?

NK: (censored). Stop thinking about yourself. There are people’s lives at stake. Enough of filling their pockets with money from the war. You know, as they say, happiness can’t be built on someone else’s misfortune. We all understand that war is big money. They are earning millions from our lives.

AA: What would you like to say to the Ukrainian troops, standing on the other side of the front?

NK: If they are draftees, we all understand that they did not come willingly, they were sent. Still, I believe that each of them has a choice: remain a slave or think for themselves about what is happening. If they do not agree with the ruling regime in Ukraine, they can stand shoulder to shoulder with us. By the way, many of them understand the situation and go over to our side. I can’t say en masse, but there are such cases.

AA: What are you fighting for?

NK: For my family, for the people of the town, for freedom, for a new country.

AA: What would you like to see after the victory?

NK: Everything as it was before.

AA: As before — like under Yanukovych? Or as in the Soviet Union, or in Tsarist Russia?

NK: I would like to have peace, a return to when there was order, everyone had a job, had an opportunity to realize themselves. When all young people had the opportunity to go to college and get an education, and all pensioners received a normal pension, not pennies 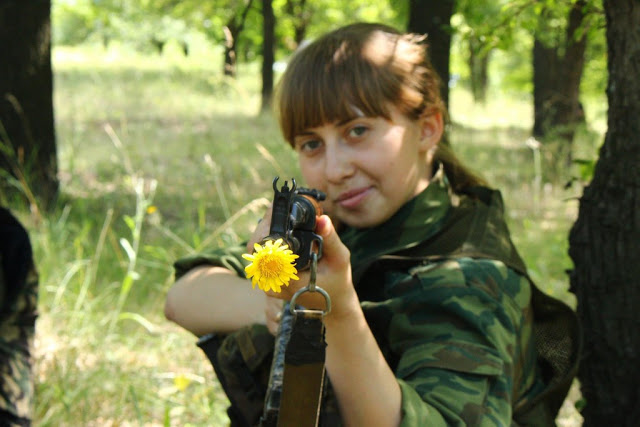 2 thoughts on “20-year-old militia woman from Lugansk: ‘A good Nazi is a dead Nazi’”