Donald Trump, the leading presidential candidate of the U.S. Republican Party, is a regional oligarch of the USA based in New York City. He created his empire with money inherited from his father Fred Trump, who was also a real estate developer. Today he owns large buildings and gambling casinos in several U.S. cities and internationally. He is a wealthy capitalist, with a fortune estimated at $2.7 billion in 2011. However, he is not among the powerful inner circle of the U.S. ruling class.

Trump’s fortune is based on what is called “gentrification” in the United States. This means, raising prices of real estate in urban areas to push out poor and working-class people, especially nationally-oppressed African American, Latino, Arab, Asian, Indigenous and Middle Eastern people. From the beginning of his business in the 1970s, Trump had a reputation for discrimination against Black people.

Trump first came to national prominence in 1989. He was part of a conspiracy by the New York Police, city and state officials, and real estate developers to falsely accuse five Black and Latino teenage boys for the rape and beating of a white woman in Central Park. Although there was no evidence to arrest or convict the five youths, they were tortured and forced to confess. All of them received long prison terms. The case of the Central Park 5 was used to create an atmosphere of fear and racism in the city to justify increasing the number of police, and to further the gentrification of poor neighborhoods. The Central Park 5 case became a template for racist campaigns in cities across the U.S.

At that time, Trump famously took out full page advertisements in all the major newspapers calling for the five youths to be put to death. Many years later, the true criminal confessed and the five men were freed from jail. But Trump still claims they are guilty. (The struggle to free the Central Park 5 youths was led by Elombe Brath, a communist and Pan Africanist.)

Trump became a media celebrity. He was known for his outrageous behavior and lavish lifestyle, much like the Ukrainian oligarchs we hear about today. From 2004 until early 2015, the NBC television network, owned by major arms manufacturer General Electric, gave him his own reality television show, “The Apprentice,” which further increased his fame.

Trump has received an overwhelming amount of media attention, much of it positive. He is presented as being “plain spoken” – by which they mean he openly says the racist and hateful things the other candidates cannot say or say in “code words.”

The capitalist media use Trump as a tool to say outrageously racist and offensive things they wouldn’t dare openly say themselves. His reputation for crass sexism and racism has made him popular with the most backward elements in U.S. society, especially among the ruined middle classes that aspire to wealth, white workers infected with racism, and the police.

Trump angered Latino people by calling Mexican and Latin American immigrants “drug dealers, rapists and criminals” who should be expelled from the U.S. (There are currently many, many immigrants and refugees fleeing from U.S. –sponsored wars and neoliberal policies in Latin America, including children and families, who are being imprisoned and deported by the Obama administration.)

After the Paris attacks, Trump called for banning all Muslims from entering the United States, and even from stopping Muslim U.S. citizens from returning. He has called for a database registration system for Muslims, very much like the Nazi registration of Jews or the apartheid South African passcode system.

Trump is an enemy of workers and unions. Currently, Trump has gone to court to prevent workers from forming a union at his Las Vegas casino, the Trump International Hotel. On the other hand, he has support from police “unions” like the New England Police Benevolent Association, which shields cops from facing charges of police brutality. This reflects his support for the epidemic of police killings and beatings of African Americans and other nationally-oppressed people.

Few people took Trump’s campaign seriously at the beginning because of his reputation as an egotist and buffoon. However, the combination of vast media attention and the capitalist crisis of unemployment and low wages has created fertile ground for him, and a proto-fascist movement has begun to coalesce in support of his campaign. This has included increasing violence by supporters against protesters at his campaign rallies, and acts of terrorist violence by those who support him and his rhetoric (against Muslim communities, women’s health clinics, etc.)

Fascist and white supremacist groups have stated that Trump’s campaign is helping them to recruit new members. Overall, he is emboldening fascist elements (like the neo-Nazis who shot protesters in Minneapolis in November) and the repressive forces of the state, especially the police. 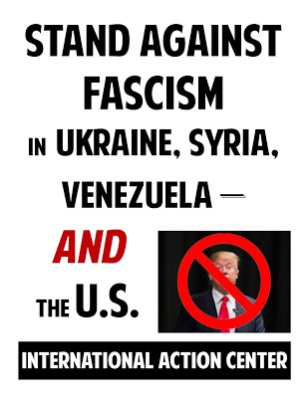 Today what Trump says is the lead political story in all major media in the U.S., even those which claim to be critical of him. (It is interesting to note that another candidate who is drawing large crowds, the liberal-social democrat Bernie Sanders, has received only a small fraction of the media attention Trump has.)
The favorite candidate of the U.S. ruling class is Hillary Clinton, who is close to Wall Street and the arms manufacturers. So why is the media promoting Donald Trump so much?

Trump is a demagogue who delights in sowing hatred. During his campaign this year he has made offensive comments about women and disabled people, as well as immigrants, Muslims and Black people. His role is to divide the working class, especially to make economically struggling white workers lash out at immigrants, Muslims, Black youths – anyone but their real enemy, the capitalist class.

The U.S. ruling class is worried by the resistance that has emerged in recent years, both at home and internationally. Now another economic crisis is looming. They want to push back the trend of workers and young people in the U.S. to organize and fight back independent of the two-party electoral system: Occupy Wall Street, the Fight for a $15 per hour minimum wage, and especially the Black Lives Matter movement against police killings. The fascists coalescing around Trump’s campaign are a militant counterweight to these movements.

Also, because Trump dominates the entire political discussion in the United States, he is pushing everything to the right, which helps President Obama, Hillary Clinton and the Democrats, who don’t want to talk about the issues raised by Black Lives Matter or Fight for $15.

Trump has made statements critical of Obama’s foreign policy in relation to Russia and the Middle East, and has also criticized the Bush administration for the war in Iraq. This has created confusion and even led to some friends of Donbass and Russia internationally supporting Trump. There are several problems with this.
1) Trump is appealing to far-right and fascist elements in the U.S. that want an “isolationist” foreign policy (not, of course, an anti-imperialist one). Some of these forces look favorably on bourgeois nationalist regimes, whether Putin’s or in the Middle East, much like Sarkozy and the National Front of France have sided with Putin on Ukraine.

2) Trump immediately contradicts his supposed anti-interventionist stand by denouncing Muslims and immigrants as “terrorists” – using the same rhetoric of all U.S. wars of this century. Trump criticized Dick Cheney for the war in Iraq, but he was a cheerleader for war after the 9/11 attacks in New York in 2001, and today he still spreads the lie that Muslims in New Jersey cheered the 9/11 attacks.

3) If Trump were elected, he would be in no position to pursue an independent foreign policy, even if he wanted to. Like Obama, Clinton or Sanders, he would have to follow the interests of Wall Street, Big Oil and the arms manufacturers. The U.S. ruling class has invested decades in undermining independent regimes in the Middle East and building up NATO for regime change in Russia. It is a fantasy to think that would change under a Trump presidency.

4) Most damning for us, as Marxists, anti-fascists, and anti-imperialists, Trump’s rhetoric of division disarms the working class, the only real force that can stop imperialist war. Increased racism and Islamophobia in the U.S. can only give the ruling class a freer hand to make war wherever and whenever they wish.

Those commentators and journalists who support Trump because they think he will be friendly to Russia are ignorant of his history or politically naïve. They are not helping the people of these countries by championing Trump. They are misleading people. They also make it more difficult for us to build solidarity among the U.S. working class with the anti-fascists of Donbass and Ukraine. Black people, immigrants, Muslims, union members, and any worker with a shred of class consciousness understands in their bones that Trump is dangerous and will recoil from “anti-imperialists” who support him.

It would not be out of place to point out that those organizations and activists in the United States who have been working hardest to build solidarity with the people of Donbass, Ukraine, Russia, Syria, Kurdistan, Libya, Venezuela and Palestine are also among those leading the struggle against Donald Trump. We know from harsh experience who Trump is and what he represents.

We have always said that any manifestation of fascism and its main American variant, white supremacy, must be met with militant resistance and unity. That is why the communists and anti-fascists in the United States are building an independent struggle to push back Trump, while educating our class about how he actually aids the “mainstream” warmongers of the Democratic and Republican parties. 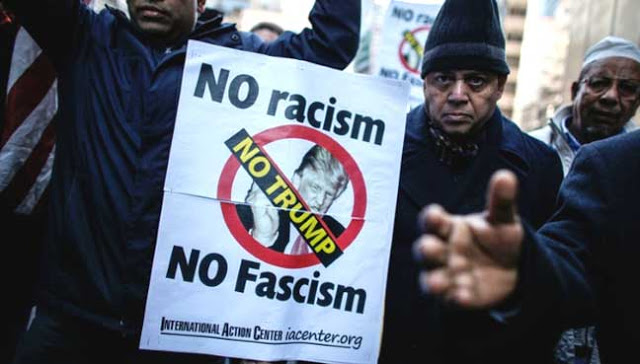 No to racist Trump and his media megaphone

One thought on “Oligarch Donald Trump: Enemy of U.S. workers, no friend to Russia or Donbass”