On November 7 in Moscow, the United Communist Party (OKP), its allies and friends planned to hold a “Red March” under the slogan, “There will be a New October!”

City authorities, in violation of the law, banned the march. In response to the actions by Moscow City Hall, hundreds of people gathered at the appointed time, lined up in a column and made ​​a “Red Walk” of revolutionary Krasnaya Presnya street. Unable prevent this, the police brought a large number of buses with riot police and cordoned off the street and surrounding blocks with Interior Ministry troops. During the “Red Walk,” propaganda materials were distributed to Muscovites, including motorists, who welcomed the marchers.

The “Red Walk” ended with a rally on Krasnopresnenskaya Zastava Square. Among the speakers were OKP members: party leader Vladimir Lakeev, central committee members Dennis Sommer and Daria Mitina, and other comrades. Several revolutionary songs were performed by the poet and leader of the band “Echelon,” OKP activist Dmitry Black.

Many OKP activists from the Moscow region were in Moscow, celebrating the Day of the Revolution together with comrades from the capital. However, in Ivanteevka outside Moscow, the communists held their own event. In the building of the CDC “Day,” a gala was held in the evening organized by the OKP, the Communist Party of the Russian Federation (KPRF) and the Union of Soviet Officers. Professor A.V. Baranov, in his speech, dispelled many of the myths of the current propaganda about the October Revolution and the Soviet period of our history. The concert included poems and revolutionary songs.

More photos of the Red March

In Leningrad, the communists traditionally celebrated the October Revolution at the majestic statue of Lenin in the eponymous square. The rally was co-organized ​​by the United Communist Party and the Rot Front party.

Speaking on behalf of the OKP at the rally were: Secretary of the City Committee Andrei Terentyev, member of the City Committee Alexander Pechenkina, and party supporter and member of the Legislative Assembly Deputy Irina Komolova. One of the two chairs of the rally was First Secretary of the Leningrad Regional Kirill Vasiliev (comrades from the regional districts also came to the city of three revolutions).

In addition to members and supporters of the OKP and Rot Front, the floor was given to representatives of trade unions of dockers and pilots, the Left Front, and the “Other Russia” party.

The event ended with a grand fireworks display.

In the Chelyabinsk region, festivities involving the OKP were held November 7 in the regional capital and in the city of Miass and Emanzhilinske.

In Chelyabinsk, the demonstration and rally were held with the participation of the United Communist Party, Rot Front, “Communist Russia” and various opposition and public organizations.

In Miass, organizers of the demonstration and rally were: United Communist Party, Rot Front, “Communists of Russia”, the city council of veterans organization, “Memory of the Heart.” Interestingly, the acting head of the city attended the march. He did not stay for the rally. 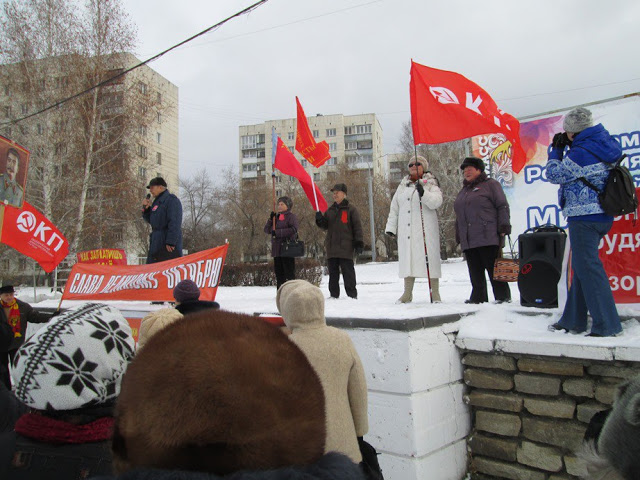 In Emanzhilinske, activists and supporters of OKP laid flowers at the monument to Lenin.

In Ivanovo, representatives of the United Communist Party celebrated November 7th by participating in a picket near the monument to the fighters of the Revolution of 1905, initiated by the Left Front.

Here the communists and other leftist organizations marched through the central streets of the “capital of Siberia.” November 7 was the debut event for the young branch of the OKP. Party members joined the united revolutionary column, organized at the initiative of the Novosibirsk branch of the Russian Young Communist League (RKSM). In addition to RKSM and OKP, the column included members of the Rot Front, All Union Communist Party (Bolsheviks) and AKM. Chanting revolutionary slogans, the Communists marched from the House of Officers to Lenin Square, where the rally was held.

In the capital of Khakassia, Abakan activists of the United Communist Party held a series of pickets on November 7, reminding residents about the Day of the Revolution. It must be said that the local police showed composure and restraint when the protesters with red flags moved through the streets, met each other, and exchanged handshakes and congratulations. However, congratulations were addressed not only the Communists, but to all inhabitants of the republic.

Abakan motorists greeted a car waving the flag of OKP with honking horns.

On the eve of Revolution Day, the newspaper of the Vologda branch of the United Communist Party issued a leaflet, briefly explaining the political stance and demands of the OKP. These materials were distributed to participants of the November 7 regional left rally.

On November 7, activists of the newly established Penza branch of the United Communist Party, as well as local anarchists, joined the festive event initiated by the youth organization “New Generation.” This organization was established by friends of the OKP, youth who have left the Communist Party of the Russian Federation and the Zyuganov Komsomol.

The demonstrators gathered in the square near the “Cuckoo” clock tower, and then proceeded under red flags to Soviet Square, chanting revolutionary slogans on the way. Demonstrators held signs reading: “Socialism or death!”; “Down with the bosses and landlords, capitalism will not die by itself”; “Our choice is freedom! Return power to the people!”

The march ended at the monument to Fighters of the Revolution, which symbolizes the drama of the revolutionary struggle, its driving forces — workers, peasants, soldiers, united under the red flag. There, participants laid flowers and held a festive rally.

Among the speakers at the rally were OKP representatives Mikhail Yakhkind and Pavel Arzamastsev.

On November 7 activists of the United Communist Party attended the rally dedicated to the 98th anniversary of the Socialist Revolution in Russia. The meeting was organized with the support of the Russian Communist Workers Party (RKRP), OKP, the Union of Soviet Officers and other organizations.

November 7 in the city of Tambov, members of the United Communist Party, the party “Communists of Russia” and sympathizers held a joint laying of flowers at the monument to Vladimir Lenin.

The regional office of OKP hopes that inter-party cooperation will only deepen in the future, and the ranks of the proletarian vanguard communists stand together, shoulder to shoulder.

In several cities in the country, party activists pasted stickers and leaflets, congratulating the people on the Day of the Revolution. Among these cities was Sevastopol.

Compiled by the press service of the Central Committee of the OKP on November 8, 2015