Posted on September 24, 2015 by allpowertothesoviets

September 24: On Thursday evening, supporters of the Party of Socialists of the Republic of Moldova (PSRM) and Our Party* pitched tents in front of the parliament building. 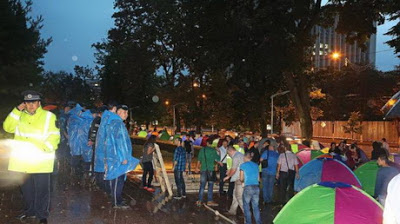 The protest started early because the Yes Platform, which tried to prevent the protest, said it would set up its own tents there on Saturday.

On the sidewalk in front of parliament more than 50 tents have been erected, and a stage is set up in front of them.

“Some of our activists have come out with an initiative to set up tents in front of Parliament today and we, as the organizers of the protest, support this decision. Now there are about 60 tents set up — 30 from Our Party and 30 from PSRM.

“All issues with the police are resolved, the stage is set up. We are looking forward to seeing people on September 27 for an indefinite protest against the criminal oligarchic regime in Moldova!” said Our Party leader Renato Usatii, quoted by the party’s press service.

“The Party of Socialists and Our Party are ready for the protests. This is only the beginning. After September 27, our numbers will be much greater,” PSRM leader Igor Dodon posted on social media, along with photos of the tents in front of parliament.

Earlier, Igor Dodon and Renato Usatii announced an open-ended protest will begin against the current government on Sept. 27. Later, the Yes Platform said it would prevent the organizers from setting up the tent city and protesting in front of parliament. After this scandal, the Yes Platform was accused of opportunism with the regime.

*Translator’s note: the PSRM and Our Party are left-leaning opponents of European integration. They were rebuffed by the rightist, pro-EU leadership of the Yes Platform.